At 36, Mike Pyle is Aging Like a Fine Wine

"You have to work hard and they really bring out the best in you. I'm
always improving and I'm going to be around here for a long time." - Mike Pyle 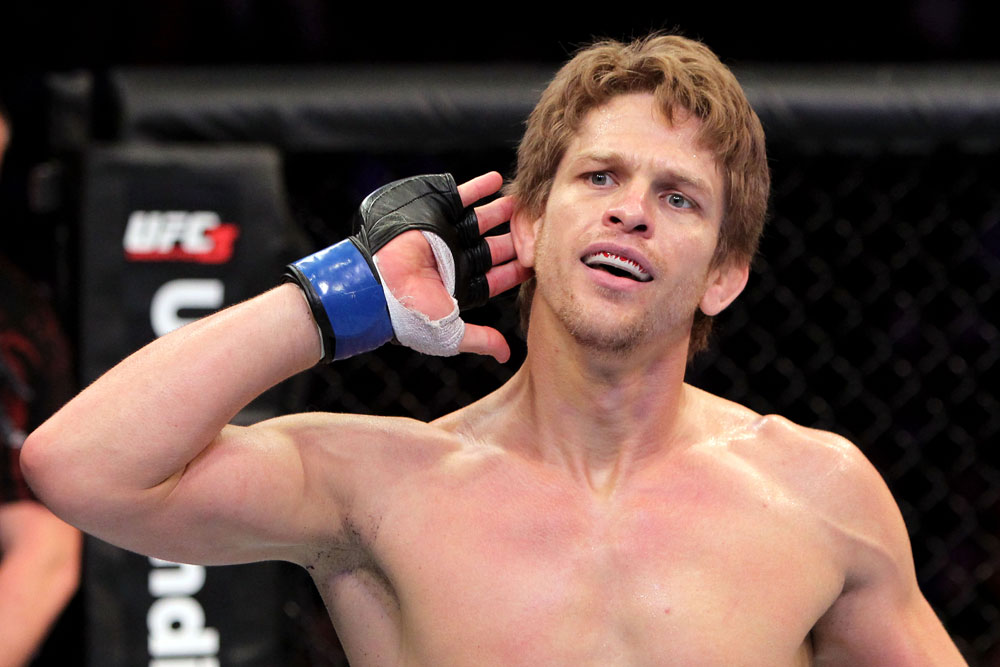 It’s a very real possibility the “Fountain of Youth” is at Xtreme Couture MMA on West Sunset.

On January 14th, a 36 year old American submission artist trained at the heralded gym in Las Vegas, Nevada, walked into the Octagon in Rio de Janeiro, Brazil sporting a full head of hair and landed a thunderous right hand followed by a pair of knees, which concluded the contest in just 82 seconds - his fastest of five wins in the UFC. With 31 professional fights on his record dating as far back as 1999, Mike Pyle appears to be entering his prime. After competing in every MMA company under the sun on just about every continent, Pyle’s journey as a cagefighter is only just beginning as a featured welterweight in the UFC.

“I've been everywhere,” tells Pyle. “I'm international. I've fought in every organization out there. I've been treated good and I've been treated bad. I've been in wars and I've been in quick ones. I have all this experience under my belt. When I came to the UFC, I realized this is where I want to be. This is what I've worked all these years for to be in an organization that can help you with promotion that other places do not do and the competition is stiff. You have to work hard and they really bring out the best in you. I'm always improving and I'm going to be around here for a long time.”

The 22-8-1 Tennessean joined the UFC just over three years ago as a short notice replacement against Brock Larson at UFC 98. Since, Pyle has gone 5-3 inside the Octagon, recording his most recent victory with a devastating TKO over Ricardo Funch at UFC 142. With 22 total wins and 16 of them by submission, it may have come as a shock to many that the BJJ brown belt packed the type of wallop he showed against the Brazilian in front of his countrymen. But he gladly attributes this new found power and overall improved athleticism to the evolution of his opponents as well as his staunch desire to be a fixture in the UFC for years to come.

“If you look at my record, I think the reason why there are bigger gaps in my submission wins is because everyone is getting better,” admits Pyle. “People aren't just getting caught in armbars anymore. Everyone knows the little tricks that I used to use. Everyone has good wrestling, good jiu-jitsu for the most part, and are good at striking. Everyone is well-rounded. I was able to rely on my jits back in the day to get those quick subs. But the best are in the UFC and they're going to kick your ass if you're not on top of your game, so I have to be on the top of my game. I'm older, I'm experienced, and I'm learning about everything, from what I should be eating, resting when I should, and paying attention to my career more in-depth. The UFC is to blame for that. It's keeping me fresh, looking and feeling better, and I feel like I have better tools and am more dangerous to an opponent more than ever now. The UFC brought that out in me. You can't go in there and slouch or you'll be out of there and you'll be fighting for one of the lower class shows and I don't want that. That's not going to happen.”

As mentioned, Pyle is normally thought of as a grappler, but an impressive and quick TKO stoppage of Funch, who had never lost that way before, should change that perception. “I really wanted to display that I do have the striking skills to put someone away,” says Pyle. “My striking hasn't really come through yet up until that point. The way the fight went was exactly how we had predicted it to go and we prepared for it to go, to catch him with a good straight right hand. I got in his face, hit him, and hit him hard.”

Up next for Pyle is a date with Josh Neer on June 8th at UFC on FX 3. The young veteran Neer is on a two fight win streak inside the Octagon and on a six fight win streak overall. At 29 years old with a record of 33-10-1, “The Dentist” is a well-rounded, sure-fire finisher with 29 stoppage victories, including his most recent guillotine choke over Duane “Bang” Ludwig in January. Neer has a remarkable amount of experience as well as a formidably offensive style, standing and on the ground, plus a near granite chin.

“Well, first of all, I have to give the guy a lot of respect in his experience and how tough and gritty he is,” asserts Pyle. “He always comes to fight. He always comes to give a good show. I think he's quite insulted if a punch misses him in a fight. He's probably one of the more hard-nosed guys out there right now - he's tough. He wants to fight. He wants to be in your face all night and I think that's a good fighting challenge for me in how to work with his aggression. He's very aggressive. I'm looking for a good three round war with the guy. Not many people have put him away, so I don't have that in my head that I'm going to dispose of him like I did with Ricardo Funch. That's very unlikely to happen to Neer because of his experience, how tough he is, and how he can take a punch. I'm looking forward to that challenge of what type of fight he's going to want to make it into and I think it will bring out the best in me.”

While his home base is still Xtreme Couture MMA, training with fellow fighters like Martin Kampmann and Jay Hieron, a huge part of Pyle’s ongoing transformation is a new head coach in Nate Pettit. Hailing from Boise, Idaho, Pettit used to operate The Idaho Elite Training Facility before moving to “Sin City”. Also, Pettit brought in BJJ black belt Mitch Coats from Alliance Jiu-Jitsu in Boise to help sharpen Pyle’s already versatile ground game. Previously, “Quicksand” was intrigued by Pettit while watching him work with another fighter at the gym, but it was following his loss to Rory MacDonald at UFC 133 that gave Pyle the push to put his faith in Pettit, which recently paid off.

“After the loss, I think things seemed to get a little redundant doing the same thing over and over with the same ideas,” remembers Pyle. “I felt like there was something missing in that last camp before I fought MacDonald and especially after; it got me thinking about the things that I was searching for. I found it in Nate Pettit. I made that change not just because of the loss to MacDonald - that kid's a stud and it wasn't a fault to any coaching or anything. That was totally my fault and he was better man that night. But that was a big eye opener for me to bring in new people and change things up in training. I had seen Nate coming into the gym and working with Nik Fekete. I would see some of the things he was doing like holding mitts, and how he had Nik do certain things and I liked the way it looked. It looked like they were good ideas. I talked with Nik and asked him what his opinion of Nate was and picked his brain about it. He had good things to say, plus from what I was seeing I was interested. So, I went up to him and said, 'hey, do you want to be my coach?' That was it. We fell in love and here we are today (laughs).”

MMA is a one-on-one sport when it’s all said and done inside the cage come fight night, but it takes a group of people to prepare a single fighter. As much as it is all up to that one fighter to handle the weight and burden of fighting, it takes numerous coaches, training partners, teammates, nutritionists, and a small army to provide the insight to achieve one’s physical peak and sometimes the extra motivation to step inside the Octagon. Pyle explains how he finds his happy medium of being a part of a team while competing in an individual sport and what the benefits are by using one of his favorite hobbies as a metaphor.

“You can feed off each other’s intensity and feed off each other in many ways,” says Pyle. “It's good to talk to each other about how your training is going and how you're feeling if you're run down and what they're doing if they feel run down. It's good to talk to each other about that. I do like my own time and my own coaching staff. It's like going fishing with your buddies. Yeah, it's good to go fishing with your buddies and talk about fishing, but it's also nice to move on down the river by yourself and work on the things that you can practice by yourself and see if it works and be in your own little world. I like the atmosphere. Kampmann has a big fight coming up (last Friday’s win over Jake Ellenberger) and I'll be there helping him and cornering him for that as well. That's going to pump me up for next week as well. Anytime I go to a UFC fight and it's close to a fight, even if it's a month away, that amps me up. Now, I'm going and it's only a week away, so I'm going to be extra pumped and that will fuel the fire.”

This Friday in Sunrise, Florida, Pyle looks to loosen a few teeth of “The Dentist” in a welterweight slobberknocker. “I'm expecting an all-out, drag-out, knock out war between he and I,” declares Pyle, who wants to ride the wave of momentum from his exciting TKO in January and the hiring of a new coach, Pettit, into this showdown with Neer. “He likes to get in your face, dirty box, land elbows, and he's looking to try and get a hold of you and so am I. I think those two traits of ours are going to come together just great and it's going to make an exciting fight. When it's said and done after that fight, the fans are really going to notice that I'm a complete fighter, I'm dangerous, and I can put on a good show.”

Seeing as Xtreme Couture MMA’s namesake debuted in the UFC at about 34 and fought until he was 47, “Quicksand” at 36 is practically a kid in this sport with a bright future ahead of him.