At 33, Duane Ludwig is Just Warming Up

"I think I'm better at wrestling and jiu-jitsu than him, but when that bell rings and I get hit, I bite the end of my mouthpiece and I chuck bombs." - Duane Ludwig 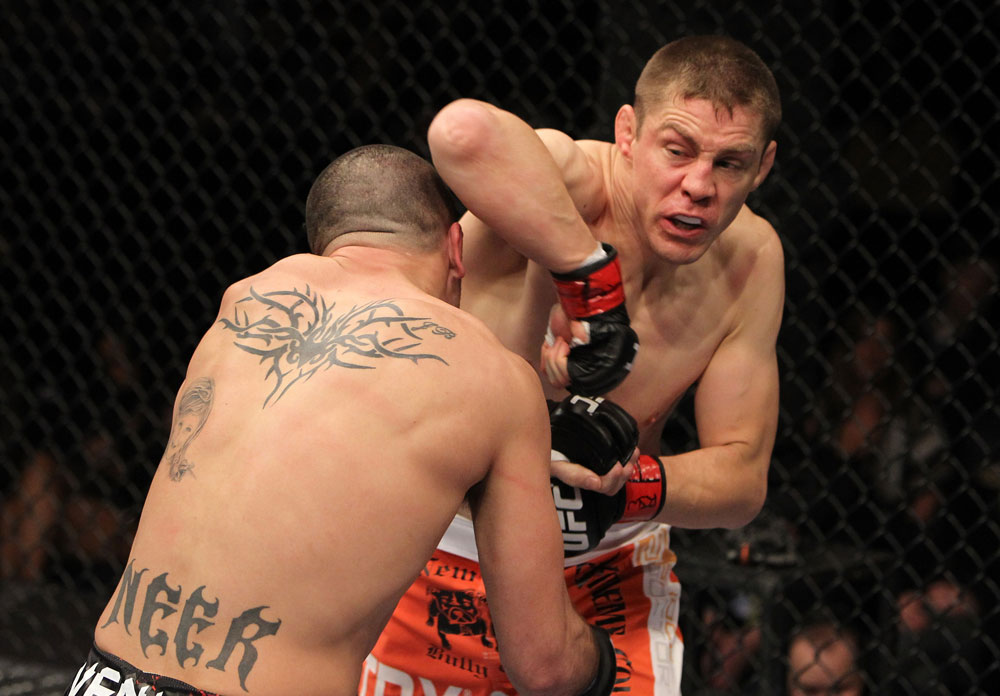 Duane “Bang” Ludwig is just like you, with one exception: he’s a world renowned kickboxer and mixed martial artist.

The Denver, Colorado native is a husband, a father, a small business owner (303 Training Center in Westminster, CO), and simply a guy who wants to own a house. On the other hand, he is also the proud owner of the fastest knockout in UFC history, but that title nor the litany of Muay Thai belts that he refers to as “closet stuffers” have not altered the down-to-Earth individual he is outside of the cage, regardless of how popular he is in it.

“I still have a mortgage and car payments,” tells Ludwig. “I still live fight to fight. It's not like I'm anything different. People who get popular in the UFC and change when they get famous, I'm not famous, but there are people who change when they get more popular, per se. Maybe it's because they're a fake person and they're allowing other people’s vision to change them. Maybe I would change if I was given a million dollars, but I would doubt it. I am the same person I have always been. I sell more shirts, I sell more shorts, I have more students at the gym, I get more interview questions, and I guess it's just a busier lifestyle than what it's been. But it's fun. Being more popular, I'm able to connect with more people and help out a lot more people, which is nice. I like to help out people and help out animals. It's not about collecting more dollars and being the ‘man’. It's about connecting with more people and spreading the martial arts knowledge and I'm happy the more I can do that.”

The 33-year old Ludwig has spent over half his life in pursuit of martial arts excellence. At 15, he began training Muay Thai as his passion, with expectations of being an electrician as his job. After tearing through the amateur circuit, Ludwig became a professional kickboxer and cagefighter in 2000 and hasn’t looked back ever since. 12 years later, he has traded fists and feet around the world with the best fighters both sports have to offer, is raising a family, aspires to open an animal rescue, and is having a blast competing with the razor sharp talent of the UFC welterweight division.

“My motivation has always been that I'm a natural fighter, I love to fight, and I love to train,” says Ludwig. “Things have changed now because I know my athletic performances in the cage directly affect my financial responsibilities, so that is a pressure that sometimes has hurt me and sometimes has helped me. But I try not to let that distract me. At the gym, I still have to train to get better and go out there and fight and have fun. It's about exploring yourself and the self-development of who you are and your dream. There's a win bonus and I have a family and that's all a reality, but, at the end of the day, I have to go out there and have fun. I'm a husband and father first before I'm a fighter, but I definitely love to fight and it's fun for me. I'd rather help somebody than punch somebody, but I don't mind punching somebody either.”

The last person fight fans saw “Bang” sock in the kisser was the granite chinned Josh “The Dentist” Neer in the co-main event at UFC on FX in January. “I definitely felt good and definitely felt that I was getting the better of everything because I was,” remembers Ludwig, who landed shots at will before Neer scored a takedown and, shortly thereafter, a guillotine choke. Neer caught Ludwig’s exposed neck in the fight ending submission as he was pushing his way back to standing. “He got the takedown too easy. Looking back, I wish I had sat back and waited for the referee to separate us. I was too eager to fight; I'm too impatient when I fight.”

The first round loss is Ludwig’s first at 170 pounds in the UFC following two exciting decision wins over The Ultimate Fighter alum Nick Osipczak and season 7 winner Amir Sadollah. With an overall record of 29-12, “Bang” has appeared physically at his best in these past three performances, looking faster, stronger, and more dangerous than he has in years. “It's definitely great focusing on training to be a martial artist and not just cutting weight,” says Ludwig, who walks around at 190 pounds and used to stubbornly cut down to 155 pounds for lightweight.

On Memorial Day weekend at UFC 146, the next challenger for Ludwig is a showdown with British slugger Dan “The Outlaw” Hardy, which has the proverbial “guaranteed fireworks” written all over it. “He's a really good opponent and always comes to fight,” asserts Ludwig, who isn’t underestimating the heavy-handed Hardy because of his recent four fight losing streak. “The whole win/loss ratio is idiotic as long as you come to fight, case in point with Dan Hardy. They want you to put on a good show and that's what he comes to do and that's what I always come to do. Of course, everyone wants a winner, but you want good shows and we put on good shows.”

On paper, this is a matchup between standup fighters with a prodigious amount of KO/TKO victories to their name. Although true, that rough estimation severely undercuts Ludwig’s elite level kickboxing experience, which he has honed, as mentioned, for more than half his life. “Bang” didn’t win the I.S.K.A. World Title from Mongkhon Wiwasuk because he likes to grip and rip punches; Ludwig won because he’s a great and technical kickboxer. It’s a distinction that was quite evident in Ludwig’s outclassing of Sadollah last August, and he anticipates a similar result against Hardy if the fight stays on the feet.

“I'm a striker,” affirms Ludwig. “I'm one of the best strikers in all of MMA. I'm a very good striker in the striking world. I did K-1. I think overall if you matched me against not just mixed martial arts strikers, strikers in general, I would grade myself as a B+, A- of the best. That's against the best like K-1 Max level guys. Anything can happen and I am a mixed martial artist and not just a striker. If it goes to the ground, I will be prepared. I do a lot of wrestling, a lot of jiu-jitsu. It's in my blood to stand up and fight, so I prefer that. We'll see what happens when the bell rings. I feel superior to most guys in striking, but Dan can take a shot and he can chuck some bombs, so I have to be alert and be on my game for sure. I'm just naturally fast and I hit hard. I've been doing this for a while, so you can see what's going on before, during, and after shots to see if there are any openings going on in there. I am good at reading telegraphic keys is what I call them - I have good ‘counter eyes’. There are mistakes done before, after, and during shots and I can pick them up. I felt that in the Sadollah fight and I think I will feel that again in the Hardy fight.”

In preparation for his bout with his 23-10 (1 NC) opponent, Ludwig splits his training between two gyms: his own and Grudge Training Center. At the latter, “Bang” works with gym owner, operator, and boxing coach turned MMA coach Trevor Wittman while sharing mat time with MMA notables like Nate Marquardt and Brendan Schaub. At his own gym, Ludwig brings in Brazilian jiu-jitsu black belts, solid wrestlers, and has the personnel who can help keep his striking tight. No matter where he trains, Ludwig has himself, who he’s relied on most to cull his own talent by his own instincts as a fighter.

“I have to give myself the most credit in being able to just see these things,” explains Ludwig. “It's just naturally been in me and been a part of me of being able to see shots, shots coming. I do have specific drills that I do to kind of slow things down visually and read the telegraphic keys. I would say 80% of this has been self taught from watching videos and doing what I feel like I should do. I have learned quite a bit from Trevor Wittman and I have learned quite a bit from Bas Rutten. I have been able to pick things up and pick and choose things and that's how my fight game has evolved. I have adapted my own style or created my own style from that, so that's been good instead of having someone tell me what I should or shouldn't do. I just go by feeling and who I truly am instead of having someone tell me what I am. I go by what I feel, which is more natural.”

On May 26th in the MGM Grand Garden Arena, two MMA welterweights will collide inside the Octagon, but everyone watching will have their fingers crossed that “Bang” and “The Outlaw” keep it standing and just throw. “I think I'm better at wrestling and jiu-jitsu than him, but when that bell rings and I get hit, I bite the end of my mouthpiece and I chuck bombs - that's just what I do,” states Ludwig, who remains true to himself as a fighter in the cage or ring, and as a nice guy outside of it.

In conclusion, “Bang” is a typical family man trying to make ends meet seeing the shots coming and firing back with a mean counterpunch. Sort of like all of us.