2021 Is Mike Davis' Chance To Make Up Lost Ground

Mike Davis enters 2021 with hopes to make up for 2020, a year in which he was hit by car while riding a bike, suffered multiple injuries and had multiple fight cancellations.
By Thomas Gerbasi, on Twitter: @TGerbasi • Jan. 19, 2021

Most would agree that 2020 was a pretty lousy year. What would Mike Davis say?

That appears to be the consensus, but Davis makes it clear that he really means it when he makes a statement like that.

“Do you want details?” he asks.

Of course. And what followed was a 12-month run that takes “worst year ever” to new heights.

“We'll start from the beginning,” said Davis, who makes his first start since a spectacular knockout of Thomas Gifford in October 2019 when he faces unbeaten Mason Jones on Wednesday. “January, I broke my ribs when I was supposed to fight in February, and I had to back out of that fight.”

The February bout against Giga Chikadze had fireworks written all over it, but the injury kept Davis from making the date. When he was healed up in March, he went back to the gym, but the COVID-19 pandemic shut everything down, leaving him without a place to train until the middle of April.

“I get back to training and I get offered that same fight at the end of April, two weeks' notice, so I take it,” Davis said of the rescheduled Chikadze bout, now set for May 16. Without being able to work in the gym consistently, Davis had some work to do to get down to the featherweight limit of 145 pounds. 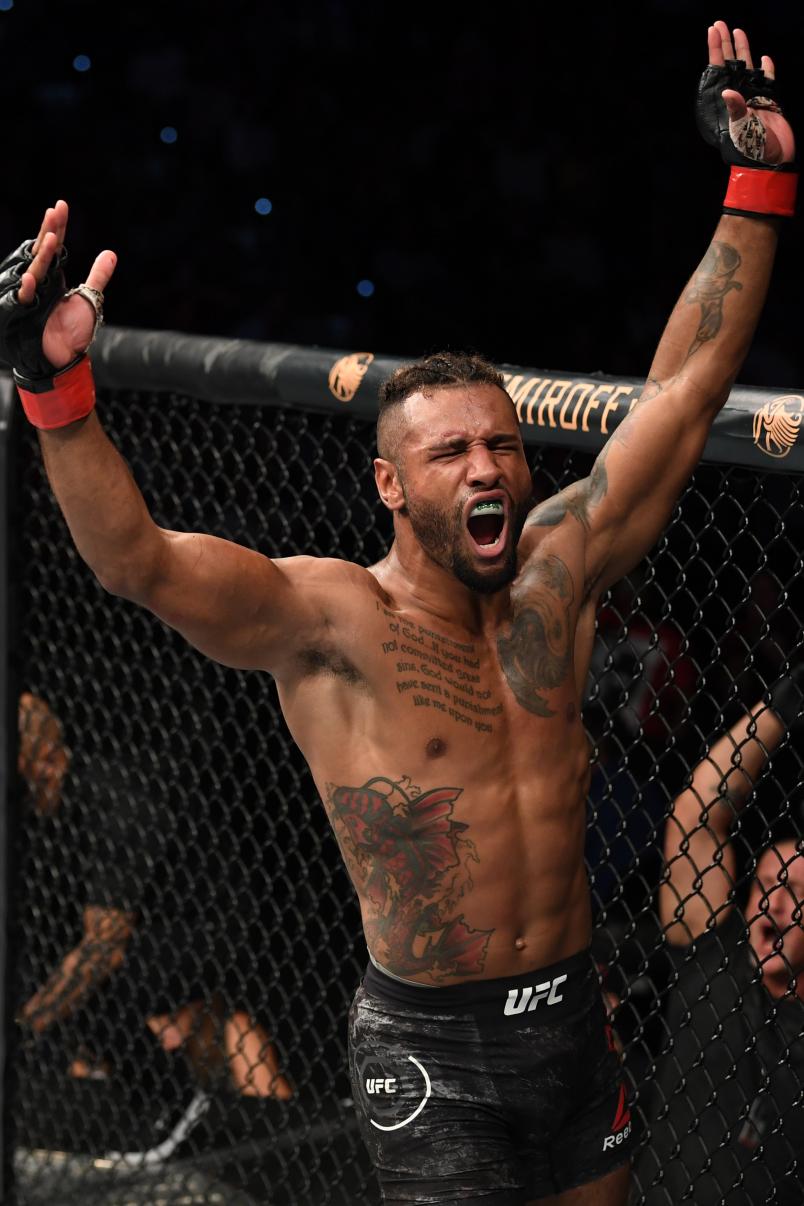 Mike Davis celebrates his KO victory over Thomas Gifford in their lightweight bout during the UFC Fight Night event at Amalie Arena on October 12, 2019 in Tampa, Florida. (Photo by Josh Hedges/Zuffa LLC)

“I say I'll just run every day to get the weight off; that didn't work because I ended up with an infection in my face and it was drying out my body. I couldn't maintain any water whatsoever. No matter how much water I drank, I was always dehydrated. The doctors came up to the room while I was cutting weight and said I was physically unable to cut anymore.”

The bout with Chikadze was scrapped a second time. Then came June.

This is the worst year ever and there are still five months to go.

“The worst,” he chuckles. “But there's some more.”

“I got a bunch of fractures on the left side of my body. It was kind of a hit and run. He stopped, was like, you okay, and I was so mad that I was throwing my bike off the side of the road and I guess me moving around stated that I was fine, so he left. My shoulder's really jacked up, so all of August I'm just running. I run all of August and tear my meniscus. Torn meniscus, my shoulder's healed up and now I'm using my arms a lot. I'm hitting the bags, doing boxing a lot and I do some damage and get a mini-tear in my labrum.” 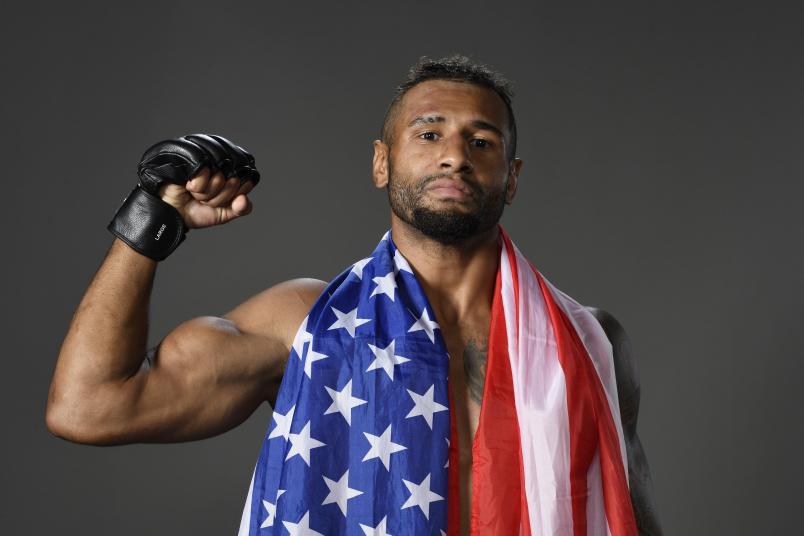 Mike Davis poses for a portrait backstage during the UFC Fight Night event at Amalie Arena on October 12, 2019 in Tampa, Florida. (Photo by Mike Roach/Zuffa LLC)

Around this time, most would have given up on fighting and considered getting an office job somewhere.

“Pretty much,” said Davis, who finally healed up and told the UFC that he wanted a fight. He got one in Welsh phenom Jones, a two-division Cage Warriors champ making his UFC debut.

“They give me that Mason Jones kid and I said, I don't care, let's go.”

And here we are. Actually, there’s one more kick to 2020 for Davis, who went back to his home state of New York for the holidays, hoping to see some snow.

“They had a blizzard on Tuesday, but then all of a sudden the weather got really warm and melted all the snow.”

At this point, he has to laugh.

At least he made it through, and now he’s got a fight with a lot of eyeballs on it and the chance to secure his first winning streak as a UFC fighter with a victory in Abu Dhabi.

“I'm looking forward to 2021 starting off really nice,” the 28-year-old said. “I get a fight, I get to travel to a place I've never been, it's all-inclusive, so it's really, really nice. And I'm very thankful for the opportunity to go against a game opponent like Mason Jones. It's pretty cool.” 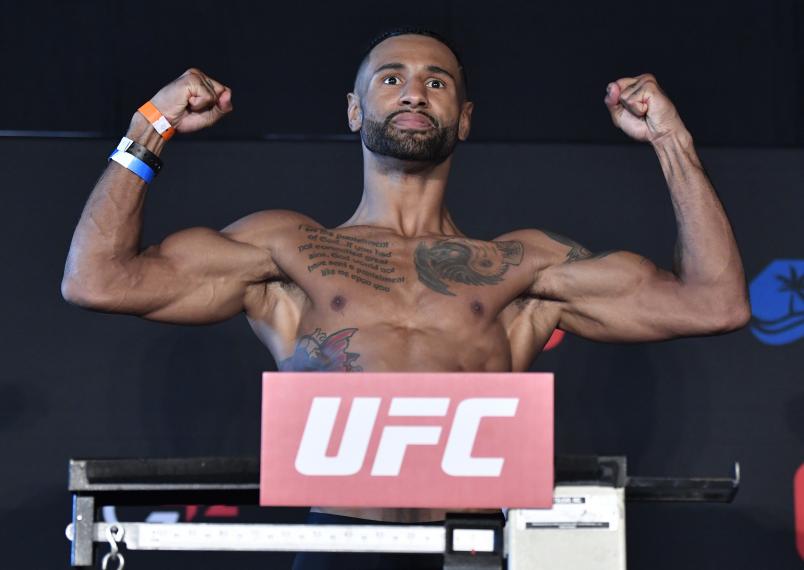 Mike Davis poses on the scale during the UFC weigh-in at Etihad Arena on UFC Fight Island on January 19, 2021 in Abu Dhabi, United Arab Emirates. (Photo by Jeff Bottari/Zuffa LLC)

That’s not an attitude most would have, but kudos to Davis for looking at the positives of the last 12 months.

“I just believe that everything happens for a reason,” he said. “I know that's said a lot, but throughout my life, I've been tested, and I thought of 2020 as the ultimate test of my life. I'm thinking that if I can make it through 2020, then I believe that I'm ready for the next step of life. I'm ready to keep going.”

“Three or four fights, a few travel trips, and my name growing so I can start to use my name to develop and help people the way I want to,” he said. “I want this year to be a growth year. I want people to start recognizing who I am.”

Watch UFC Fight Night at a special time This Wednesday: Prelims begin at 9am ET, Main Card at 12pm ET