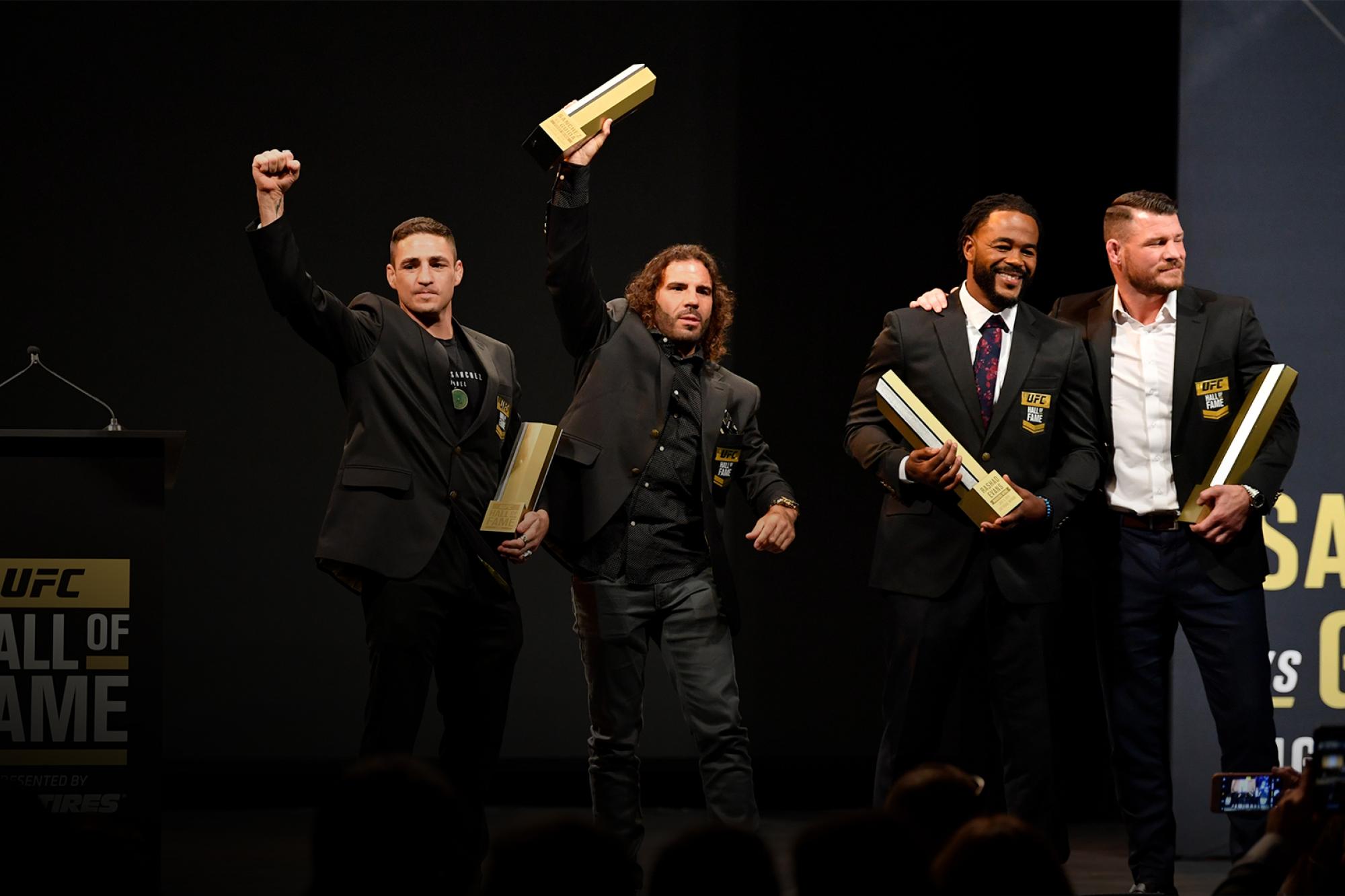 UFC legends were inducted into the Hall of Fame Friday night
By E. Spencer Kyte • Jul. 6, 2019

The UFC Hall of Fame Induction Ceremony has become a staple of International Fight Week, and Friday night in Las Vegas, the company added another fight and three more competitors into the exclusive assemblage of athletes, contributors and compelling bouts that have already been enshrined.

Hosted by Jon Anik, the night began with the June 20, 2009 fight between lightweights Diego Sanchez and Clay Guida becoming the fifth bout added to the Hall of Fame.

The bout, which headlined the Ultimate Fighter: United States vs. United Kingdom Finale, was Sanchez’ second bout since moving to the lightweight division and came on the heels of his Fight of the Night-winning effort against Joe Stevenson four months earlier. While the “Nightmare” was new to the division, Guida was already a staple, entering the bout on a three-fight winning streak, including having toppled recent TUF winner Mac Danzig and edged out Nathan Diaz at the start of the year.

Given their respective reputations for putting on exciting fights, the expectations were that this one would closely resemble the rolling balls of dust with limbs sporadically popping out in random directions that signified a scuffle in old Looney Tunes cartoons and Sanchez and Guida still managed to exceed expectations.

The opening five minutes was arguably the most frenetic five minutes in UFC history and they never let off the gas except to walk to their corners between rounds. As soon as they were back up and the next frame began, they were right back to redlining offense, covering every square inch of the Octagon; no quarter given and none asked.

Sanchez came away with a split decision victory and went on to challenge for the lightweight title next, while Guida dropped a bout to Kenny Florian before putting together the best winning streak of his career. In addition to winning Fight of the Night, the contest took home Fight of the Year honors as well.

A decade later, both Guida and Sanchez are still plying their trade inside the Octagon, with the former earning the 35th win of his career two months ago and poised to face Jim Miller next month, while Sanchez is set to step into the cage on Saturday night at UFC 239 against Michael Chiesa.

“We were about to go takedowns back there, but he’s got a fight tomorrow night,” Guida said of he and Sanchez when he took to the stage.

The perennial fan favorite entertained as only he could, thanking his family — his parents, his sister, and his brother, all of whom were in attendance — before paying tribute to the coaches and training partners that have helped shape his career, mixing in the kind of quirky anecdotes only Guida could deliver.

“I’ll leave you guys with this,” he began, “even though Diego got his hand raised that night, the fans were the true winners that night.”

Despite fighting tomorrow evening, Sanchez made an appearance on stage as well.

“I’m going to keep it short and sweet,” he started, detailing that the speech was planned and programmed into the teleprompter, adding that he wanted to keep his mind focused on beating Michael Chiesa on Saturday night.

“How ‘bout that first round, you guys?” he asked the crowd to a round of applause. “Of all the fights I’ve competed in and watched in the UFC, that has to be the best round I’ve ever been a part of.

“Ten years later, people still tell me that’s the fight that got them into UFC,” he added, before promising to bring the same energy against Chiesa.

The first fighter enshrined on Friday night was former middleweight champion Rich “Ace” Franklin, who was one of the unsung cornerstones of the promotion as UFC erupted in popularity in the wake of The Ultimate Fighter and was inducted into the Pioneers Wing.

Many people don’t remember this, but Franklin actually headlined that first TUF Finale, stepping into the Octagon and defeating Ken Shamrock by first round stoppage right after Forrest Griffin and Stephan Bonnar changed the company’s trajectory forever. That bout catapulted Franklin into a middleweight title fight two months later, with the former math teacher from Cincinnati capturing the belt with a fourth-round stoppage win.

After successfully defending the title against Nate Quarry and David Loiseau in a pair of memorable contests, Franklin lost the belt to Anderson Silva at UFC 64 and came up short in his bid to reclaim the title in a rematch one year later. He would spend the remainder of his bouncing between divisions and different international assignments, facing whatever big name the UFC sent in his direction, including Dan Henderson, Wanderlei Silva (twice), Vitor Belfort and Chuck Liddell.

“I never pictured myself being here,” Franklin said in a taped speech played during the broadcast, taking the same tact as Guida and thanking everyone who helped him accomplish his childhood dream of being a professional athlete and becoming a Hall of Famer.

“Without all these people in my life that have had some sort of impact on my career, (this) wouldn’t have happened without them and winning a Hall of Fame induction is truly the culmination of all the work that everybody else put into me for my career.

“Thank you everybody for all your support,” he added. “Thank you to all the fans who kept pushing for the Hall of Fame induction even after my retirement. I appreciate it so much.”

In addition to winning the middleweight title with his UFC 53 win over Tanner, Franklin earned a coaching gig on Season 2 of The Ultimate Fighter, where a confident wrestler from Niagara Falls, New York named Rashad Evans became the coach’s fifth selection. Friday night, he went into the Modern Wing of the UFC Hall of Fame.

Evans, a natural light heavyweight who entered the competition with an unbeaten record, moved up to compete at heavyweight on the show, trading size for speed and using his collegiate wrestling pedigree to grind out victories. After earning a split decision win over Brad Imes to join the fraternity of Ultimate Fighter winners, “Suga” returned to the 205-pound ranks and rattled off four straight victories, including his highlight reel head kick finish of Sean Salmon.

A draw with Tito Ortiz and a split decision win over Michael Bisping set up a bout with former champ Chuck Liddell, where Evans connected with a swift right hand over the top that knocked “The Iceman” out cold and elevated Evans to superstar status.

He won the light heavyweight title in his next bout, stopping TUF 1 winner Forrest Griffin in the third round, only to drop the belt to Lyoto Machida in his first title defense, but the loss did nothing to diminish his star status. Heated rivalries with Quinton “Rampage” Jackson and Jon Jones dominated the headlines and Evans remained a fixture in the title picture until a series of knee injuries put him on the sidelines for nearly two full years.

Evans transitioned into broadcasting even before his career in the cage ended, serving as one of the main analysts for the UFC on FOX broadcasts, a role he continues today on ESPN.

“To be recognized by the UFC is a blessing beyond words,” said Evans, who was introduced by his long-time coach and close friend Trevor Wittman.

A few moments into his speech, the auditorium started shaking, pausing his speech momentarily as Las Vegas was hit with the ripple effects of the 7.1 magnitude earthquake that hit Ridgecrest, California on Friday evening.

After picking back up and detailing his journey from a rambunctious kid in Niagara Falls who eventually fell in love with wrestling and then fighting, Evans relayed the story Wittman told earlier of his interview to get on Season 2 of The Ultimate Fighter and trying to convince Dana White to allow him to compete at heavyweight.

The entertaining Evans delivered a speech laced with impressions of family members and former coaches, acknowledging the different individuals who influenced his career, including Mike Van Arsdale, the late Glenn Robinson, and even rivals like Jackson and Jones.

“No matter what I accomplished, whether it was on The Ultimate Fighter or winning the title, I wanted to bring people with me. I was able to come to South Florida and create a whole team, a whole franchise and I was able to touch so many athletes and careers in a positive way and that’s what matters to me most.”

Wrapping up, Evans explained that he got into fighting as a man filled with issues that he looked to address and release the demons inside of him.

The final inductee of the evening was Michael Bisping, who followed Evans in the roll call of Ultimate Fighter winners, claiming the light heavyweight competition on Season 3 before embarking on one of the most storied careers in UFC history.

The brash, polarizing fighter from Clitheroe had a way of turning every bout into a blood feud and getting under peoples’ skin, both opponents and fans alike. After beginning his career at light heavyweight, Bisping moved down to middleweight following his split decision loss to Evans at UFC 78, the first loss of his career.

What followed was a nine-plus-year run defined by resilience, determination and uncanny levels of self-belief.

Every time Bisping would get close to earning a championship opportunity, he’d run into a roadblock — Dan Henderson, Wanderlei Silva, Chael Sonnen, Vitor Belfort. Following his loss to Luke Rockhold in November 2014, it felt like “The Count” had exhausted his options, but then Bisping rattled off three straight wins, including a come-from-behind victory in London over former champ Anderson Silva that put him back in the mix, and when Chris Weidman was forced out of his championship rematch with Rockhold at UFC 199, Bisping stepped up on two weeks' notice, sure that he was going to shock the world.

And then he did.

A little over three minutes into the first round, he staggered Rockhold with a left hand and swarmed the dazed champion, landing a barrage of follow-up blows that forced the stoppage and immediately changed Bisping from one of the best to never win a UFC title to an unlikely champion who seemingly willed his way to the top.

Like Evans, Bisping transitioned into broadcasting during his fighting days and remains one of the most prominent analysts in the sport today. He’s recently added calling the action in the broadcast booth to his repertoire and as you would expect, the quick-witted Brit is a natural.

Bisping officially retired in May 2018, six months after his final Octagon appearance.

“Don’t cry, you p***k,” Bisping started, acknowledging that he’d been fighting back tears while his coach Jason Parillo and wife Rebecca introduced him. “I know you all want to get to the bar and I want to get there too, so I won’t keep you that long and if you want to buy me a drink, that’d be great.”

After offering a thoughtful thank you to his wife and Parillo, the long-time face of British MMA thanked the loyal fans back home for their enduring support over the years. He added individual recognition of each of his three kids sitting in the audience, his manager, Audie Attar, and the various UFC staff members he’s interacted with over the years before wrapping with a message to his previous opponents and his contemporaries.

“This is a magnificent sport and it’s because of you guys,” he said, addressing the fans. “There are no other fans like mixed martial arts fans in the world. The attention to detail that you have — we wouldn’t be here now if it was for you people.

“To everyone that I fought and everyone fighting tomorrow night, Clay Guida, Diego, Franklin, Rashad — give it up for Rashad — everyone that has the balls to step in there, you have my respect forever.”