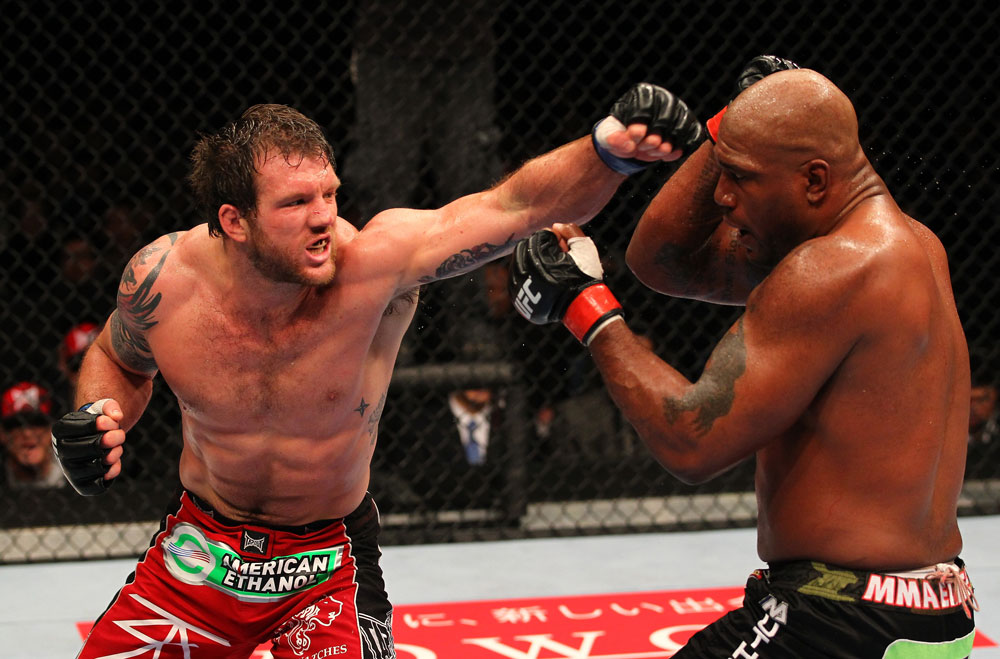 The upset. It can shatter careers and rebuild or create others. In 2012, we’ve seen some quality fighters rise from the ashes to make significant statements at the expense of high-profile names, and on top of the list is a young man who was in a very different place on this list a year ago.

5 – Tim Boetsch stops Yushin Okami
One of the top middleweights on the planet, Yushin Okami certainly looked the part for 10 minutes in his UFC 144 (Watch Event) bout with Tim Boetsch in February. The ultra-tough “Barbarian” took everything the former number one contender threw at him, but the odds of him coming back to win the fight weren’t too hot heading into the third round. But then Boetsch did what many fighters talk about, but few do: he threw all caution to the wind, emptied his clip and went after Okami in a last-ditch effort to turn things around. And remarkably, it worked, as he stopped his opponent less than a minute into the final round. It wasn’t just one of the biggest upsets of the year, but one of the best comebacks ever.

4 – CB Dollaway keeps Mayhem Miller winless in the Octagon
When Jason “Mayhem” Miller returned to the UFC in 2011, he got the push from the organization that marked him as one of the top 185-pounders in the game. But after his stint as a coach on The Ultimate Fighter ended with a dismal defeat at the hands of opposing coach Michael Bisping, his image needed some rehabbing. Enter CB Dollaway, a former TUF finalist who fell on some hard times, losing back-to-back fights via knockout to Mark Munoz and Jared Hamman. It should have been the perfect rebound fight for “Mayhem,” and while he did rock “The Doberman” a few times in their UFC 146 (Watch Event) bout, it was Dollaway who controlled things with his wrestling the rest of the way, sailing to a three round unanimous decision victory that put Miller’s fighting future in question.

3 – Ricardo Lamas bullies Hatsu Hioki
Ricardo Lamas is not a talker. And in this sport, or any sport for that matter, when you’re not a talker you could get overlooked. That was the case when he entered his June bout with Japan’s Hatsu Hioki, an elite featherweight contender who could have had a shot at champion Jose Aldo, but instead opted to build his Octagon resume a little more. That turned out to be a tactical error, as Lamas lived up to his nickname “The Bully” and roughed up the game, but overpowered, Hioki for three rounds en route to a three round unanimous decision win (Watch Event) that shook up an already shook up 145-pound weight class.

2 – Jamie Varner’s triumphant return at the expense of Edson Barboza
Jamie Varner will probably be the first to admit that when he wore the WEC lightweight championship belt, he was a bit of a polarizing figure among fight fans. But after experiencing some tough times that included not coming over to the UFC when the promotion and the WEC merged, he became more real and more human to a public that always roots for a good comeback story. But practically no one expected that comeback story to include a first round TKO of unbeaten rising star Edson Barboza (Watch Event), who was coming off the Knockout of the Year over Terry Etim. But Varner pulled it off in his first UFC bout since 2007, and this time, he plans on staying a while.

1 – Ryan Bader’s redemptive win over “Rampage” Jackson
In July of 2011, Ryan Bader’s fight career hit its low point. Sure, he had lost his first pro fight against Jon Jones five months earlier, but that was Jon Jones, soon to be the light heavyweight champion of the world. Losing to Tito Ortiz was unacceptable though. Yes, Ortiz was a former light heavyweight champ and future Hall of Famer, but at this point in his career, he had not won a fight since 2006 and his body had betrayed him more than once in the ensuing years. So when the highly-regarded prospect got submitted by Ortiz, it could have been a career-killer for Bader. But the Arizonan is made of sturdier stuff than that, and after he bounced back with a 77 knockout of Jason Brilz at UFC 139, he was matched with another former light heavyweight champ, Quinton “Rampage” Jackson, at UFC 144 (Watch Event) in February. The bout was supposed to be a triumphant return to Japan for Jackson, a former PRIDE star, but Bader wasn’t having it, not this time. He was not going to be on someone else’s highlight reel, and while he didn’t finish Jackson, when the 15 minute bout concluded, there was no doubt who the winner was. Ryan Bader was back.