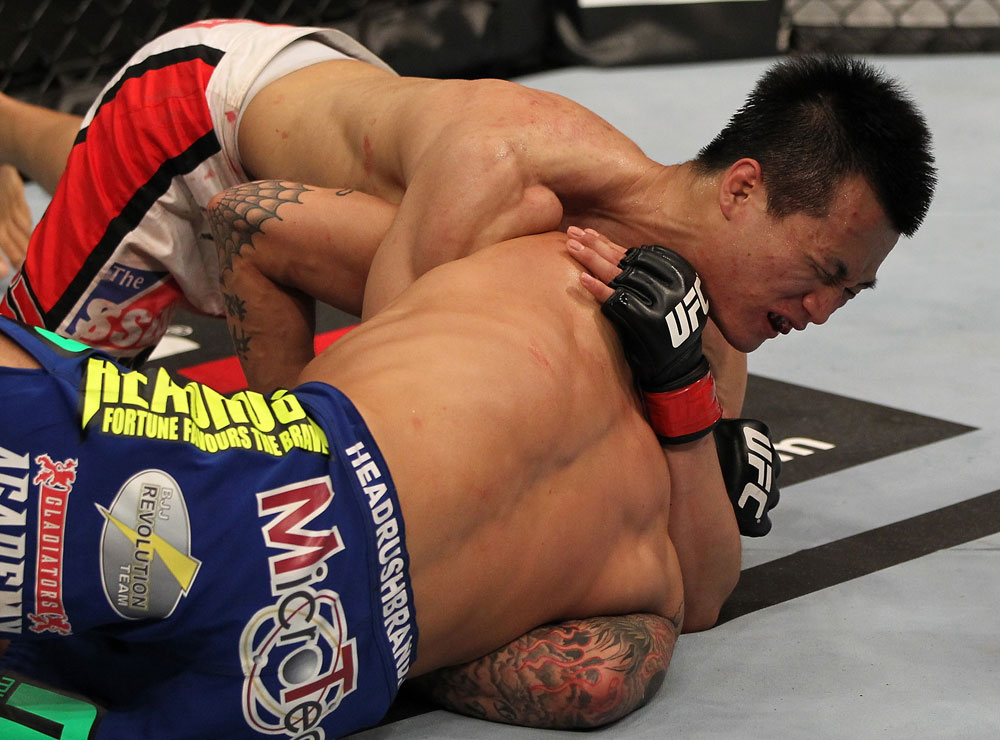 For the most part, trying to determine the best submissions of the first half of 2012 comes down to individual preferences. Do you like technical wizardry, pulling off a move with a high degree of difficulty, tapping out a highly-regarded foe, or just finishing a fight in dramatic fashion? Well, hopefully we covered all bases here, and if your favorite isn’t here, six months from now that may change when the list goes from five to ten.

5 – Rousimar Palhares-Mike Massenzio
All you really need to know about Rousimar Palhares’ submission game is the look of panic on the face of his opponents when he gets his hands on a leg. Like the old Green Bay Packers’ sweep, you know it’s coming, but it’s executed so well that you can’t stop it. And despite his May loss to Alan Belcher, a look back to his January win at UFC 142 (watch sub) (watch fight) over Mike Massenzio shows that when Palhares catches you, you’re not going anywhere. Add in the fact that Massenzio is a jiu-jitsu black belt, and it makes his submission win via heel hook even more impressive.

4 – Charles Oliveira-Eric Wisely
When I spoke to Eric Wisely after his January loss to Charles Oliveira, he said of the aftermath of the calf slicer submission that finished the bout, “Now that I think about it, I don’t even remember it hurting.” It sure looked like it hurt during the fight though, to the point where you cringed and begged for Wisely to tap out. He eventually did, and in the process, Oliveira pulled off the first calf slicer submission win in UFC history at UFC on FOX in Chicago (watch fight). Last year it was Chan Sung Jung’s Twister, and now it’s Oliveira’s calf slicer, showing that the sport still holds some surprises.

3 – Nate Diaz-Jim Miller
Nate and Nick Diaz have received plenty of attention for their standup games, but at heart, both are devoted jiu-jitsu players. Awarded his black belt from Cesar Gracie in April, Nate spoke of the role of the gentle art in his fight game before his May fight with Jim Miller: “Jiu-Jitsu’s a big part of my game, and it’s a big part of everybody’s game because if you don’t know it, you’re gonna sink in this,” said Diaz. “You’ve got to cover every angle as much as you can, so it’s definitely a big part. I do jiu-jitsu every day and as soon as the fight gets a little closer, I don’t put on my gi as much, but as soon as the fight’s over, I’m usually right back in my gi. I gotta learn the best I can and be the best martial artist I can be.” In the main event of UFC on FOX 3, Diaz proved his worth on the mat by tapping out fellow black belt Miller with a guillotine choke in the second round (watch event). Jiu-Jitsu a big part of his game? Oh yeah.

2 – Martin Kampmann-Thiago Alves
One of the welterweight division’s longtime stalwarts, Martin Kampmann hasn’t had the best of luck when it came to the judges’ scorecards. In March, “The Hitman” was on his way to another disappointing decision defeat against Thiago Alves when he took matters into his own hands, pouring it on and finally catching the Brazilian bomber in a fight ending guillotine choke that finished the bout with just 48 seconds left in the bout. Now that’s taking it out of the judges’ hands (watch event).

1 – Chan Sung Jung-Dustin Poirier
This time last year, we were celebrating Chan Sung Jung for his Twister submission win against Leonard Garcia. This year, “The Korean Zombie” didn’t finish off an opponent in historic fashion, but the excitement level was just as high, if not higher, as he and Dustin Poirier waged war for over three rounds in their May bout (watch event). But just when it looked like Poirier had turned the tables on the fast-starting Jung, the South Korean roared back, and caught the Louisiana native in a fight ending D’arce choke 1:07 into the fourth round. It was a spectacular ending to a spectacular fight.