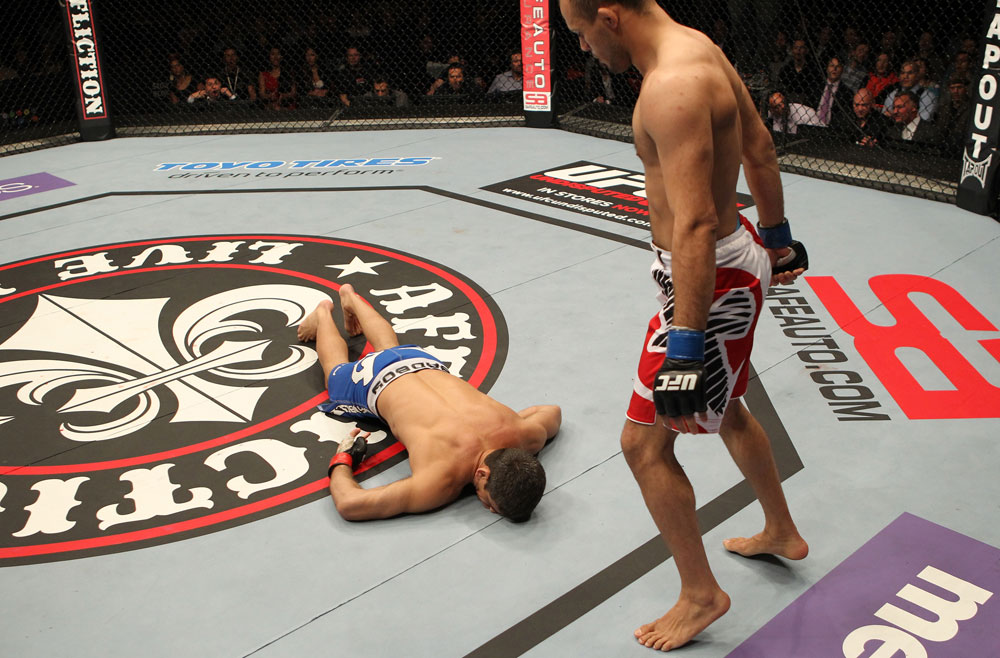 2011’s Newcomer of the Year, Chris Weidman, is coming off a devastating KO win over Mark Munoz. 2010 winner Phil Davis headlined a UFC on FOX event earlier this year against Rashad Evans. What’s in store for this year’s winner? Well, so far, things are certainly looking bright…

5 (tie) – Andrew Craig
Texas’ Andrew Craig entered the UFC in March with an unbeaten record but little fanfare. That changed immediately when he upset home country favorite Kyle Noke (Watch Fight) in Australia. For an encore, Craig battled Rafael Natal at UFC on FUEL TV 4 (Watch Event) in San Jose on Wednesday, and after getting cut, rocked, and nearly stopped, he roared back to finish the Brazilian with a flush kick to the head in the second round. This is a resilient and talented fighter who bears watching in the coming months.

5 (tie) – Tim Means
When you’re fighting guys like Spencer Fisher and Luke Caudillo before your fifth fight, you’re one tough hombre, and after years of toil on the local circuit, Tim Means finally got the call to the big show in 2012. His debut win over Bernardo Magalhaes (Watch Fight) in February was workmanlike, yet unspectacular, but he added spectacular to the mix in his June win over Justin Salas (Watch Event), as he needed just 66 seconds to beat his opponent with a potent striking attack that produced several knockdowns before the end came.

4 – Khabib Nurmagomedov
There’s no question that a 16-0 record sure looks nice on the resume, but the question surrounding Russia native Khabib Nurmagomedov was just who that record was built against. Was it against legit competition in Europe, or just a bunch of local fighters overmatched by the talented 23-year old? Well, “The Eagle” certainly soared in his first two UFC bouts this year, as he finished always tough Kamal Shalorus (Watch Fight) in the third round of their January matchup, and then upset longtime lightweight vet Gleison Tibau at UFC 148. Bottom line, Nurmagomedov is proving himself to be the real deal.

3 – Ian McCall
After resurrecting his career as a flyweight, WEC bantamweight vet Ian McCall was tabbed as one of the four contenders to help introduce the 125-pound division to the UFC faithful, and “Uncle Creepy” didn’t disappoint in his two bouts against Demetrious Johnson. Sure, the charismatic Californian hasn’t picked up a UFC win yet, fighting to a draw with “Mighty Mouse” (Watch Event) and then losing a three round decision to him (Watch Event), but his high-energy style and ability to fight anywhere a bout goes portends a bright future in the rest of 2012 and beyond.

2 – Glover Teixeira
For years, fight fans heard of Glover Teixeira. But for just as long, it was almost like he was Sasquatch, a mythical creature that people thought they saw, but really didn’t. The 17-2 record and wins over the likes of Sokoudjou, Marcio Cruz, Marvin Eastman, Ricco Rodriguez, and Matt Horwich didn’t lie though, so after he straightened out some visa issues, he finally got his chance to compete in the UFC in 2012, and in less than two minutes in May he dismantled Kyle Kingsbury (Watch Event) and announced his arrival with a resounding roar. How good is he? His next fight is against none other than former UFC light heavyweight champion Quinton “Rampage” Jackson.

1 – Siyar Bahadurzada
With an amazing back story and the confidence that comes with using “The Great” as a nickname, Afghanistan native Siyar Bahadurzada was matched tough in his UFC debut against welterweight contender Paulo Thiago in April, but it apparently didn’t rattle the 28-year old too much, as he delivered one of the biggest and most shocking knockouts of the year as he finished the Brazilian in just 42 seconds (Watch Event). The win was Bahadurzada’s seventh in a row, and while a July 21st bout with Chris Clements was scratched due to injury, anticipation is high for the return of Siyar The Great later this year.