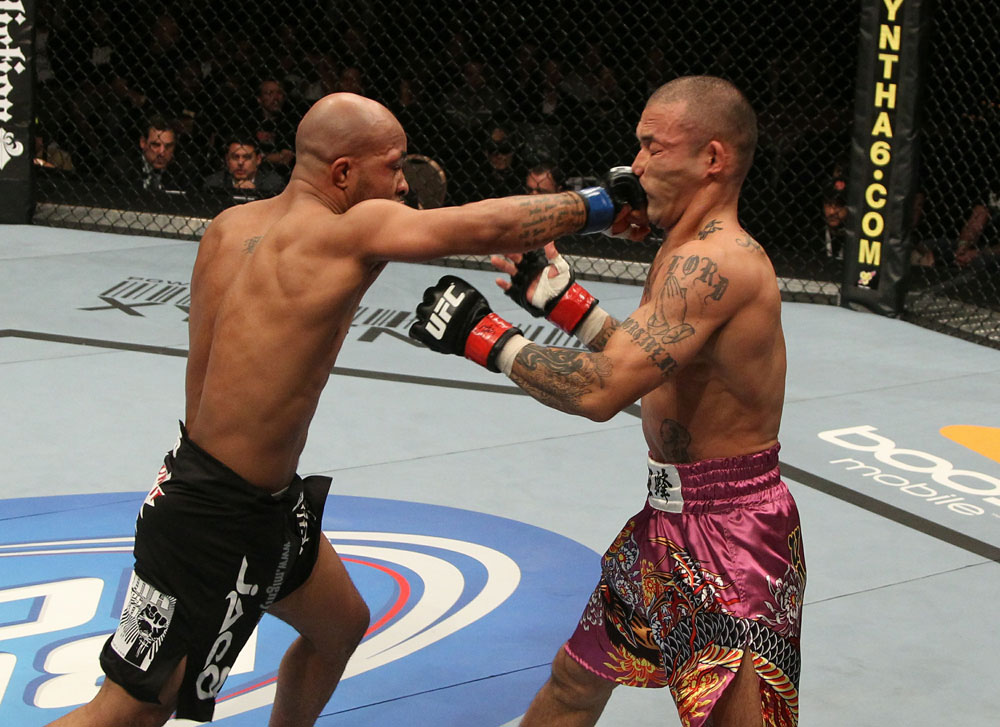 The continuing migration of the WEC’s top guns into the UFC in 2011 has not only added to the excitement level in the Octagon, but it has produced four of the top six newcomers that kick off our first installment of the highly unofficial Half-Year awards season.

5 (tie) – Brian Ebersole
It’s a little odd to call a veteran of 63 pro fights a newcomer, but Brian Ebersole was new to UFC fans when he made his organizational debut in February against Chris Lytle. But by the time the UFC 127 bout was over, his unorthodox, yet entertaining style had made an indelible impression, and after 15 minutes, he had scored an upset victory over “Lights Out” and even earned a Fight of the Night bonus. Plus, at 30, the US native and Australia resident may just be entering his fighting prime, making the future an interesting one for the man with the most creative chest hair in MMA.

5 (tie) – Jose Aldo
Jose Aldo is another example of a fighter who is only a newcomer in technical terms, considering that the UFC featherweight champion was a WEC champion at 145 pounds and a member of the mythical pound-for-pound club. And while he was in his usual stellar form in a hard-fought five round win over Mark Hominick at UFC 129 in April, he only sits at number four here because, like Ebersole, he has only competed once in 2011. In the past, that’s usually been a cause to not be included on the list, but his performance and Ebersole’s were so good that it would be a crime not to give them their props.

4 – Dustin Poirier
Anyone who watched Dustin Poirier’s final WEC fight, a 53 second blitz of Zack Micklewright last November, knew that the Louisiana kid was a certified blue chip prospect. But raise your hand if you thought that he would blow through fellow phenom Josh Grispi at UFC 125 in January. Thought so. But that’s just what he did, scoring a dominant three round decision win in a bout that was as one-sided as you can get without a knockout being scored. In June, “The Diamond” made it two in a row in the Octagon with a decision victory over highly-regarded Brit Jason Young, and while Poirier is still raw, he’s a fighter to watch.

3 – Chris Weidman
Long Island, New York’s Chris Weidman has been saddled with the “Next Big Thing” tag from the time he turned pro in 2009, but even his staunchest supporters had to be a little concerned when he accepted a UFC fight against veteran Alessio Sakara on two weeks’ notice (and with injured ribs) in March. But Weidman proved that the high expectations for him were justified as he scored a clear-cut decision win over “Legionarius” in Louisville. Next up was a June showdown against Jesse Bongfeldt, and he delivered his first UFC finish, submitting the Canadian with six seconds left in the first round. If he keeps this up, he may become the second member of the Serra-Longo fight team to wear UFC gold.

2 – Michael McDonald
Currently the youngest fighter in the UFC, 20-year old Michael McDonald may eventually turn into the best 135-pounder in the organization if he keeps on the track he’s currently on. Another veteran of the WEC, who needed only 2:42 to finish Clint Godfrey in his lone fight there, McDonald debuted in the Octagon in March with a Fight of the Night decision win over Edwin Figueroa that was notable for McDonald’s offensive variety and Figueroa’s resilience after nearly being finished numerous times during the bout. In May, McDonald won his second UFC bout, as he decisioned tough Chris Cariaso, and with his youthful energy, aggressive style, and well-rounded skills, his potential is almost limitless.

1 – Demetrious Johnson
A five-foot-three ball of speed and energy, Demetrious Johnson has may have come out of nowhere in 2011 to defeat world-class bantamweights Kid Yamamoto and Miguel Angel Torres, but considering that he has learned his craft under the wizard, Matt Hume, it’s no surprise that he arrived on the world stage ready to fight. Three WEC fights in which he defeated Damacio Page and Nick Pace and lost a close decision to Brad Pickett prepared him for life under the bright lights, and when he stepped into the Octagon for the first time in February against Yamamoto, he looked like an old pro in pounding out a three round decision win. His victory over former WEC 135-pound boss Torres was a lot closer, but in the end, the 24-year old Johnson, who will only get better in the future, showed that he had the right stuff to battle with anyone in the division.