The Highly Unofficial Half-Year awards continue with the top knockouts of 2011 thus far... 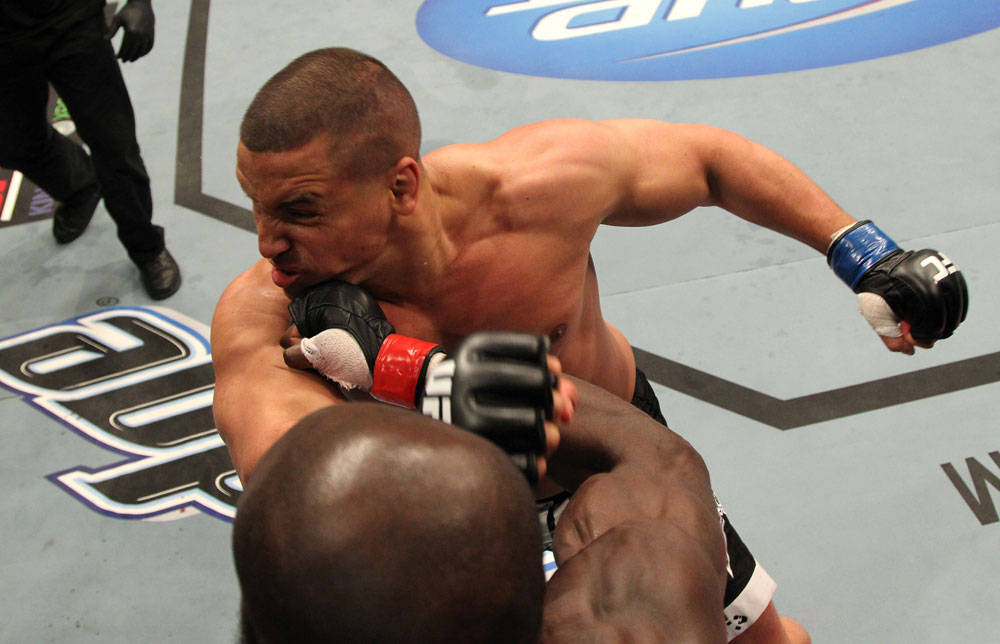 With 40 percent of the top five knockouts of 2011 thus far attributed to his teachings, we may have to rename these the Steven Seagals, but Canada is well represented as well, with their own 40 percent, leaving the last 20 percent of pure power to come straight from Paris, France.

5 – Machida spoils Couture’s final bout
UFC Hall of Famer Randy Couture knew his final mixed martial arts bout wasn’t going to be an easy one in the always hard to decipher Lyoto Machida, but that’s why he took it. No gimmes for “The Natural,” and that’s always been one of the reasons why fans love him. But if former light heavyweight champion Machida continues to finish fights in dynamic style like he did at UFC 129, with a jumping front kick he claimed action film star Steven Seagal showed him, there will be plenty of fans lining up to see the next bout featuring “The Dragon.” WATCH UFC 129 REPLAY

4 – Seagal leads Silva to win over Belfort
By the time Lyoto Machida gave Steven Seagal credit for his finish of Randy Couture, fans began to take such talk from Brazil’s finest seriously, but when UFC middleweight champion Anderson Silva did it for the first time, everyone was shocked. But no matter who taught “The Spider” the front kick to the face that ended Vitor Belfort’s night at UFC 126 in February, the bottom line is that the devastating shot became the strike du jour for athletes throughout the sport, who all hoped to match the surprisingly quick finish turned in by MMA’s pound for pound king. WATCH UFC 126 REPLAY

3 – Makdessi wows home crowd with KO of Watson
In his UFC debut against Pat Audinwood last December, John Makdessi showed a wide array of striking techniques learned during his years an unbeaten kickboxer. His April bout against The Ultimate Fighter alumnus Kyle Watson continued on that same path, but when he saw an opening to be even more spectacular in the third round, he boldly took it, faking a right kick before stepping through and unleashing a spinning left back fist that landed flush on Watson’s face and knocked him out immediately. It’s one of those knockouts that you can replay repeatedly and it just never gets old.
WATCH UFC 129 REPLAY

2 – Stout delivers one punch stunner
When newer fans of the sport look at Yves Edwards, they probably saw a veteran of the sport trying to make another run at glory. And while that was true, hardcore fans remembered Edwards as a man seen as a Top Five or higher lightweight for much of his career, and one who was still dangerous entering his June clash with Sam Stout. So his chilling knockout defeat at the hands of the Canadian wasn’t an easy one to watch, but you have to give it to Ontario’s “Hands of Stone,” who picked up his first KO victory since 2007 in the most emphatic fashion possible, a crushing left hand to the head that ended the bout as soon as it landed. WATCH UFC 131 REPLAY

1 – Kongo scores comeback of the year against Barry
Cheick Kongo vs. Pat Barry. Given all the disappointments in recent years when striker met striker but instead turned it into a wrestling match, expectations were that Kongo would take Barry down in their June bout or that “HD” would even attempt to show off his own growing ground game against the Frenchman. But thankfully, the two decided to live up to their striking reputations, and what followed was a tense trading of thudding leg kicks until all hell broke loose when Barry sent Kongo to the canvas twice, both times appearing to be seconds away from a stoppage victory. But just when all seemed to be lost for Kongo, he got to his feet, planted them, and then ripped off two right hands. The first one stunned Barry, the second put him on his back, and when referee Dan Miragliotta halted the bout, Kongo had just delivered the most spectacular comeback win since Scott Smith finished Pete Sell in 2006. It was a pretty sweet KO for Kongo as well, the best of the year thus far. WATCH UFC LIVE REPLAY