The Highly Unofficial Half-Year awards continue with the top fights of 2011 thus far... 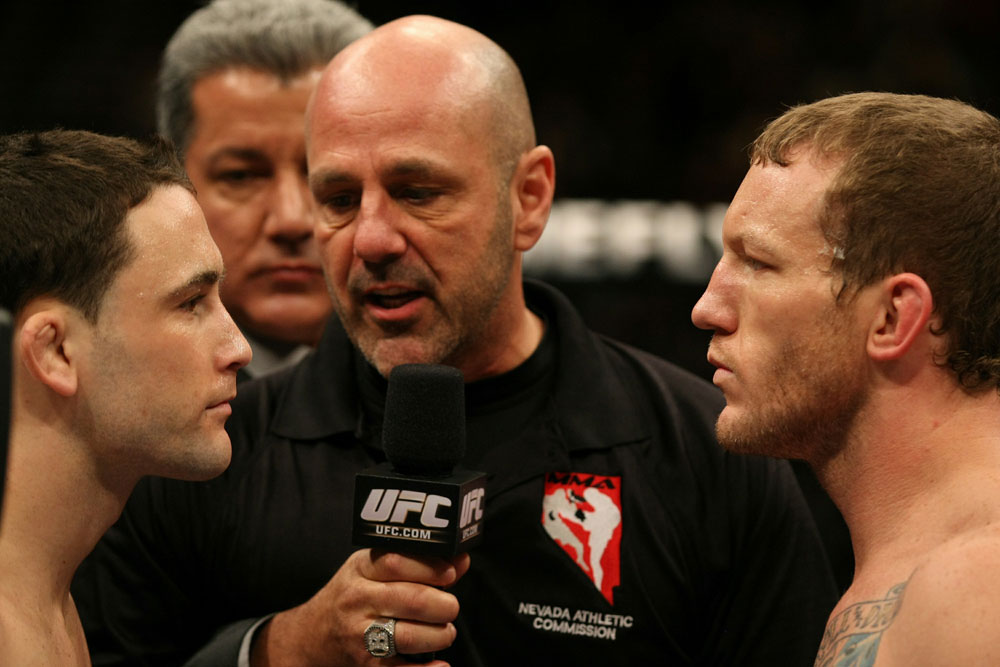 We’ve almost reached the end of the 2011 unofficial half-year awards season, and after counting down the upsets, knockouts, and submissions, it’s time to pick the fights that defined the first half of the year and made you say ‘this is why I’m a mixed martial arts fan.’

5 – Barboza and Njokuani show the brutal beauty of Muay Thai
It says something about Anthony Njokuani’s character that after watching Edson Barboza finish Mike Lullo with leg kicks that he would step up to the plate and offer himself up for the same type of punishment. But hey, that’s what a real Muay Thai fighter would do against one of his peers, and his willingness to do so at UFC 128 in March led to one of the purest displays of the Art of Eight Limbs that you will ever see in the Octagon. For striking aficionados, this bout, won by Barboza via close, but unanimous, decision, was gold. WATCH FIGHT REPLAY

4 – Kingsbury and Maldonado gut one out
Former college football player Kyle Kingsbury wasn’t the most highly-touted prospect to emerge from the eighth season of The Ultimate Fighter, but quietly and steadily, “KingsBu” began to make his mark, most notably with a Fight of the Night win over Jared Hamman and a 21 second destruction of Ricardo Romero. But against Brazil’s Fabio Maldonado, an undefeated pro boxer, Kingsbury showed not only his growing skill set, but his heart, as he and Maldonado engaged in one of those grueling, blood and spit flying brawls that make you want to stand up and cheer when it’s all over. Kingsbury won the bout via unanimous decision, and while you would love to see the light heavyweights do it again, you get the impression that after their 15 minute blood and guts scrap, they’ll want a little break from each other for the moment. WATCH TUF 13 FINALE REPLAY (FREE IN US) (INTL)

3 – Sanchez ekes out classic with Kampmann
In talking to one of Diego Sanchez’ welterweight peers earlier this year, he said that the fearless Albuquerque warrior has engaged in so many wars that his “cuts are starting to have conversations with each other.” This was never more evident than in Sanchez’ March battle with pinpoint striker Martin Kampmann, who opened his opponent’s face up by the middle of the second round and appeared to be on his way to a possible stoppage victory. But Sanchez refused to back down, and his rapid fire flurries and relentless attack not only inflicted damage on his opponent as well, but allowed him to eke out an exciting unanimous decision victory in a bout that proved why fans never get disappointed when “The Dream” takes to the Octagon. UFC President Dana White agreed, giving $160,000 bonus to both fighters. WATCH UFC ON VERSUS REPLAY

2 – Cruz and Faber show why fans love the bantams
The grudge between bantamweight stars Dominick Cruz and Urijah Faber was real, so before their UFC 132 main event earlier this month, there was a fear that the fighters wanted so badly not to lose to their rival that they would be too cautious. Not a chance. Instead, Cruz and Faber fired off all their tricks at one another, fought at the insanely high pace 135-pounders are known for, and gave the fans a 25 minute fight to remember that Cruz won by unanimous decision. In the process, he evened the score with the only man to ever beat him, and also set the stage for what fans hope will be a third bout. WATCH UFC 132 REPLAY

1 – Edgar and Maynard set high standard for 2011 on New Year’s Day
Speaking of third bouts, fight fans were guaranteed another match between UFC lightweight champion Frankie Edgar and number one contender Gray Maynard after a UFC 125 draw in January that nearly ended in the first round when “The Bully” rocked and dropped the champ and nearly finished him. But Edgar remarkably made it out of the opening frame and began the task of not just surviving, but getting back on track to retain his title. And he did just that, stunning the Las Vegas crowd with a show of resilience that cemented his place on top of the 155-pound weight class. And kudos go to Maynard as well, who battled past a gas tank depleted by his frenzied first round attack to continue to go after Edgar in a quest to repeat his first win over “The Answer” and take home the championship belt. In the end, the two fighters were disappointed by the five round draw verdict, but no one who saw that 25 minute bout would ever say that they felt the same way. WATCH UFC 125 REPLAY WATCH ROUND ONE FREE