20-Disc Collection Features the Best of the Year

FROM ANCHOR BAY ENTERTAINMENT:
A BOX AS BIG AND BOLD AS THE YEAR INSIDE!

On DVD at Best Buy on November 8 - pre-order now!
Everywhere else on December 6 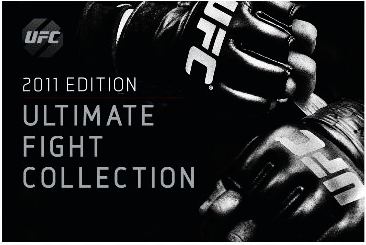 Lesnar vs. Velasquez.  Silva vs. Belfort. Shogun vs. Jones. St-Pierre vs. Shields. These are some of the top matches of the year, the ones that fight fans want to relive over and over again. On December 6, Anchor Bay Entertainment and the Ultimate Fighting Championship® give them the chance with UFC®: Ultimate Fight Collection 2011 Edition, an awesome anthology of the epic battles fought between July 2010 and June 2011. This 20-disc DVD set captures every important moment with over 50 hours of footage – including 10 hours of content never before available on DVD. The set will get an exclusive roll out at Best Buy on November 8.

UFC®:  Ultimate Fight Collection 2011 Edition is a look back at one of the most exciting 12-month periods in the world’s fastest growing sport. Included here are bouts from UFC® 116 – UFC® 131, UFC® Fight Night 22-24, The Ultimate Fighter® Finale 12 & 13 and UFC® Live 2-4. These are the fights that gave us four new champions, stirred-up old rivalries and had unforgettable outcomes.

UFC®:  Ultimate Fight Collection 2011 Edition is a document of the sports history being made by the UFC®.  These tumultuous and thrilling matches can now be found within an unequaled compilation that will bring fans to their feet. This is 170 fights, 50 hours and 20 discs – it’s the biggest and boldest box set of the year!