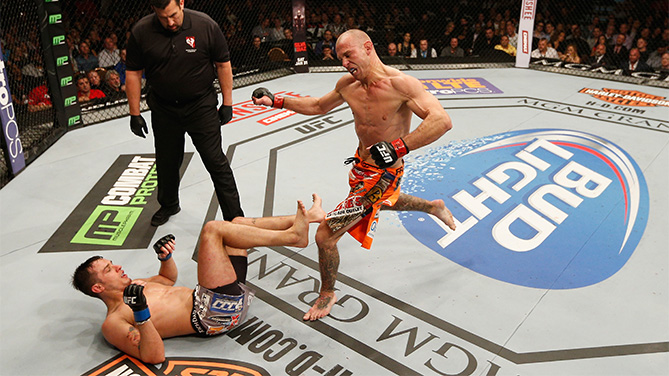 Cerrone (26-6, 1 NC) walked Jury down to kick off the bout, with the Michigan native responding with a quick takedown. The two got tangled together on the mat, Cerrone trying to lock Jury’s arm up. After he got Jury where he wanted him, Cerrone transitioned and then took his foe’s back. Jury’s defense was solid, but with under a minute to go, Cerrone found his neck for a rear naked choke attempt. Jury escaped, but he was now down one round on the scorecards.

Jury (15-1) got back into the fight in round two, using a stick and move strategy to keep Cerrone from sitting down on his strikes. It wasn’t flashy, but it was effective, allowing “Fury” to send the bout into the third round with the prospects of a win still on the board.

Cerrone imposed his will once more in the third, jarring Jury with a flush kick to the head that put the Alliance MMA fighter on the defensive. Once his head cleared, he tried to get the fight to the mat, but Cerrone wasn’t biting. In the final seconds, Jury found himself on the deck and Cerrone fired off a ferocious series of leg kicks, putting a cap on his victory.
> Watch: Donald Cerrone Backstage Interview 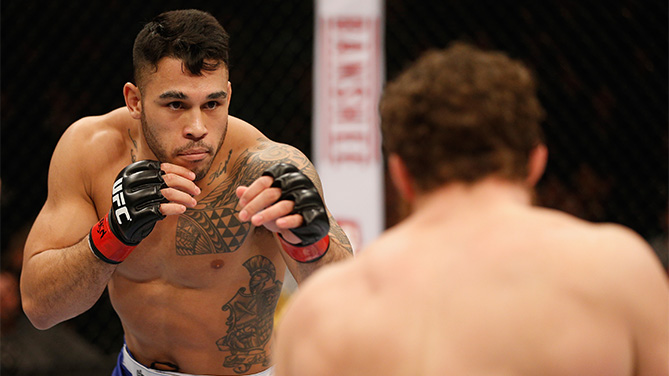 It wasn’t pretty, but Brad Tavares got back in the win column in his first bout since an August loss to Tim Boetsch, scoring a three-round unanimous decision over Nate Marquardt.

There was little sustained action in the opening round, but as the two remained standing for the first five minutes, the sharper of the two fighters was Tavares.

Marquardt tried to change the playing field in the second, as he sought a takedown in the first minute, but Tavares tossed the attempt to the side easily. The pace slowed from there, with neither fighter pushing the action much, drawing the ire of the fans in the process.

There was little reprieve for the crowd in the final round when it came to action, but Tavares did just enough to take the last stanza and the victory. 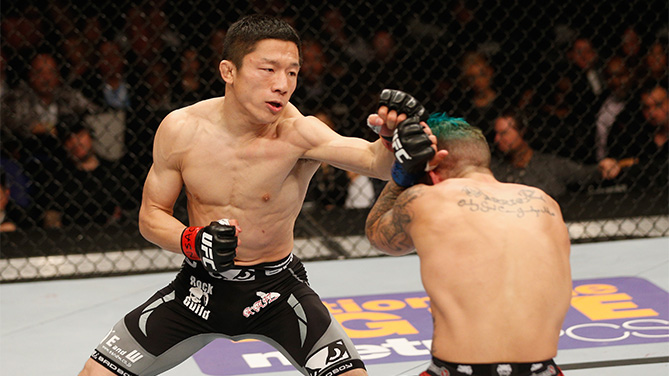 The first round was a tough one to score, with both fighters getting in their share of shots, but largely coming up short or wide with various offensive attacks.

Horiguchi (15-1) made an early impact with his striking in the second though, bloodying Gaudinot under the left eye. The New Jersey product attempted a standing head and arm choke in response, but Horiguchi broke free quickly and continued to win the stand-up battle as he started to pull away.

Gaudinot (6-4, 1 NC) tried to make a run in the final frame, but he was unable to figure out the tricky Horiguchi’s movement and rhythm, allowing the Tokyo product to lock up the points win.
> Watch: Kyoji Horiguchi Backstage Interview 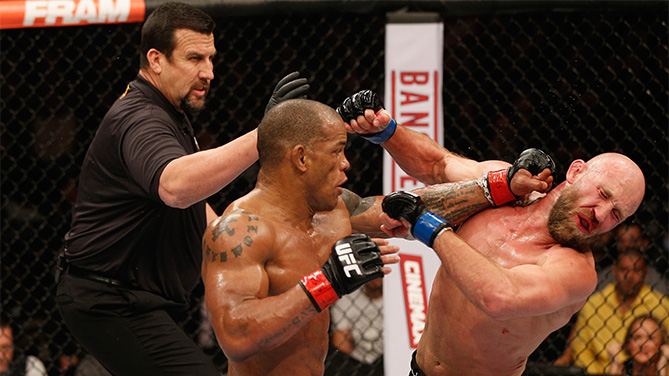 Welterweight contender Hector Lombard wasn’t able to give the spectacular performance many expected out of him in the main card opener against the returning Josh Burkman, but he did score a clear-cut victory, outpointing Burkman over three rounds.

Lombard stalked Burkman throughout the first round, getting in his share of shots as Burkman tried to counter. Unfortunately, Lombard didn’t leave him many opportunities to do that, resulting in a rough round on the scorecards.

After the slow start to the bout, both fighters began letting their hands go in the second, with Lombard swinging for the fences and Burkman playing possum before firing back with hard punches of his own. The pace slowed after that, but the intrigue level rose considerably, as Burkman was able to take Lombard’s hardest shots without flinching. The question was, did he have enough firepower to get the Cuban’s respect and make a late comeback?

The bout went to the mat early in the third, Lombard controlling the action but not doing much with the position. In the second minute, Burkman got back to his feet, but then got rocked with a right to the side of the head. The Utah native shook off the blow, but he was unable to put his offense together, allowing Lombard to ride out the clock and pick up the decision win.

With the victory, Lombard ups his record to 35-4-1 with 1 NC; Burkman, who was fighting in the UFC for the first time since October of 2008, falls to 28-11.
> Watch: Hector Lombard Backstage Interview