Click on 'watch fight' to view these matchups on UFC.tv - UFC Fight Library subscribers can view a la carte fights for free!

There have been plenty of insane occurrences inside the Octagon since we last brought you a list of crazy fight finishes. From comebacks to underdog victories, here are the most bananas bouts in the last few years. 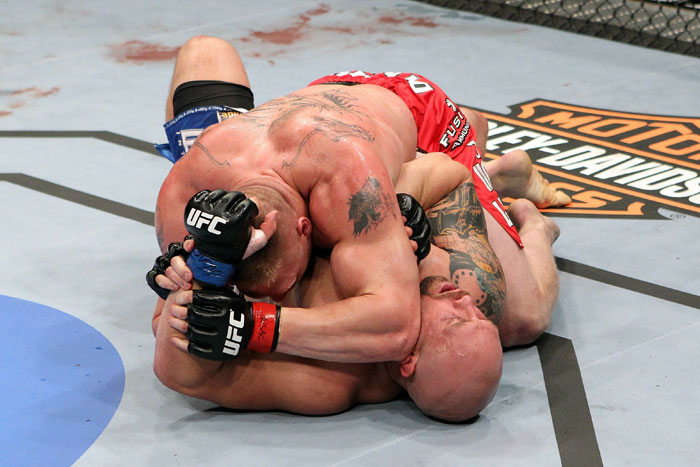 1. Brock Lesnar vs. Shane Carwin at UFC 116 - Two titans with UFC belts clashed, with Carwin dominating the opening frame with punches and vicious GnP. It seemed like the fight was just waiting to be stopped -- but Lesnar somehow survived that round, beaten up and bleeding but still smiling. Carwin, on the other hand, looked bewildered. When the two came out for the second stanza, Lesnar scored an immediate takedown (expected), then locked in an arm-triangle choke (definitely unexpected). Whether it was fatigue, techinique or just shock that *Brock Lesnar* was going for a submission, Carwin tapped, unifying the UFC heavyweight title. watch fight

2. Anderson Silva vs. Chael Sonnen at UFC 117 - It may be the greatest fight in the company's history, all due to the twist ending that proved a champion's mettle warranted his metal. After a solid year of Sonnen's trash talk, he backed it up by taking down Silva every chance he got. Sonnen pummeled the previously untouchable Brazilian for the first four rounds to easy 10-9 victories. But with less than two minutes left in this 25 minute epic, the UFC middleweight champion established wrist control, locked up Sonnen in a triangle (his nemesis), and attacked Sonnen's prone arm for the tap at 3:10 of the 5th. watch fight

3. Tim Boetsch vs. Yushin Okami at UFC 144 Yushin Okami looked dominant, fast and accurate, as he beat up Tim "The Barbarian" Boetsch for 10 minutes, threatening a fight stoppage with ground-and-pound against the fence when the second bell went off. Back in their corners, it was clear that a Boetsch win would require a miracle, so that's what "The Barbarian" did. The round started and Boetsch landed punches and head kicks, staggering the spent Okami before TKOing him in only 54 seconds. watch fight 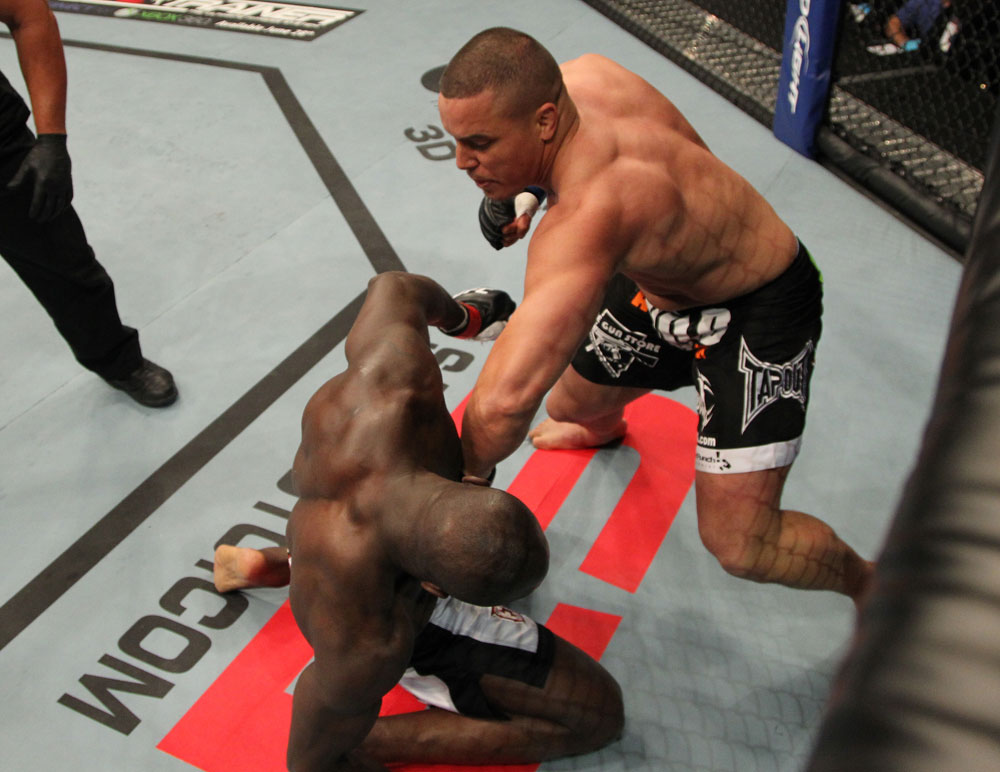 4. Cheick Kongo vs. Pat Barry at UFC Live - Two former professional kickboxers delivered on the promise of a strikers' duel inside the Octagon. Shocker one: Pat Barry dropped the bigger Chieck Kongo twice in the opening 2 minutes. Shocker two: Kongo battled back from what looked like a flash knockout, stood up and reflexively caught the granite-chinned Barry with a knockout punch. The former K-1 star Barry had never been knocked out in kickboxing, MMA or sparring -- until 2:39 into the first round of that main event. watch fight

5. Frankie Edgar vs. Gray Maynard at UFC 125 and UFC 136 - In the two incredible title fights between then-champ Frankie Edgar and Gray Maynard, "The Answer" had his clock cleaned over and over again in the first round but gutted it out and showed up for the second. At UFC 125 (watch fight), Edgar's nose was bleeding like a faucet after eating what seemed like a thousand of Maynard's devastating uppercuts and overhand rights. At UFC 136 (watch fight), it was a nearly identical story of taking punishment that would stop about any other fighter, but Edgar simply refused to quit. Both times, Edgar worked his way back with his speed and resilience, first to a deserved (if disheartening) draw at 125, and then with an exclamation point fourth-round KO to finish the series at UFC 136.

6. Frank Mir vs. Antonio Rodrigo Nogueira at UFC 140 - The end result of Frank Mir's second tangle with fellow former champion Minotauro Nogueira became a career-defining moment for Mir. Nogueira put Mir in a bad spot early with punches that wobbled then dropped Mir. Smelling blood, BJJ black belt "Big Nog" latched on a guillotine choke and pulled guard. Unfortunately for him, Mir is also a BJJ black belt who defended the choke and reversed into top position. Then Mir locked on a kimura and, when Nogueira refused to tap, broke Nogueira's arm right, forcing the ref to wave off the fight. watch fight

7. Martin Kampmann vs. Jake Ellenberger at The Ultimate Fighter: Live Finale - Martin Kampmann has made a career of comeback victories, including submission finishes over Jorge Rivera and Drew McFederies in bouts where the Danish "Hitman" was dropped early. Probably the most amazing of these comeback wins by Kampmann was against the explosive and powerful knockout artist Jake Ellenberger. Ellenberger flattened Kampmann with strikes and appeared to have the fight won, but Kampmann defended well enough to see the second.That's when the Hitman turned the tide with a series of knees that dropped and finished Ellenberger for a win and a Knockout of the Night bonus. watch fight 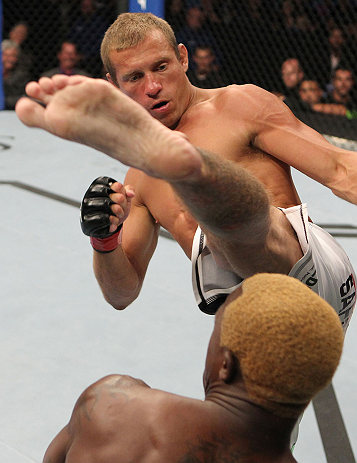 8. Donald Cerrone vs. Melvin Guillard at UFC 150 - In what may be a UFC record, Donald Cerrone and Melvin Guillard earned Fight of the Night and Knockout bonuses in only 76 seconds inside the Octagon. Former teammates and training partners, Cerrone and Guillard brought their trademark come-early-and-often fighting styles to the center of the Octagon in a bout that looked kind of like Barry/Kongo, but at 155 pounds and 9 times as fast. Guillard pounced first, dropping Cerrone with hard strikes. "Cowboy" fought back and slammed a kick into the side of Guillard's unsuspecting head, then followed up with punches. The end result? $2,376 per second of bonus material. watch fight

9. Bobby Green vs. Jacob Volkmann at UFC 156 - Debuting Strikeforce fighter Bobby Green faced overcame obstacles in both his opponent and in his referee in his UFC debut, taking him from unknown to teacher's pet. In the first two rounds, Jacob Volkmann, a four-time NCAA Division I All-American wrestler, took Green down, got his back, and ended the round positioning for a rear-naked choke. Even when Green mounted some offense in the second -- in the form of effective elbows from the inarguably dominant top position -- referee Kim Winslow intervened with a standup. Despite the gods seemingly conspiring against him, Green pushed the pace in the third and landed even more elbows on the ground, forcing Volkmann to give up his back,. Then Green sunk in a rear naked choke of his with only 35 seconds remaining for a Submission of the Night win. When later asked how UFC fighters could keep their jobs safe, president Dana White gave this advice: "Be like Bobby Green!"

10. Antonio Silva vs. Alistair Overeem at UFC 156 - In the co-main event, two angry behemoths collided in a heavyweight struggle that had become very personal: At the pre-fight press conference, Antonio "Bigfoot" Silva scowled "I'll make you respect me" and Alistair Overeem retorted "I'm going to @#$%ing destroy you". The early rounds were all Overeem, who used his K-1 striking and superior speed to pick "Bigfoot" apart, while taunting Silva by keeping his hands low. At the start of third, "Bigfoot" capitalized on his opponent's hubris, rushing forward and clobbering Overeem him against the cage for an emotional KO only 25 seconds into the round. watch fight 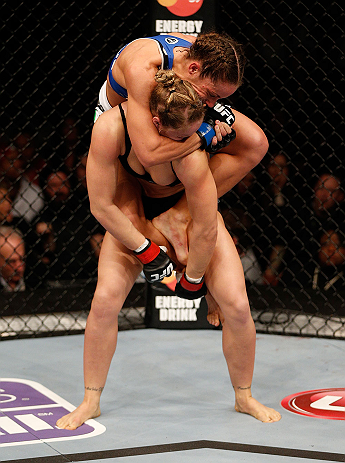