They say MMA is exciting because anything can happen -- and it's true.

They say MMA is exciting because anything can happen -- and it's true. A dominant performance can be instantly undone by a simple mistake; a seemingly hopeless underdog can still twist out a win in the final seconds of a fight. 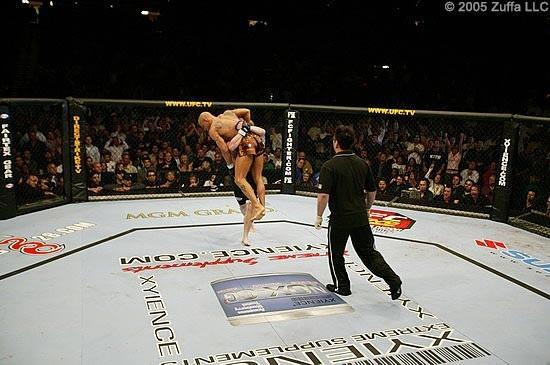 Perhaps the most famous comeback in UFC history is Matt Hughes over Frank Trigg at UFC 52 for the Welterweight Championship. Minutes into the first round, Hughes was in worst case scenario mode with Trigg on his back trying to secure a rear naked choke. Hughes did not give up and amazingly reversed the position mere seconds later. Hughes sunk in a choke of his own and retained his belt. Performances like these make champions and one day UFC Hall of Famers.

1. Paulo Thiago vs. Josh Koscheck, UFC 95 - Paulo Thiago's debut in the Octagon was greeted by three minutes and change of Josh Koscheck trying to knock his head off. "Kos" stalked Thiago with his trademark loaded up right hand that three months earlier had rendered Yoshiyuki Yoshida unconscious. Thiago ducked and dodged that fist missile for nearly three and half minutes before he countered Koscheck suddenly with an uppercut followed by a fight ending left hook. Not a bad way to start a UFC career.

2. Terry Martin vs. Chris Leben, UFC Fight Night 11 - Every UFC fan predicted a brutal knockout finish from a big puncher match-up like Chris Leben and Terry Martin. After 10 minutes of action, the duo were still on their feet slugging it out. Both fighters were gassed from two rounds of throwing power punches and absorbing their punishment. Martin landed a series of blows that staggered the hard headed Leben. It looked as if Martin only needed to land a few more big wallops to finish "The Crippler" for good. With just over a minute left in the final round, Martin made the mistake of dropping his guard to taunt Leben. That moment was all "The Crippler" needed to set-up a quality counter and KO the brazen Martin. 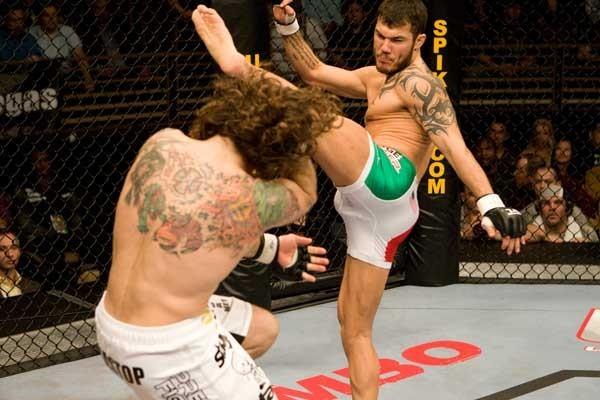 3. Roger Huerta vs. Clay Guida, TUF 6 Finale - Down two rounds to the cardio-machine Clay Guida, Roger Huerta knew he had to do something near miraculous in this third round to win. Waiting for the round to start, Huerta was psyching himself up like a mad man and, just in tune, so was Guida. The two caught eyes and in that moment everyone in the audience, at home and in the cage knew that something wild was about to happen. Guida and Huerta flew at each other, resulting in Huerta dropping Guida with a series of hard strikes. "El Matador" dove on Guida's back and sunk in the rear naked choke to punctuate his victory. watch fight

4. Scott Smith vs. Pete Sell, TUF 4 Finale - This fight was destined to be a fan favorite: two fighters looking for a one punch knockout and zero thought of grappling. The first round delivered on that promise with Pete Sell and Scott Smith standing and trading bombs for the entirety. The second round started with much of the same until Sell finally tilted the fight in his favor with a body shot. Smith reeled in pain from Sell's right uppercut to his liver and appeared nearly helpless against the cage. Sell rushed in, thinking this would be his crowning moment, instead he was met with a final overhand right by Smith. Sell was out instantly, which was good for Smith because he fell to canvas unable to continue as well. A one punch knockout was expected and delivered by "Hands of Stone" Scott Smith. watch fight

5. Minotauro Nogueira vs. Heath Herring III, UFC 73 - Former PRIDE Heavyweight Champion Antonio Rodrigo Nogueira was famous for two things: submission victories and an iron chin. No one could have expected in Nogueira's UFC debut that Heath Herring would almost knock him out via high kick. In what seemed like a nightmare to "Big Nog" fans, for the first time against an opponent not named Fedor or Henderson, it appeared like Nogueira was going to get beaten. Herring hesitated with his next attack just enough for Nogueira to shake the cobwebs loose. Nogueira survived that first round calamity and came back in the second and third focused. Nogueira out fought Herring on the ground and standing the other two rounds, keeping his winning streak against Herring unmarked.

6. Jeremy Stephens vs. Rafael dos Anjos, UFC 91 -  If only fights lasted two rounds instead of three rounds in the UFC. If only punching wasn't allowed in the UFC. These were the thoughts running through Rafael dos Anjos' head the nanosecond before Jeremy Stephens nearly uppercutted it off 39 seconds into the third round. For two rounds, these two young lightweights fought a fast paced grappling match in favor of the Brazilian. Dos Anjos showed off his superior takedowns, Brazilian Jiu-Jitsu and overall ground game, which quelled all of Stephens' electric stand-up. Coming out for the third round, "Lil' Heathen" knew only a knockout could secure him a win and he did just that. With nothing to lose, Stephens loaded up a fight ending uppercut that when fired off landed perfectly. That punch won Stephens the fight and "Knockout of the Night" honors. 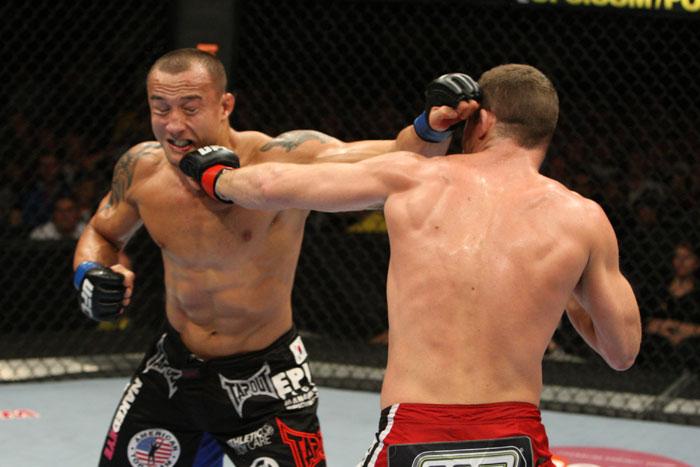 7. Michael Bisping vs. Denis Kang, UFC 105 - Four months after being knocked out with an overhand right, Michael Bisping was experiencing deja vu when Denis Kang tagged him with an overhand right a minute into their bout. Bisping fell to the canvas and Kang jumped right on top of him. The following four minutes was "The Count" in survival mode with Kang looking to finish what he had started. Bisping defended effectively from his back and pushed the fight into the second round. The biased British crowd cheered Bisping on as he attacked the second round with new energy. Head kicks, two big takedowns and a lot of ground and pound secured another win for Bisping on his native soil. watch fight

8. Nate Diaz vs. Kurt Pellegrino, UFC Fight Night 13 - The night started off poorly for Nate Diaz: he was taken down immediately, gave up his back, was taking shots to the side of the head and he hadn't landed one punch of his own yet. It got overwhelmingly worse when Kurt Pellegrino locked on a crucifix position and rained down punches which cut Diaz open. Diaz gutted it out the rest of the first round, giving himself another shot at his Jersey shore opponent. The second round started out much the same with "The Batman" scoring another takedown on Diaz, but this time Diaz was ready. Using his long legs, Diaz defended better off his back and, eventually, secured a fight ending triangle choke submission. For Diaz's victory celebration, he offered up a double gun salute to the crowd while Pellegrino tapped. watch fight

9. Todd Duffee vs. Mike Russow, UFC 114 - In his first fight since setting the record for fastest-ever knockout in the UFC, Todd Duffee entered the Octagon escorted by his corner and seven mountains of hype. He spent the first two rounds showing off that devastating power against a seemingly iron-jawed  Mike Russow, whose grappling prowess was ineffective against the gargantuan Duffee. Although Duffee gassed, Russow was further crippled by a broken arm, and it appeared that the crowd would have to wait the full fifteen minutes for the unanimous decision... until an over-the-top right halfway through the third round sent Duffee careening toward the canvas, out cold. 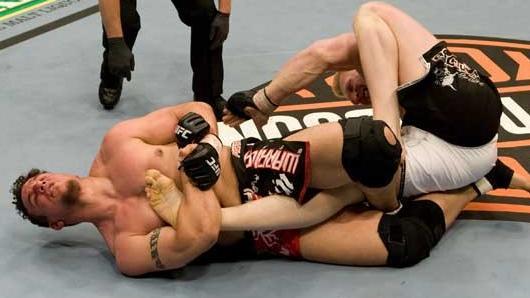 10. Brock Lesnar vs. Frank Mir I, UFC 81 - It did not take long for Brock Lesnar to make an impact in the UFC. That "impact" was his XXXL sized fist hitting Frank Mir's face almost as soon as the bell rang in his debut fight. All 265+ pounds of Lesnar dove onto the fallen Mir looking to finish the fight as quick as it started. In the midst of Lesnar pounding Mir with hammer fists, referee Steve Mazzagatti stopped the action to warn Lesnar of illegally striking the back Mir's head with said hammer fists. With that momentary break, Mir regained his faculties. As Lesnar attempted to achieve top position, Mir used his superior Brazilian Jiu-Jitsu to wrap up one of Lesnar's legs. Mir wrenched back on the isolated leg and Lesnar was forced to tap. watch fight free

11. Rashad Evans vs. Forrest Griffin, UFC 92 - In Forrest Griffin's first UFC Light Heavyweight title defense he took on burgeoning knockout artist Rashad Evans. The opening two rounds went quite favorably for the Champion. Griffin scored with a variety of strikes early and often, which kept the heavy handed Evans retreating and on defense. The third frame started with much of the same until Evans timed and caught a Griffin low kick. Evans forced Griffin to the ground and dealt out some excessive ground and pound. A couple solid elbows and a whole lot of left hooks brought an end to Griffin's title reign and Evans was crowned the new UFC Light Heavyweight Champion. watch fight