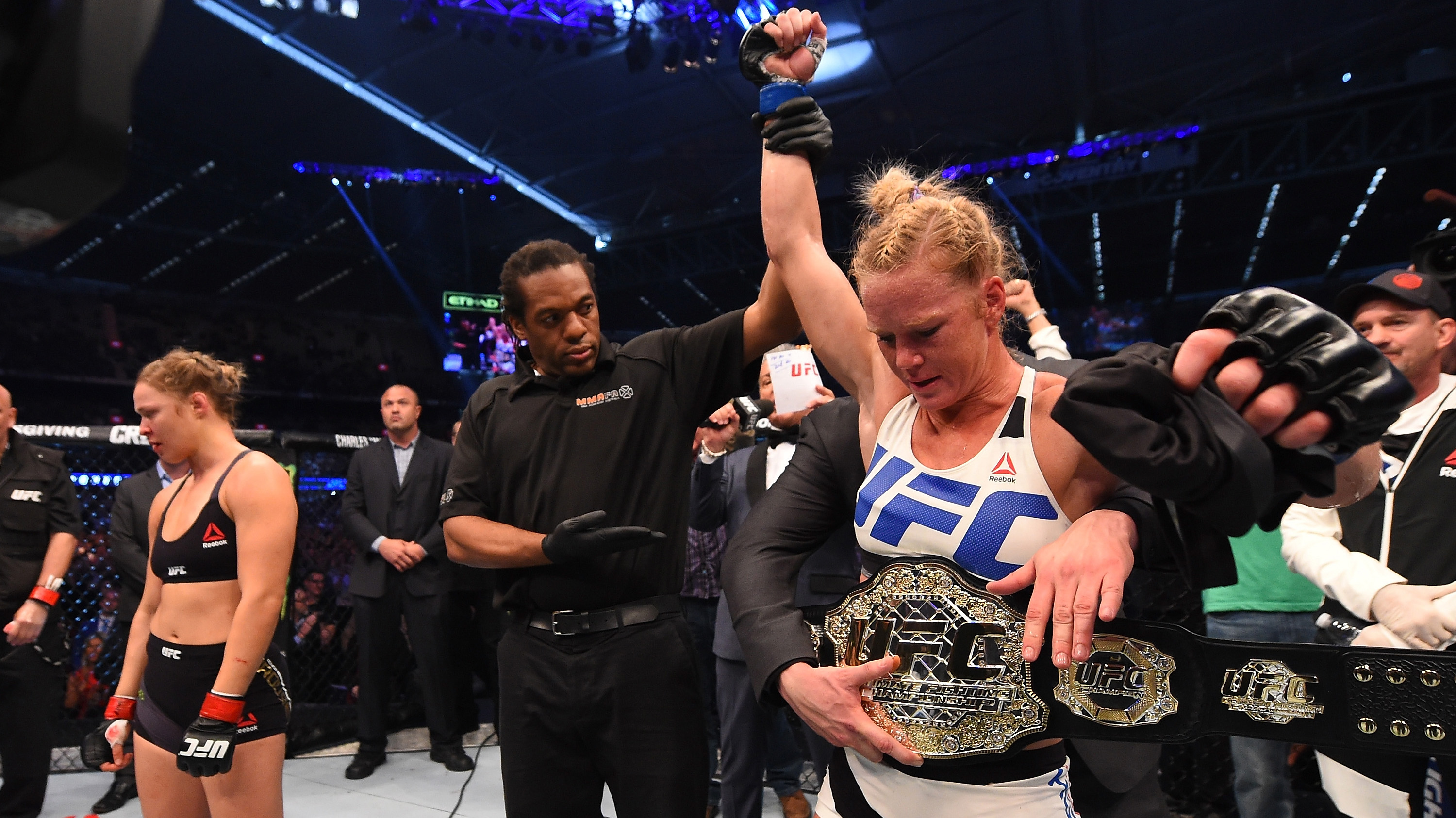 The final fight of 2017 inside the Octagon is a highly anticipated battle for the women’s featherweight title between undisputed champion Cris Cyborg and challenger Holly Holm, the former bantamweight titleholder who looks to make history by becoming the first female fighter to hold UFC gold in two different divisions.

Cyborg claimed the title back in July with a third-round stoppage win over Tonya Evinger that showcased a more patient approach coupled with the unmatched power and ferocity that has made her one of the most feared fighters on the planet. It was the official coronation of a previously uncrowned queen and another impressive performance in a career filled with punishing stoppages, and she’ll be looking to add another finish this weekend that may just find its way onto the list below.

Three months after winning the strawweight title (more on that shortly), Jedrzejczyk squared off with TUF 20 bronze medalist Jessica Penne in her first title defense and quickly proved that her place atop the division was secure.

Jedrzejczyk was all over Penne from the jump, sniping home clean shots that quickly left the challenger bruised and bleeding and the champion never let off the throttle. For nearly three rounds, she battered Penne from pillar to post, turning the championship contest into a live sparring session that was entirely one-sided.

While Jedrzejczyk would follow up her effort in Berlin with a series of impressive performances, her first title defense was her most vicious.

After chasing Correia to the fence, Rousey happily traded punches with the Brazilian challenger, stiffening her knees with a right hand. A knee to the midsection followed, causing Correia to wince and cover up, and when she did, Rousey turned out the lights with a clean right hand to the temple.

At the time, this performance felt like it might be the start of something truly special in Rousey’s career – a first-round knockout win on the road in Rio de Janeiro over a heated rival just as the mainstream media was really starting to become infatuated with Rousey.

Instead, it proved to be her final successful title defense and last UFC victory to date, but that doesn’t diminish how impressive her performance was.

Nunes was brimming with confidence and fueled by frustration, annoyed that she was cast as a supporting character in the lead-up to the fight despite being the reigning champion and coming off a dominant effort five months earlier. Rousey, meanwhile, hadn’t fought in 13 months, adding to the intrigue surrounding the UFC 207 main event.

“The Lioness” connected with powerful shots right out of the chute that left Rousey reeling. As she tried to return fire, Nunes continued to march her down and crash home punishing blows, turning Rousey’s comeback fight into her own coming out party.

In the days leading up to the fight, Jedrzejczyk told everyone not to worry about learning how to properly pronounce her last name because after UFC 185, they were all going to be able to call her “Joanna Champion.”

Then she went out and made it happen.

You could see the moment Esparza knew she was in trouble; it was like the slow-motion replay of Ralph Wiggum’s heart breaking in that Valentine’s Day episode of The Simpsons. She couldn’t get Jedrzejczyk to the ground – couldn’t even get close to completing a shot – and as the denials started to pile up, she knew it was not her night.

And that’s when Jedrzejczyk unleashed hell.

While her follow-up performance against Penne was more vicious, this one was the eye-opening start of a 32-month reign atop the division.

The fight started and Zingano rushed across the cage, missing with a wild flying knee attempt. As the combatants went to the ground, it didn’t seem all that dangerous, but then again, when has getting into a grappling situation against Rousey ever been a good idea?

Within seconds, the champion had latched onto the challenger’s arm, forcing Zingano to tap.

Though it goes down in the record books as an armbar finish like so many other of her victories, this wasn’t the same maneuver that felled Miesha Tate twice and Liz Carmouche in the inaugural UFC women’s championship fight. This was Rousey improvising on the fly and finding a modification that worked all the same.

For me, this is the best women’s championship performance no one ever seems to talk about and that’s surprising to me because it was a truly breathtaking performance in the midst of a tornado and the starting point for Nunes’ championship reign that continues to this day.

The fight was promoted to the main event of the summer blockbuster at the 11th hour and while Tate was the one in the spotlight heading into the cage, Nunes stole the show.

The Brazilian challenger rocked the champion with clean, powerful shots early and refused to give her time to recover. She stalked Tate, picking her off with more heavy shots each time an opening presented itself and once the damage started to pile up and the action hit the floor, Nunes quickly sunk in the choke, squeezed out a tap and claimed the bantamweight title.

Davis actually landed the first good shot of this fight – a clean jab that popped Rousey’s head back as they first started to exchange in the center of the Octagon.

Unfortunately for the Canadian challenger, the champion connected with an overhand right a couple seconds later, followed it up with a beautiful hip toss and a torrent of unanswered punches that left Davis trying to take down referee Yves Lavigne after he’d stepped in to stop the fight.

This was the most dominant performance of Rousey’s career and remains – in my opinion – the perfect encapsulation of what she was capable of inside the cage when she was at her best. The punch that started it all wasn’t anything special, but she quickly recognized the opportunity in front of her and went into finishing mode, hitting a powerful throw before pounding out the win.

Rousey was never better than in this fight if you ask me.

I was midway through a paragraph about Tate once again coming up short in her quest to win UFC gold when she spun Holm to the ground in the center of the Octagon with about two minutes left in the final round. Thirty seconds later, I was writing about Tate’s improbable come-from-behind victory and how raw and powerful it was to see her collapse into tears in the cage when the fight was over.

While most people will probably always remember Tate for her rivalry with Rousey, this performance was emblematic of her professional career and should be her calling card. She always kept pressing forward, always kept chasing her championship dreams and her success was due as much to her heart and moxie as it was her athleticism and skill in the cage. 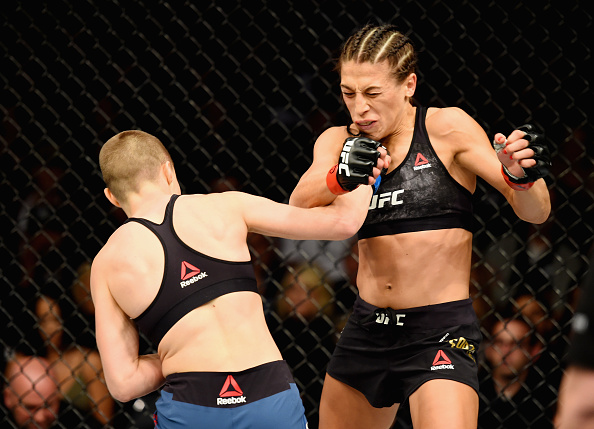 The first time Namajunas fought for the strawweight title, she wasn’t ready. She was still too young, too raw, too unpolished and Carla Esparza took full advantage, wrestling Namajunas to the canvas again and again before finally putting her away just under 90 seconds into the third round.

But Namajunas was a different fighter when she stepped into the Octagon to fight for the title for a second time. Trevor Wittman’s teachings had taken root and the former elite prospect picked a grand time to show the world that she’d finally put everything together.

The actual finish is the moment burned in everyone’s collective memory – Holm’s left foot landing flush on the side of Rousey’s neck, sending the unbeaten champion crashing to the canvas in a heap – but just as with Rousey’s unsuccessful comeback fight against Nunes 13 months later, the outcome of this one was determined well before the actual finish took place.

Rousey’s aggressive approach played right into Holm’s strength as a counterpuncher and the even-keeled former boxer took full advantage of the champion’s willingness to charge into the fray. By the end of the first, Rousey, bleeding from the mouth, looked spent and Holm appeared to be in complete control.

The short, sharp left that battered Rousey in the first returned early in the second and when made like a matador and ducked out of the way of the champion’s wild charge forward, you got the sense a new champion was going to be crowned.

Twenty seconds later, it was over. Holly Holm had shocked the world.