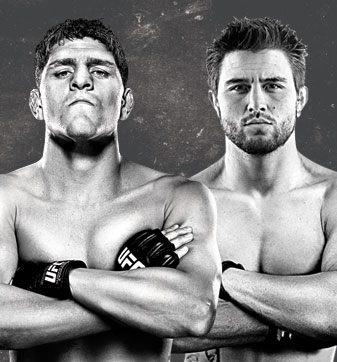 In Person! Diaz vs. Condit. Big Country vs. Werdum. Koscheck vs. Pierce. UFC 143 is loaded with wars, and the main event alone makes it worth the trek to the desert. Plus, there are tons of free fan events going on, so score your tickets, book your travel and come see us in person.

On the Big Screen in 3D Sure, you've seen action on the big screen but never like this! For the first time ever, a UFC Pay-Per-View will be broadcast live in movie theaters on the big screen! Find a screen near you and buy tickets now at www.ufc.com/3d. Plus, at select theaters in Vegas, Mobile, Mesa, Denver and Fairfax, the night will be hosted by a UFC fighter.

Pay-Per-View... or Pay-Per-View 3D! UFC 143 can be seen on Pay-Per-View through your local cable
operator. (Available on Main Event in Australia; Sky Arena in NZ; UK fans see it for free on ESPN at 3 am.) If you've got a 3D television, select cable providers (including DirecTV, At&T U-verse, Cox and Comcast) are also offering the fights in 3D - check yours for details. Besides Superman punches that look like they're going to break through your TV, the 3D broadcast will feature its own announcing team.

On Xbox LIVE Download the UFC on Xbox LIVE app to your Xbox 360 and get free access to exclusive programming, live streams of the weigh-in and press conference and more (US and Canada only for now - more countries coming soon!). Plus, during Xbox LIVE Free Gold Weekend, you can use the upgrade features like fight picks and an expanded video on demand menu. Then on Saturday, watch the Pay-Per-View live and check out interactive features such as fight card displays.

UFC.tv
Re-watch every knockout from multiple angles. Keep the camera on your
favorite fighter even during his opponent's walkout. Hear every
word Nick Diaz' corner shouts (on second thought...). Watch the free demo of UFC.TV
with its multiple camera angles, HD-quality stream, audio feeds and DVR
controls. It's a futuristic experience available at your fingertips
today - www.UFC.tv.

At a bar It's Super Bowl weekend, so you've already got wings on your mind - why wait until Sunday!? Visit bars.ufc.com from your computer or mobile device to find a location showing the big guys nears you.

On your Android On the move with your phone? Use the UFC Android Application watch UFC 143 live.

On Your Favorite Site The biggest online video portals are catching UFC fever - catch the Pay-Per-View on YouTube, UStream, Yahoo!, and more.

On ROKU This UFC experience combines internet streaming on large-screen televisions. Make sure you download the UFC Channel on
your ROKU set-top box.