Whether on top or underneath, straight, inverted, reverse, accompanied by a triangle, belly down, upside-down or even flying, the armbar is the submission that defies limitations.

On February 23rd at UFC 157, the best arm-collector in the biz, “Rowdy” Ronda Rousey, will look to add another extremity to trophy case. The undefeated UFC women’s bantamweight champion has earned all of her wins by first-round armbar. In honor of the "Queen of Armbars” making her UFC debut, here is a list of the top limb-twisting armbars ever in the Octagon. 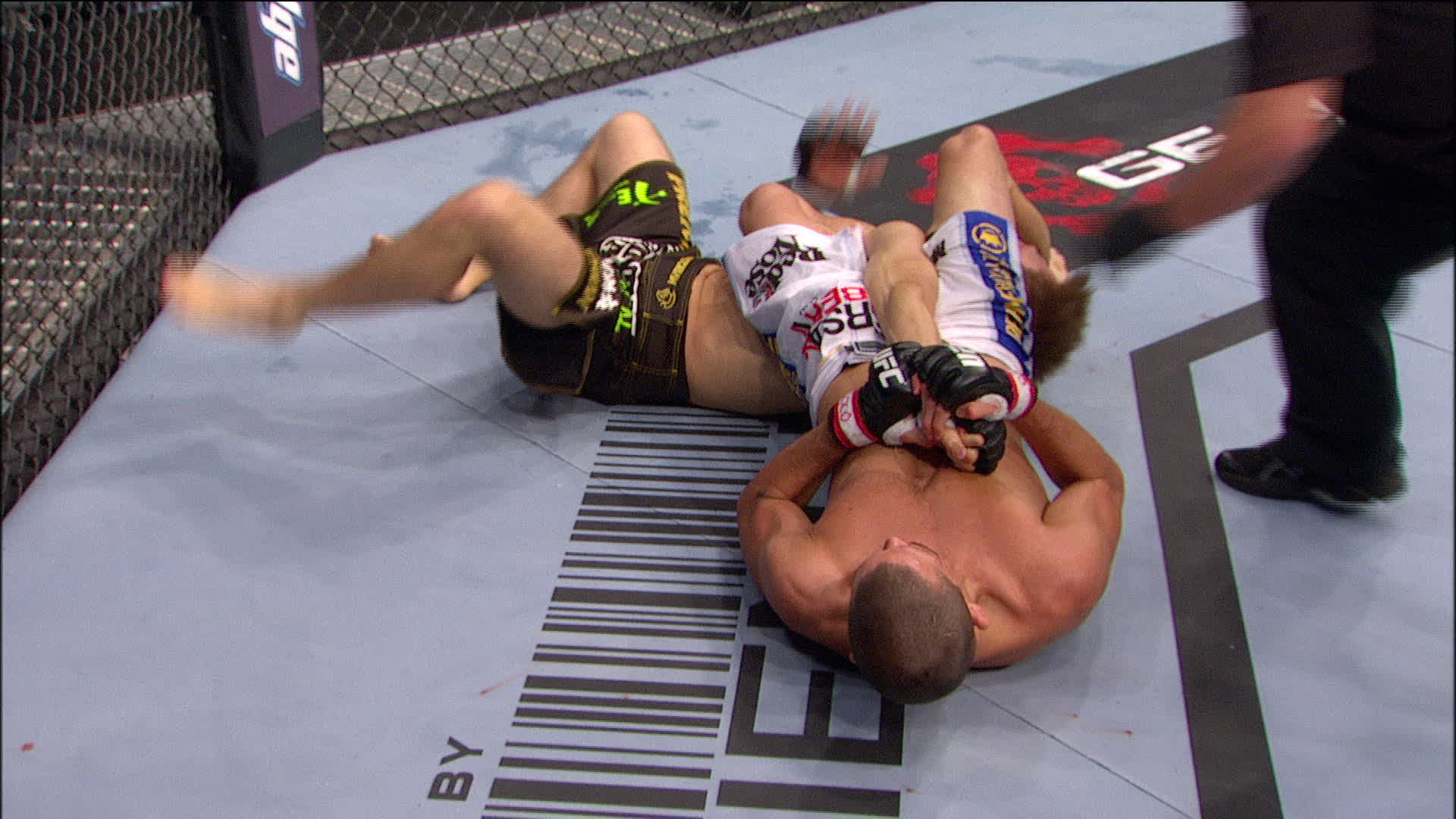 In his return to the lightweight division, Nate Diaz severely outclassed former PRIDE lightweight champion Takanori Gomi in a flawless first-round, Submission of the Night victory. The younger “Stockton Slapper” went to work on the feet overwhelming the “Fireball Kid” until Gomi dropped, then pounced with a triangle attempt that turned smoothly into an armbar for a picture-perfect ending. It marked not only Diaz’s first armbar win in MMA, but Gomi’s first loss via the sub. 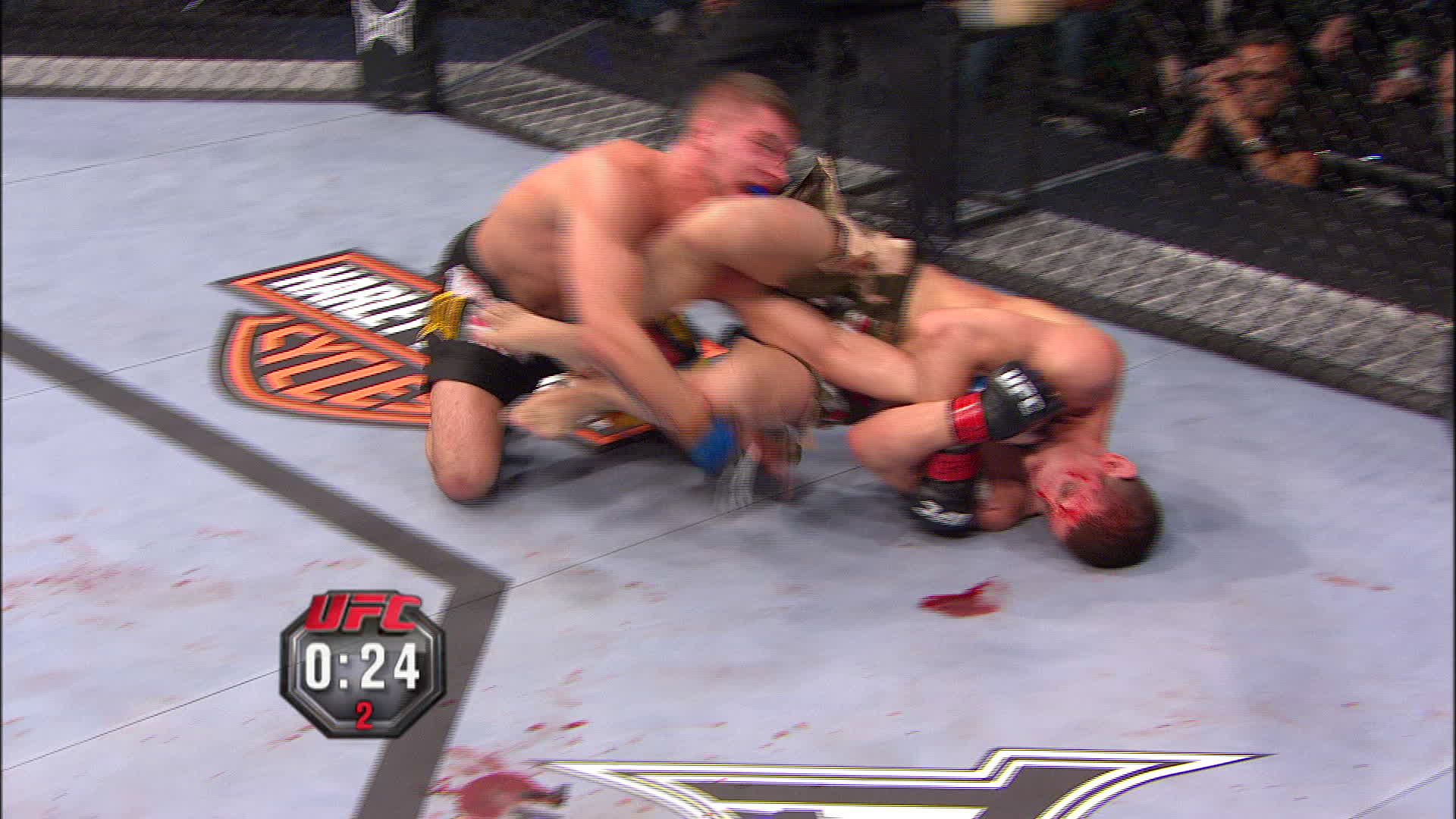 Naturally, the UFC’s resident King of Fight Night bonuses has earned two SOTN awards via armbar. Amidst a ferocious battle with his heavy-handed opponent, Stephens found himself a touch overconfident while ground and pounding. With “J-Lau” seeing blood (his own), Lauzon swept and armbarred Stephens, then readjusted to get “Lil’ Heathen” to tap twice. 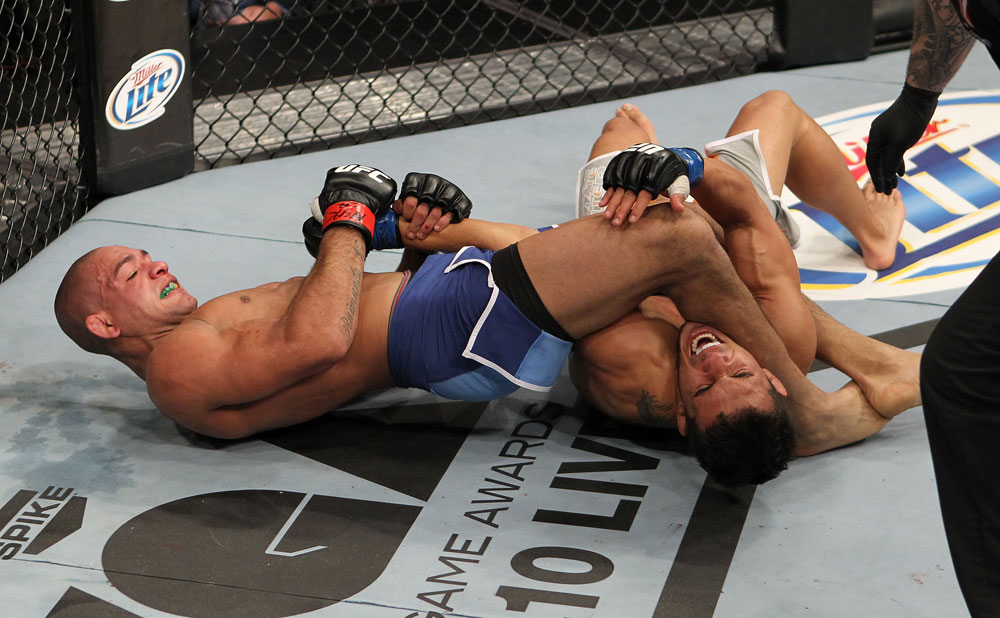 The gentle art is plenty brutal when Diego Brandao is doing it. In an absolutely wild round one between Brandao and Bermudez, both exchanged white-knuckled, vein-popping, fight-ending haymakers and takedown slams. With only seconds remaining, Brandao exploded with an armbar attempt that flipped Bermudez from top position to on his back and tapping. That powerful armbar won Brandao a SOTN bonus, another for FOTN and the TUF 14 featherweight tournament. 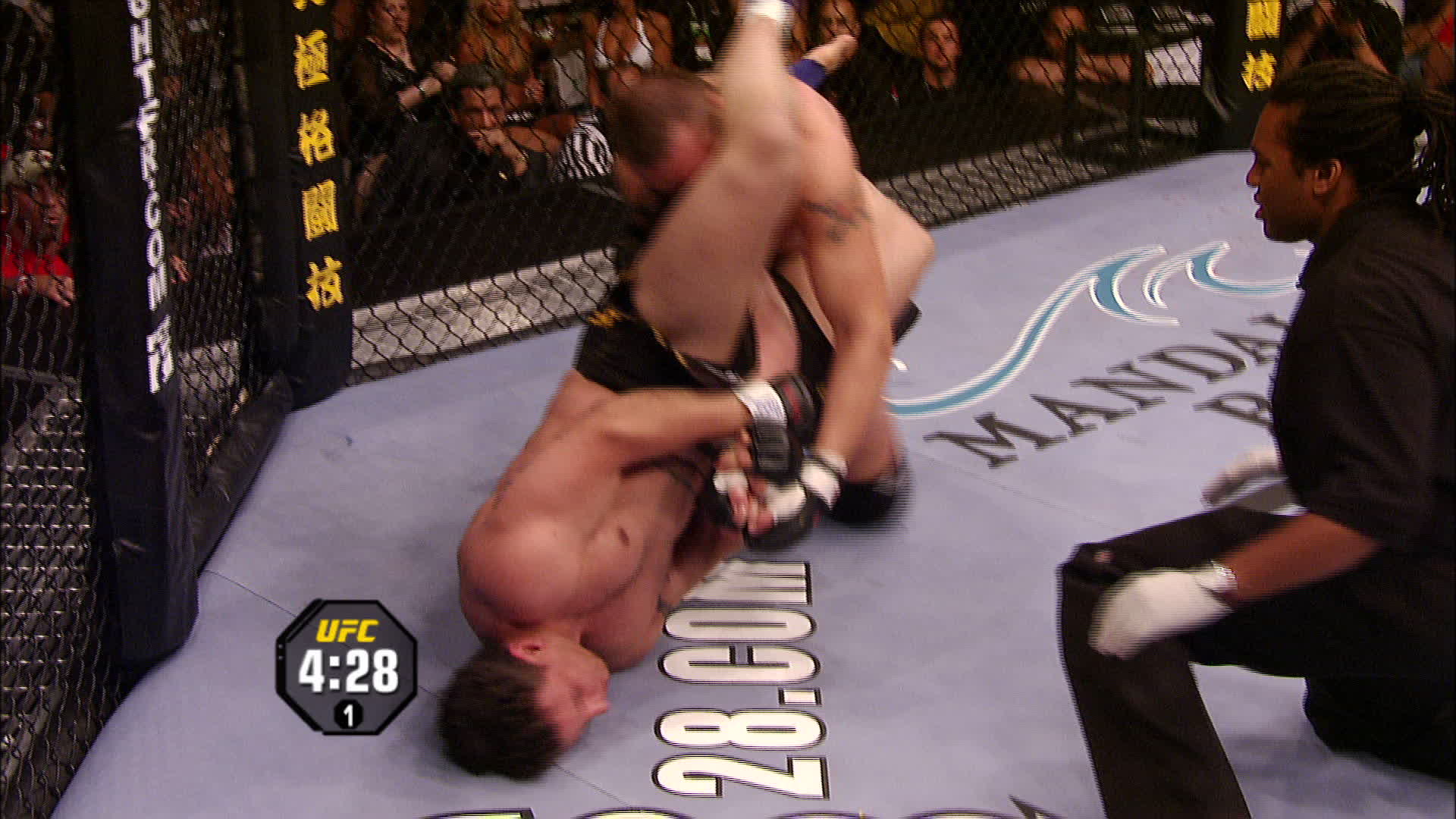 Without a doubt, Frank Mir is the best submission threat the UFC’s heavyweight division has ever known. The former UFC heavyweight champion won his first three fights in the Octagon by submission, but it was his fourth that will forever be replayed in highlight reels: Only 50 seconds into the opening round of Mir’s title fight against Tim Sylvia, Mir positioned for an armbar attempt. Sylvia tried to pull his arm out, which resulted in Mir breaking Sylvia’s radius bone right below the elbow. The move scored Mir his first gold belt from the UFC and a Brazilian jiu-jitsu black belt from famed coach Ricardo Pires. 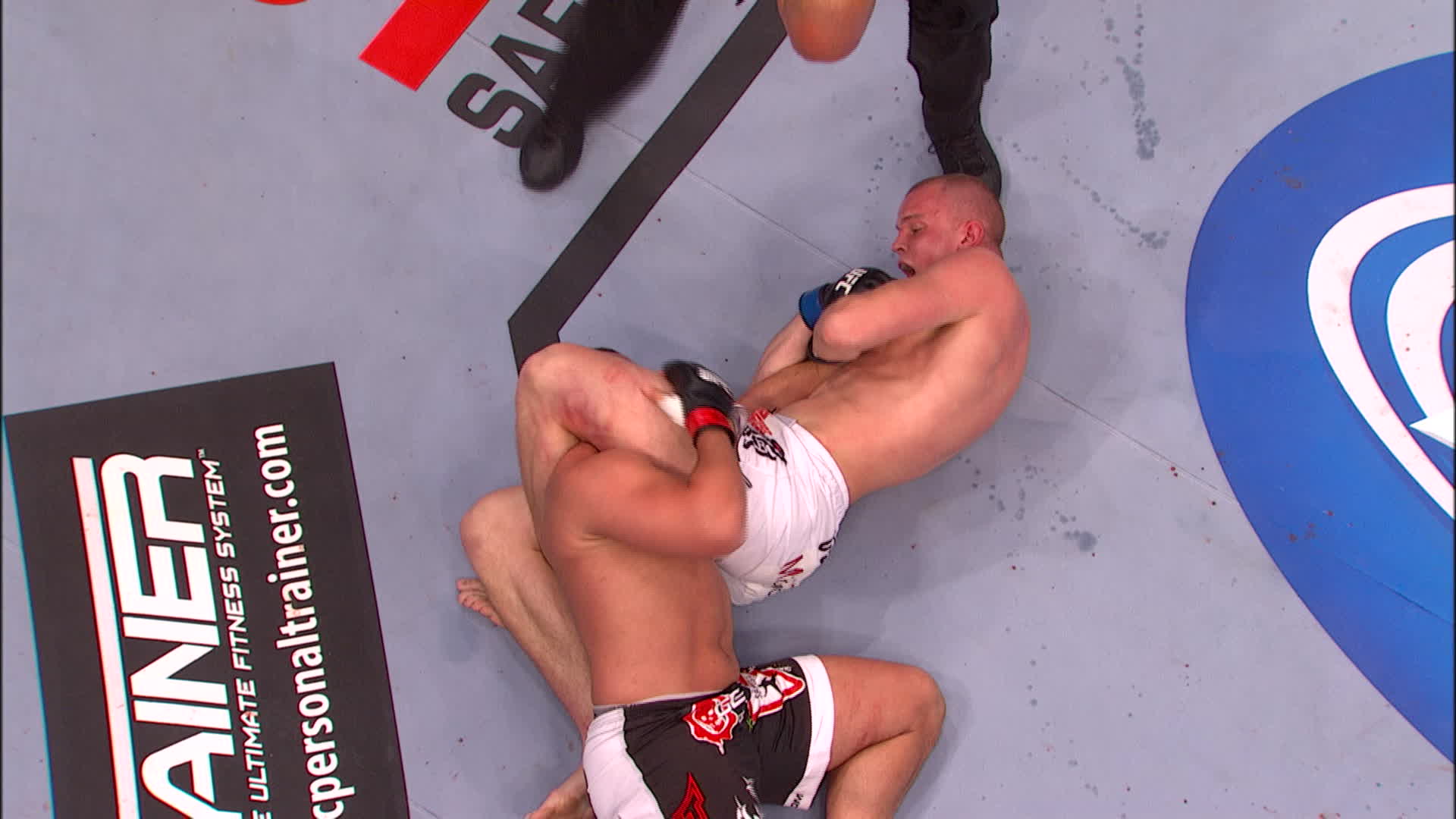 Yes, a 7’ tall MMA fighter has an insane height and reach advantage in the standup, but that frame extraordinaire is a big help on the ground as well. The Dutch “Skyscraper” Stefan Struve has certainly proved as much with four submission victories including a slick, SOTN armbar over knockout artist Pat Barry. Struve’s long legs snatched up the striker's upper body like a Venus Flytrap and -- though Barry tried in vain to slam his way out of danger -- quickly maneuvered him for the sub win.

If you want someone to pass you the torch in the UFC, sometimes you need to shake it out of their hand by attacking the arm; such was the case in the welterweight division between Matt Hughes and Georges St-Pierre. Hughes, the original dominant 170-pound king, showed GSP his place within the division’s ranks with a first-round armbar finish in their title fight in 2004. (Three years later, then-champ GSP returned the favor with an armbar win of his own over Hughes.) 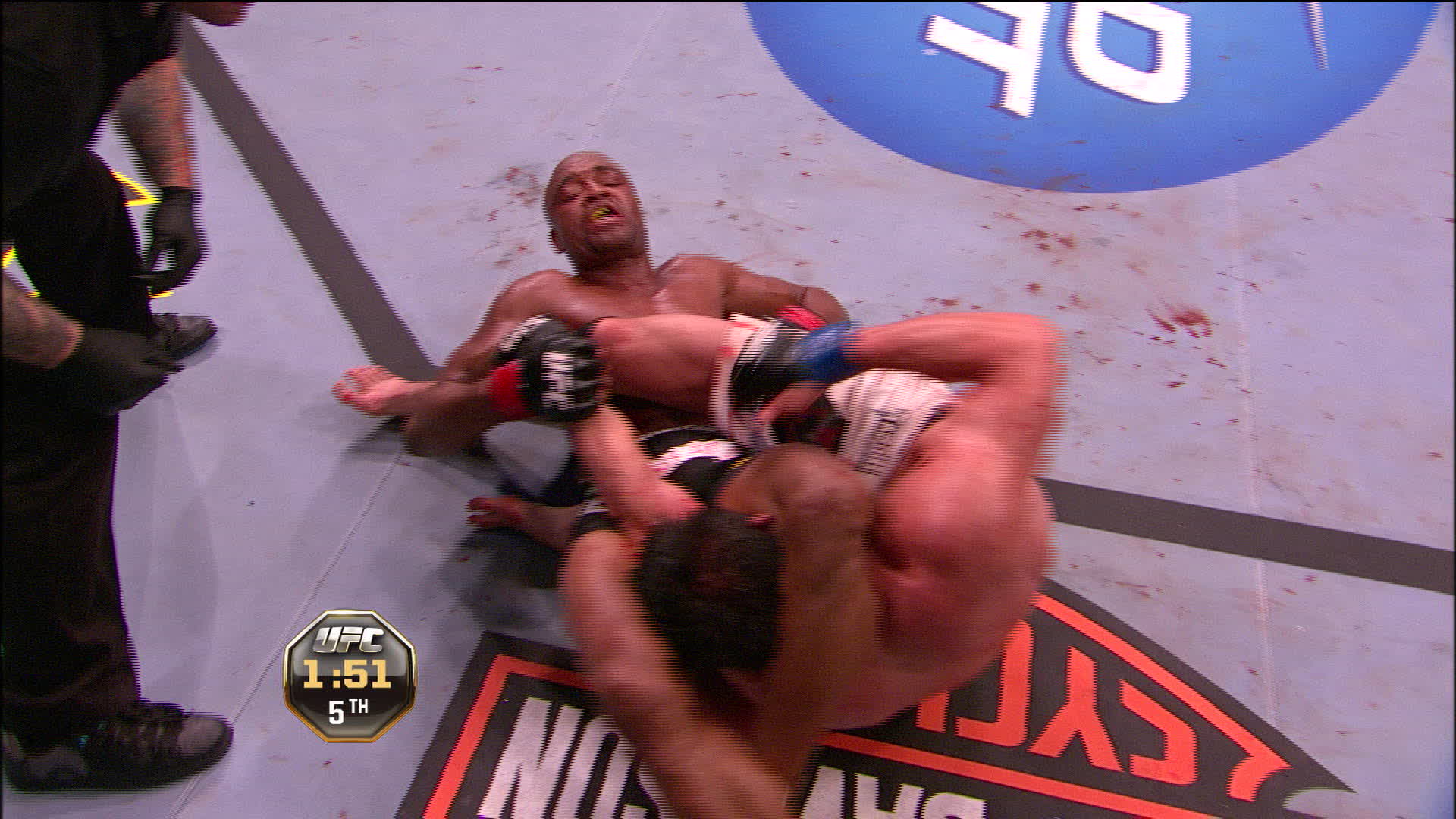 As if getting caught in a triangle choke wasn’t bad enough, some sadistic submission magicians simultaneously attack the prone appendage. Genki Sudo did it to Mike Brown, Paul Sass to Jacob Volkmann, but the best example of the move is Anderson Silva’s on Chael Sonnen. In the final minutes of the fifth frame of their UFC middleweight championship bout, which Sonnen was winning four rounds to none, Silva locked in the double-submission, retaining his belt. (Dustin Poirier did something similar in his win against Max Holloway, but went the extra mile by doing it from top position: After locking in triangle from the bottom,
Poirier rolled over to a mounted triangle, then tugged on Holloway's
trapped limb to get the tap.) 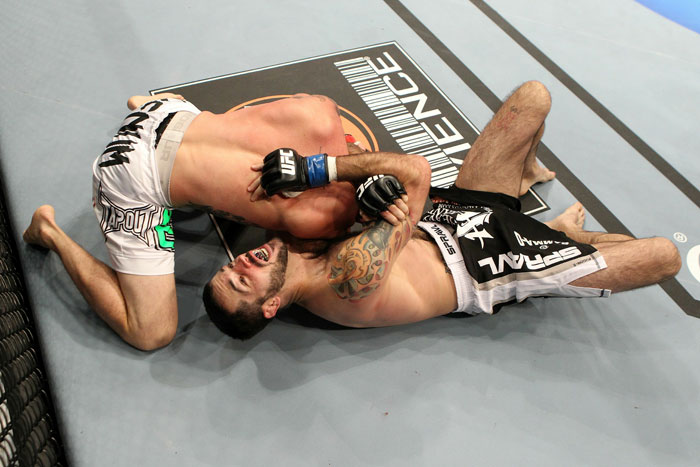 If you thought an armbar was bad, now add the word “reverse." Self-proclaimed “just a boxer”, Chris Lytle was sneakily good on the ground, which was never more evident than in his sub win over Matt Brown. From side control, Lytle snuck his legs up his opponent's side, then quickly stepped over Brown's head with his near leg, then trapped Brown's arm by locking up a reverse triangle with his other leg. With that in place, Lytle attacked Brown's far arm. Like I said, sneaky good. 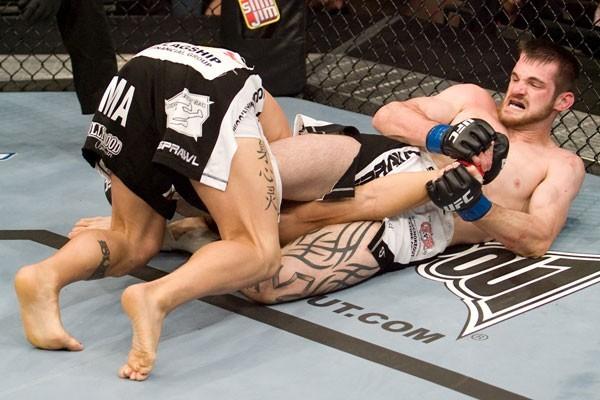 Armbars are like snowflakes, no two are the same -- especially if it's one by former UFC welterweight Dustin Hazelett. The Jorge Gurgel BJJ black belt scored the first of two back-to-back SOTN armbar finishes in 2008 over Josh Burkman. While holding onto Burkman’s arm during a scramble on the ground, Hazelett threw his leg over Burkman’s back into an unforgettable armbar.

1. Royce Gracie on Jason DeLucia at UFC 2 watch fight*
UFC Hall of Famer Royce Gracie won his first 11 UFC fights by submission, which crowned him the winner of 3 of the first 4 UFC tournaments. While Gracie steamrolled the competition at UFC 1 and initially blew everyone’s minds with the martial art of Brazilian jiu-jitsu, it was at UFC 2 that its endless versatility was truly on display. At UFC 1, Gracie took everyone’s back and finished, but, at UFC 2, Gracie showed that no area of the body or appendage was safe from being submitted. 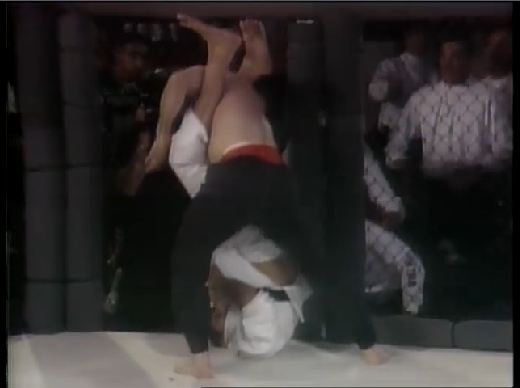 As the UFC has hosted well over a hundred events featuring thousands of
fights, the very first armbar victory inside the Octagon is still as
breathtaking as it was then. The image of the bigger DeLucia trying to escape by standing, and Gracie hanging upside down, latched to his opponent’s arm and wrenching it backwards, is forever etched in all fans’ memories. Since no one back then was expecting the move, the announcers didn’t know what they were seeing and referee “Big” John McCarthy was way out of position. With the top of his head brushing the canvas and his feet up in the air, Gracie redefined the very idea of an offensive position.

*Single fights on UFC.TV are available a la carte or unlimited with a subscription