The 10: Top unranked fighters in the UFC

If you’re at all like me – and since you’re reading a feature written by me on the UFC website, I’m guessing we have some things in common – you’ve probably pondered aloud how a certain fighter isn’t ranked in their respective division a couple hundred times over the last few years.

It happened two weeks ago, when Kevin Lee strolled into the cage to take on Francisco Trinaldo, brandishing a three-fight winning streak and seven wins in his eight appearances since losing a decision to Al Iaquinta in his short-notice debut three years ago.

Of course, wondering about one fighter is often the start of an adventure down the rabbit hole as you trace histories trying to determine how Fighter A is ranked, but Fighter B isn’t, even though the former lost to the latter, like in the case of Lee and TUF: Brazil winner Leo Santos, who is 5-0-1 in the Octagon, but an afterthought in the lightweight rankings and only an honorable mention in this collection of the top unranked talent on the UFC roster.

And no, I won’t be playing games and including the likes of Georges St-Pierre, Nick Diaz and Cris Cyborg in this squad, even though all three cannot currently be found in the rankings for one reason or another.

This is The 10: The Top Unranked Talent in the UFC.

(Note: these are in order of division, not a hierarchy) 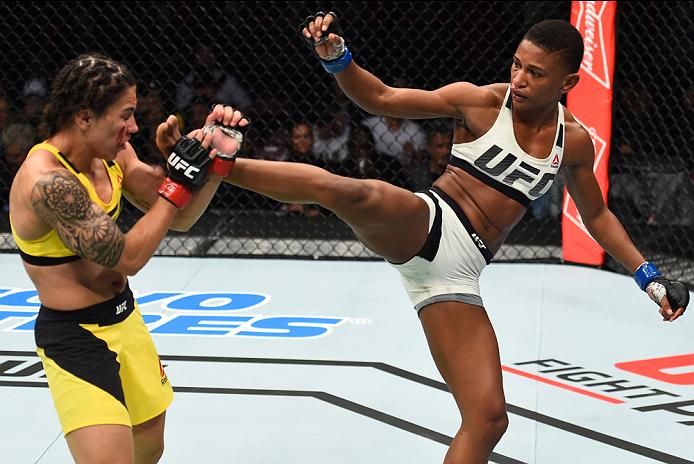 Angela Hill
Sometimes people let results and records carry too much weight in their assessment of fighters and Hill being unranked in the strawweight division is one of those instances.

Though she’s just 1-3 in the Octgaon, Hill’s first two losses came against Top 5 opponents in the third and fourth fights of her MMA career, while her most recent setback was a gutsy decision loss to the woman scheduled to challenge for the strawweight title at UFC 211, Jessica Andrade. In between, “Overkill” won four straight, claiming gold under the Invicta FC banner and successfully defending it once before being called back up to the big leagues.

Given the quality of competition she’s faced, the former TUF 20 contestant should be counted amongst the 15 best fighters in the women’s 115-pound division.

Lauren Murphy
Another fighter with a 1-3 mark in the Octagon and a championship history with Invicta FC, Murphy could make a case for being 4-0 in the UFC without too much effort as each of her three losses have come in nail-biters that went down to the wire with Sara McMann, Liz Carmouche and Katlyn Chookagian.

In each of those fights, every judge turned in a 29-28 scorecard, which means that a different point of view here or a focus on damage over position there and the 2-1 tallies that fell against the gritty Alaskan could have gone the other way. If they did, Murphy’s standing in the women’s bantamweight ranks is entirely different.

As it stands, she’s on the outside of the Top 15 looking in, but remains a nightmare matchup for just about anybody and someone capable of cracking the rankings at any time.

Magomed Bibulatov
While I didn’t spike the list by adding GSP, Diaz and Cyborg into the group, the addition of Bibulatov is a little dicey since the 28-year-old flyweight hasn’t actually competed in the UFC yet.

But here’s the thing: I watch a lot of fights and I assure you that Bibulatov is one of the 15 best flyweights on the roster. Trust me on this one.

The former World Series of Fighting champ makes his debut at UFC 210 in Buffalo against Jenel Lausa and while it’s not the kind of big name matchup that is going to make anyone immediately sit up and take notice, a win for Bibulatov will push him to 14-0 overall and, given the wide open nature of the flyweight division, it shouldn’t take too long for “Gladiator” to make good on my decision to include him on this list. 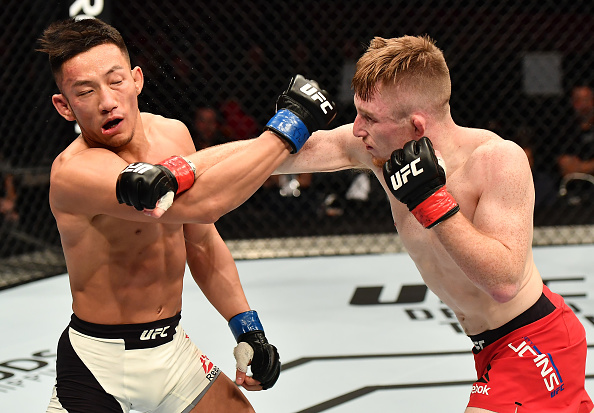 Brett Johns
The first Welshman to get a win in the UFC, Johns has a perfect 13-0 record and a lengthy future as a contender in the bantamweight division in front of him; he just hasn’t gotten the chance to prove the latter as of yet.

Scheduled to compete last weekend in London, the former Titan FC titleholder was scratched from the card early Saturday morning due to his opponent Ian Entwistle being declared unfit to compete after missing weight. The bout against the leg lock specialist was meant to be the 25-year-old’s sophomore appearance, but with those plans dashed, hopefully the UFC gets him back onto a fight card again in the near future.

With good size for the division and a strong grappling-based approach, “The Pikey” could be a player in the bantamweight ranks in the near future.

Andre Fili
The Team Alpha Male talent is a victim of there being too much damn talent in the featherweight division because after showing up on short notice and dominating Hacran Dias – who was ranked No. 11 at the time – Fili should probably be included in the Top 15, but who are you going to kick out?

One of the other issues working against Fili is the “what have you done for me lately” nature of the rankings, where recent performance tends to outweigh overall merit when votes are being cast.

That being said, a return to action against an established foe and another good win should give the 26-year-old who fights for his fellow “outcasts and underdogs” a shot at breaking into the rankings.

Will Brooks
In truth, I probably could have built this entire list from fighters in the lightweight division because that’s how stacked the 155-pound ranks are these days.

Brooks is one of a handful of guys knocking on the door, having just recently been bounced from the rankings as others have competed and won more recently. After popping a rib and losing to Alex Oliveira back in the fall, “Ill Will” returns to action next month in Buffalo against Charles Oliveira in a tough fight that will again serve as a litmus test for the American Top Team standout.

If he can turn in a dominant effort against the always game “Do Bronx,” the UFC newcomer could find his way back into the Top 15, unless one of the other lightweights below beat him to it.

Rustam Khabilov
A couple years back, Khabilov was stationed inside the Top 10 and had people wondering if he was going to follow the path to the top blazed by Khabib Nurmagomedov.

He fought once in 2014 and once in 2015, losing both contests, which shuffled him into the shadows in the highly competitive division, but last year, Khabilov returned to making regular appearances in the Octagon and collected four victories, leaving him alongside Brooks on the doorstep of the Top 15.

I would say that another win or two would guarantee him a place in the rankings, but Francisco Trinaldo needed seven consecutive victories to sneak into the lower third of the list, so who knows? What I do know is that it wouldn’t surprise me to see Khabilov manhandle a couple more lightweights in 2017 and leave people wondering, “Why did we forget about him?” 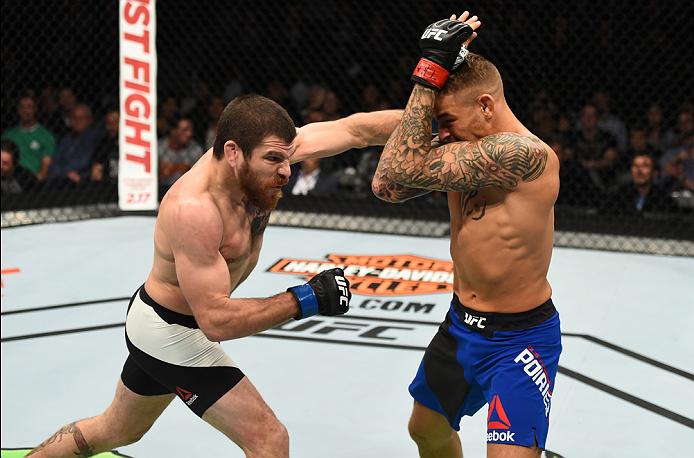 Jim Miller
If I’m being completely honest, I find the fact that Miller isn’t ranked at lightweight laughable.

Here’s a guy who has been in the UFC for nearly nine years and fought one of the toughest schedules you’re ever going to see, and while he’s come out on the wrong side of the results a bunch of times, the totality of his resume should make it abundantly clear that he’s one of the best 155-pound fighters in the world.

The funny thing is that even if Miller doesn’t get the “lifetime achievement” look, his 2016 campaign ended with a three-fight winning streak and he just turned in a gutsy effort in defeat against Dustin Poirier, who currently sits at No. 9 in the division.

Alex Oliveira
The Brazilian “Cowboy” is a tough case because he’s bounced around between lightweight and welterweight throughout his UFC run and having no fixed address makes it hard to slot him into the rankings.

That being said, he seems to have made welterweight his home going forward, he’s 6-2 with one no contest in nine UFC appearances, and outside of losing his short-notice debut, the only guy to beat him is the original “Cowboy,” Donald Cerrone.

Oliveira looked terrific against Tim Means a couple weekends ago in Brazil and has the potential to become a factor in the welterweight division going forward. With the lower third of the rankings in a state of flux, the right matchup and a strong performance could see the Top 15 counting another “Cowboy” in its midst before too long.

Dan Kelly
With a 6-1 record in the UFC and four straight victories, I’m not sure what else Kelly needs to do to earn a place in the Top 15.

There is nothing flashy about the four-time Olympian’s approach in the cage and that’s being generous, but it’s hard to argue with his results and, at the end of the day, the rankings should be a reflection of performance, not popularity or anything else and Kelly’s had nothing but positive results of late.

Here’s a question: if Rashad Evans had beaten everyone’s favorite Aussie with a dad bod at UFC 209, would the former light heavyweight champion have snuck his way into the Top 15 at middleweight?

My guess is that he would have and that makes Kelly’s exclusion all the more disappointing.