Dagestan’s Rashid Magomedov made it ten consecutive wins in his UFC Fight Night prelim bout against Rodrigo Damm, putting together a shutout three round decision win Saturday at the Ginásio do Ibirapuera in Sao Paulo, Brazil.

Magomedov controlled the pace and location of the fight for the entire first round, coolly picking away at the Brazilian Jiu-Jitsu black belt and even dropping him with a right hand with 45 seconds left in the frame.

Damm’s fortunes didn’t change much in the second, but at least the Brazilian veteran opened up a bit with his striking and a late round takedown attempt, but neither deterred the American Top Team fighter in the slightest.

With one round left, Damm sought the takedown more aggressively but was unable to get Magomedov to the mat, so he relied on his striking to get the job done and was able to land some hard shots. Magomedov returned fire as well, leading to some of the best action of the fight as the bout closed.

In a meeting of unbeaten lightweights, Sao Paulo’s Elias Silverio left the Octagon with his “0” intact, submitting Orange County’s Ernest Chavez in third round.

Chavez’ lateral movement gave Silverio fits for much of the first round, but as soon as Silverio was 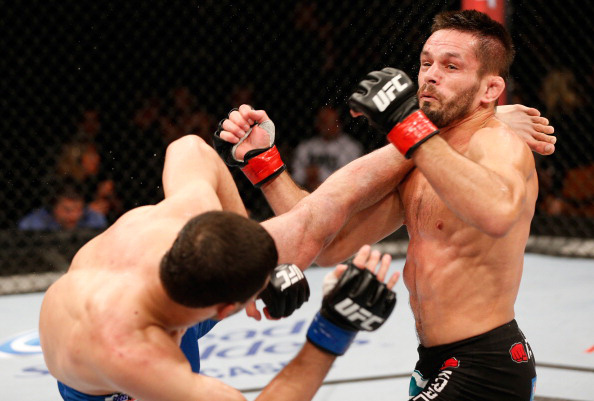 able to find his range with his kicks to the legs and body, the Californian slowed down a bit, allowing the Brazilian to put some points on the board.

The pattern established late in the first continued in the second, with a tiring Chavez slowly getting picked apart from a distance. The unbeaten Chavez did rally late, at least until a few body shots put him in trouble and forced him to defend until the horn.

With fatigue playing an even greater role for Chavez in the final round, the last thing he needed was an accidental kick to the groin, but after a brief break, he got back after it, trying to close the distance on Silverio, who had confidently found his rhythm.  Yet no one probably expected the Brazilian to turn it on in the final minute, take Chavez’ back and submit him with a rear naked choke. But that’s just what he did, earning the win at the 4:21 mark.

Following the explosive action of the previous prelim bouts, the first round of this matchup paled in comparison, with Umalatov controlling matters and keeping Thiago from getting on track.

Thiago tried to get more aggressive as round two opened, but a hard left hurt the Brazilian and had him looking for a takedown. Umalatov defended well and avoided trouble, and Thiago was obviously frustrated. The Brasilia native did get on the board late with a takedown and some hard right hands, giving him something to build on for the final five minutes.

With the first two rounds likely in the books, Umalatov opted for a ‘if it ain’t broke, don’t fix it’ strategy in the final frame, and with Thiago willing but unable to pull the trigger on a consistent offensive attack, the final verdict was an easy one to figure out as Umalatov earned his first Octagon victory.

Featherweight prospects Kevin Souza and Mark Eddiva gave the Sao Paulo fans an action-packed show, with Florianopolis’ Souza improving to 18-3 with a second round TKO win that removed Baguio City’s Eddiva from the ranks of the unbeaten.

Both fighters were busy with their strikes as the fight began, with Eddiva (6-1) dropping Souza early, prompting a change of scenery to the mat. Souza looked for a submission from his back as Eddiva worked his ground strikes, but he soon found an opportunity to stand, and while on his feet he was able to rock the Filipino battler and drop him briefly with a right hand. But as soon as Eddiva got up, a wild slugfest broke out, with both fighters abandoning defense as they swung for the fences. And while Souza got the better of the exchanges, he went back to his corner at the horn with a cut on his forehead.

As the fight settled into a less frantic pace in round two, Eddiva began to pick his shots better and more often, his kicks being particularly effective. Souza was still dangerous though, and in the final minute he began to drill Eddiva more often, putting him in a defensive mode, and after a series of unanswered strikes, referee Herb Dean intervened, stopping the fight at 4:52 of the second.

In a clash of Team Wanderlei middleweights, Ricardo Abreu finished Wagner Silva via submission in the second round. 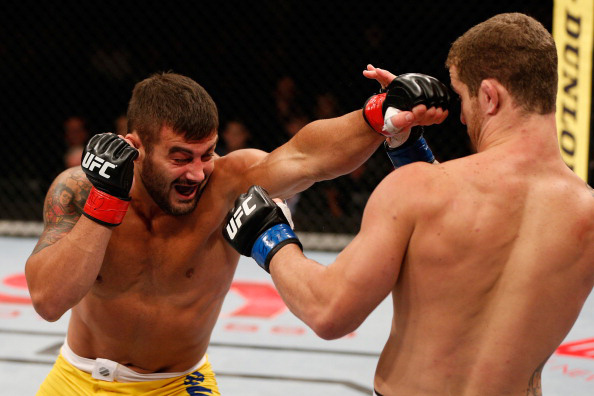 The right hand was Abreu’s weapon of choice from the start, and after nailing Silva a couple times with it, he knocked the Rio de Janeiro product down in the second minute. Silva recovered and got back up, and Abreu kept looking for the right hand finisher. Silva had picked up on his foe’s strategy by now, and he began putting his own offense together as Abreu largely swung and missed for the rest of the round.

Abreu started fast again in round two, but this time, after tagging his opponent and getting him to the ground, the Brazilian Jiu-Jitsu black belt closed the show with a rear naked choke that forced Silva to tap out at 1:06 of the round.

It was a quick and decisive win for Marcos Rogerio de Lima, as he knocked out Richardson Moreira 20 seconds into a heavyweight clash between TUF Brazil 3 competitors.

A straight right by Team Sonnen’s de Lima spun Moreira around and down after an early clinch, and though Team Wanderlei’s Moreira attempted to recover, it was not to be, as referee Wernei Cardoso wisely stepped in to stop the fight

Sao Paulo bantamweight Pedro Munhoz got the night off to a great start for the Brazilian fans, 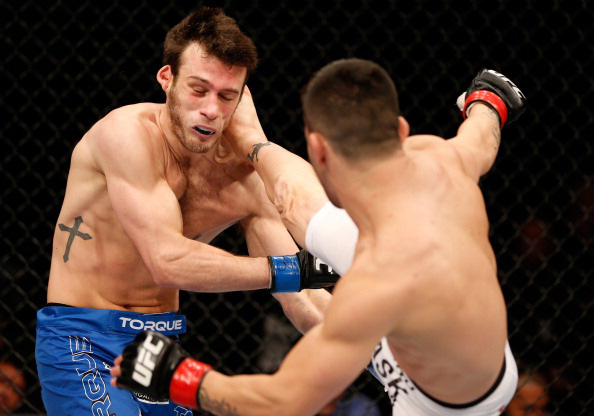 spoiling the debut of Matt Hobar with a first round knockout.

After some competitive back and forth stand-up action to kick off the bout, a right kick to the head by Munhoz spelled the beginning of the end for the Dallas newcomer. A guillotine choke attempt followed, and it looked like Hobar would survive after getting loose, but Munhoz hurt his opponent again with a straight right, and after taking Hobar down, ground strikes prompted referee Mario Yamasaki to stop the fight at the 2:47 mark.