The 10: Rousey's Return Kicks off August 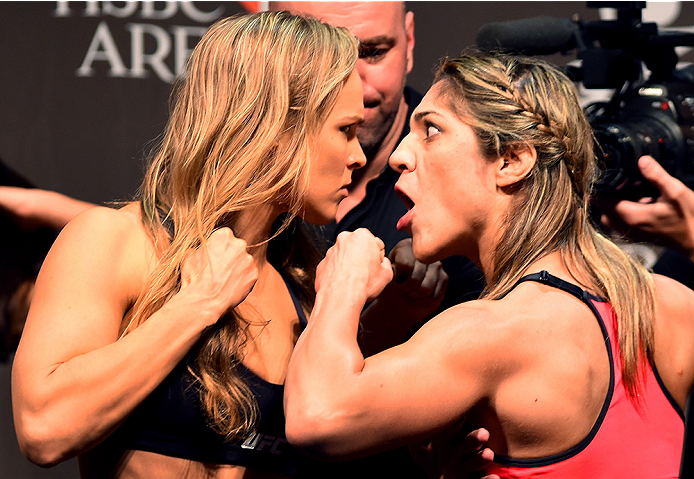 After last month’s run of four events in one week (and five events in total), it feels strange having only three events to pull from in creating this month’s edition of The 10.

That being said, the August calendar may not be as robust as July’s wide assortment of offerings, but there are several critical and compelling matchups that will hit the cage over the next month, so read on and get excited about the best of the 31 days ahead inside the Octagon.

Magny enters the toughest matchup of his career on a two-year, seven-fight winning streak that includes consecutive Performance of the Night bonuses for his finishes of Kiichi Kunimoto and Hyun Gyu Lim. The former Ultimate Fighter contestant has shown continuous improvements as he’s climbed the welterweight ladder, and posting an eighth straight win would move him into fifth place on the list of longest winning streaks in UFC history.

Once a middleweight title challenger, Maia hit a two-fight skid on his way up the 170-pound rankings, but has rebounded from back-to-back losses to post back-to-back wins over Alexander Yakovlev and Ryan LaFlare in efforts that saw the submission specialist return to his grappling roots. Now 5-2 since changing divisions, halting Magny’s run of success could put Maia in line for a matchup with a Top 5 opponent next time out.

With strawweight champion Joanna Jedrzejczyk recovering from thumb surgery, these two females could be fighting for the opportunity to face the Polish kickboxer for her title later this year.

Gadelha hasn’t fought since losing a close split decision to the current champion last December. She was scheduled to compete against Aisling Daly in April, but a back injury forced her to withdraw. Aguilar, meanwhile, will be making her long-awaited UFC debut, bringing with her a 19-4 record that includes wins over current UFC fighters Lisa Ellis, Angela Magana and Carla Esparza, as well as a pair of victories over Japanese superstar Megumi Fujii.

No one else in the division appears ready to challenge for the title, leaving the door wide open for the winner of this one to fight for the belt. One punch seemed to swing the results in Gadelha’s fight with Jedrzejczyk and if she can make Aguilar’s debut a forgettable one, she could secure a rematch. Conversely, if “Jag” can outwork the Brazilian standout, she may be fighting for UFC gold in her sophomore appearance.

Correia earned her shot at the strap by knocking off Julie Kedzie, Jessamyn Duke and Shayna Baszler, the latter two members of MMA’s “Four Horsewomen” alongside Rousey and her long-time training partner and close friend Marina Shafir. Following her win over Baszler last August, Correia extended the challenge and Rousey was more than happy to accept.

She even asked for the fight to be in the challenger’s backyard.

Rousey has been operating on a different level than everyone else in the division as of late, needing just 96 seconds combined to win her last three fights. Annoyed by Correia’s taunts and angered about some of the things the unbeaten Brazilian has said in the preamble to this fight, Rousey has promised to draw this one out and punish Correia for stepping into the Octagon with her.

Sounds like a fight you don’t want to miss.

Lightweight is very likely the deepest, most talented division in the UFC and a fight like this only highlights that fact even more.

Currently stationed at No. 5 in the rankings, Johnson has rolled off four straight victories to stand on the cusp of being a title contender. After a pair of losses halted his first prolonged run of success after he reached the finals on Season 12 of The Ultimate Fighter, “The Menace” has found his rhythm and an approach in the cage that works for him every time to stack up wins over divisional staples like Joe Lauzon, Gleison Tibau and Edson Barboza.

In less than two years, Dariush has gone from debuting in the organization to the brink of cracking the Top 10, carrying a four-fight win streak of his own into this co-main event matchup with Johnson. After earning a Performance of the Night bonus for his slick submission win over Daron Cruickshank, the Kings MMA product jumped back into the cage quickly to defeat Jim Miller a month later.

With Donald Cerrone in line for the next title shot, the winner of this one could find himself matched up with anyone from the returning Khabib Nurmagomedov or Eddie Alvarez to former champ Anthony Pettis or the surging Tony Ferguson. The 155-pound ranks are stacked and so much fun.

Last April, Teixeira carried an eight-year, 20-fight winning streak into a championship showdown with Jon Jones at UFC 172 in Baltimore, Maryland. Now, the Brazilian is looking to halt a two-fight losing skid and avoid falling out of the Top 5 as he serves as the next litmus test for Saint Preux.

After a tepid performance in his last appearance, Teixeira needs to return to being the ferocious, aggressive boxer that earned stoppage wins over Fabio Maldonado and Ryan Bader en route to challenging for the title. As well rounded as anyone in the division, preparation is key for the 35-year-old Connecticut resident and if he’s not locked in heading into this one, a third straight defeat could be headed his way.

Saint Preux has been on a steady climb up the divisional ladder since arriving in Strikeforce five years ago. Boasting an 11-2 record over that time, the Knoxville MMA representative has used his natural athleticism to create an unpredictable style that has produced wins over Gian Villante, Patrick Cummins and Shogun Rua. Still developing by significant amounts between each fight, “OSP” is one of the most intriguing new contenders in the light heavyweight ranks and a win over the former title challenger Teixeira should move him closer to earning a place in the upper tier of the division.

While not the biggest names in the strawweight division, the main card opener for the UFC’s debut event in Saskatoon will elevate one of these two into position as a potential contender going forward.

Moroz debuted in April with a quick submission win over Joanne Calderwood before hopping onto the top of the cage and talking junk at new champion Joanna Jedrzejczyk, on the champion’s home turf no less. It’s that kind of confidence coupled with a perfect 6-0 record (all finishes) that make the 23-year-old Ukrainian someone to watch going forward.

After picking up a split decision win over Elizabeth Phillips in her promotional debut, Letourneau dropped to strawweight and outboxed former professional boxer Jessica Rakoczy to push her record to 2-0 in the Octagon and extend her winning streak to three. “Trouble” has only ever lost to elite competition and if she’s able to hand Moroz her first career defeat, the Montreal native and American Top Team representative should find herself in the thick of the chase in the 115-pound weight class.

Here’s another example of how loaded the lightweight division is these days.

Aubin-Mercier is 6-1, riding a tidy two-fight winning streak (both finishes) and stands out as one of the top up-and-coming talents in Canada. Tony Sims is making his second start on short notice in the UFC, this time replacing the injured Chris Wade, and after his impressive knockout of Steve Montgomery in his Octagon debut, expectations are high for the Coloradan.

In any other division, these two emerging competitors might get a couple more bouts before landing in a battle of prospects like this, but given that there is an abundance of talent in the 155-pound weight class, Saskatoon gets another outstanding fight that should establish the winner as one of the top lightweight names to watch over the next year.

While Aubin-Mercier and Sims fight to see which won move ahead in the prospect rankings, Laprise and Trinaldo do battle to break into the crowded Top 25 in the same stacked lightweight division.

TUF Nations winner Laprise earned a hard-fought unanimous decision win (and Fight of the Night bonus) back in April, edging Bryan Barberena to extend his record to 11-0. The pride of Chatham, Ontario has made the move to Montreal and has shown the all-around repertoire to be a tough out for anyone in the division.

Trinaldo has put together a three-fight winning streak heading into this one, most recently coming out on the positive side of a split decision opposite Norman Parke. “Massaranduba” is a massive lightweight, an experienced veteran and a legit threat wherever the fight takes place, making him an ideal step up in competition for the unbeaten Canadian at this point in his career.

Originally scheduled for the TUF 21 Finale in Hollywood, Florida, Visa issues for Silva pushed the contest to Canada, but regardless of where it’s taking place, these two talented welterweights are sure to put on a show.

Story is coming off an upset win over Gunnar Nelson last October in Stockholm and sits at No. 10 in the rankings. The sturdy veteran was the first man to beat Johny Hendricks and has gone toe-to-toe with some of the top contenders the division has to offer. If he can add a third straight win to his resume, the Washington State standout could find himself in a high profile fight to close out the year.

Silva has been an enigma during his time in the UFC, collecting six bonuses and turning in some thrilling performances while struggling to find consistent results inside the Octagon, coming up short in key positions on a couple different occasions. Finally entering the cage on a winning streak, the talented Brazilian could vault to new heights in the divisional hierarchy by knocking off Story.

Surging featherweights with their eyes on a future title shot collide in the main event of the UFC’s first appearance in Saskatchewan.

Since losing to Conor McGregor two years ago, Holloway has put together a six-fight winning streak, elevating himself into the Top 5 with a third-round submission win over Cub Swanson back in April. The talented young Hawaiian has a diverse offensive arsenal and fights with a veteran savvy that belies his age.

Oliveira, meanwhile, has scored five performance bonuses during his current four-fight run of success, including a pair of checks for his third-round submission win over Nik Lentz back in May. “Do Bronx” has always been an exciting, all-action fighter, but he’s shown an improved Fight IQ during this impressive run and it has made him more dangerous.

While a title shot may not await the winner – Jose Aldo and Conor McGregor have some business to settle first – whoever does emerge from the prairies with their winning streak intact should be in a position to make up one half of a potential title eliminator either late this year or early next year.