The 10: Rematches You Have to Watch Again

The memories of their first fight and the tension that frequently still exists between the combatants creates a heightened sense of anticipation as the days count down until the two competitors step back inside the UFC Octagon and do it again, with fans, fighters and observers alike sitting on the edge of their seats while they wait to see how things will be different the second time around, if they’re different at all.

And unlike in Hollywood, the sequel is often as good or better than the original.

With Tyron Woodley and Stephen Thompson poised to run back their welterweight championship battle from late last year at UFC 209 on Mar. 4 in Las Vegas, the time is right to run down a list of the best rematches to occupy the Octagon over the years.

Note: We’re not talking anticipation; we’re talking about the actual action that transpired in the rematch.

This is The 10: Rematches You Have to Watch Again

This might be the best fight in the history of the sport that didn’t make it out of the first round. With all due respect to the various sub-five-minute firefights we’ve seen over the years, none of them had the drama and massive shift in momentum this fight featured, and very seldom has there been a championship belt on the line.

There is a reason this was a fight selected for enshrinement in the UFC Hall of Fame.

An uncalled accidental low blow gave Trigg an opening and the challenger capitalized, taking the fight to the welterweight champion. Looking to sink in a rear-naked choke, Trigg appeared to be on the brink of unseating Hughes from atop the division, but the Pat Miletich product wasn’t done fighting. He broke free, picked up Trigg on his shoulder and carried him across the cage, slamming him to the canvas with force before sinking in a choke of his own to secure the finish.

The highlight remains a staple of the UFC’s pre-main card montage and this remains Dana White’s favorite fight of all-time.

The first bout between these two came together on short notice, with Fisher stepping in late to replace Kenny Florian before dropping a split decision to the Shawn Tompkins disciple in an entertaining scrap.

A year and change later, they ran it back for a second time with both men getting the benefit of a full camp, and the result was one of the most entertaining rematches in UFC history. While neither Fisher nor Stout ever put together a long enough winning streak to get into title contention, both were consummate gamers who gave it everything they had every time they stepped into the Octagon, and their battles with each other were emblematic of their tenacity, toughness and passion for the sport.

Five years after their second clash, they would have a rubber match, with Stout getting the unanimous decision win in what would be the last fight of Fisher’s career.

The Fight of the Year of 2011 was decided on Jan. 1, as Edgar and Maynard went head-to-head for 25 minutes with the lightweight title hanging in the balance, only to have the bout end in a draw, necessitating a trilogy fight between the two men who are now inextricably linked.

Unlike several bouts on this list, the initial encounter between these two didn’t leave people clamoring for a second encounter and the contest only came together after Edgar ascended to the top of the division and Maynard kept rattling off wins to establish himself as the undisputed No. 1 contender.

While it may not have been anticipated, the bout was electric, with “The Bully” coming as close to finishing Edgar in the opening round as you can get without the bout actually ending. Somehow, “The Answer” came out fresh for the second and an instant classic ensued.

The scores ended split and even – 48-46 each way with 47-47 in the middle – necessitating a third meeting between the two. That one took place 10 months later at UFC 136 and to no one’s surprise, Edgar and Maynard delivered another gem, with the champion once again weathering an early storm before rallying to stop Maynard and retain the title.

Two of the biggest names to matriculate to the UFC from the WEC, Cruz and Faber were also heated rivals, and a second meeting between the two seemed like a fitting stage for the first bantamweight championship fight in the company’s history.

Faber had handed Cruz his first and only defeat four years earlier, forcing him to tap to a mounted guillotine choke 98 seconds into their featherweight title fight at WEC 26. While “The California Kid” was at the height of his dominance at the time, Cruz was still figuring out who he was as a fighter. Two fights later, he would move to bantamweight and begin a run of (clears throat) dominance that lasted until the second-to-last UFC fight of last year.

The tension between the two were running high when they hit the Octagon together and the clash played out like the chess match everyone expected, with Cruz using his stick-and-move staccato to pick at Faber, while the Team Alpha Male leader countered with his patented combination of speed and power from in the pocket.

All three judges turned in different scores, but all three saw the bout in favor of Cruz, bringing their personal series level at one win each. Five years later, they finally stepped into the Octagon for their rubber match, with Cruz retaining the bantamweight title with a unanimous decision win at UFC 199.

Three years earlier, Mir claimed the interim heavyweight title from “Big Nog” by becoming the first man to stop the Brazilian legend in a bout that set up his iconic UFC 100 rematch with Brock Lesnar.

When they met for a second time on a frosty December night in Toronto, both men were angling to re-enter the title conversation and Mir once again made history, becoming the first man to force Nogueira to submit.

The finishing sequence actually started with Nogueira putting Mir on rubber legs after landing a crisp right hand to the jaw that sent Mir searching for a takedown to no avail. Nogueira looked to lock up a guillotine, but Mir escaped to top position, attacking a kimura from side control. They tandem rolled as Nogueira tried to defend, but Mir never broke his grip and eventually, he broke the former PRIDE standout’s arm.

Not only was this one of the most exciting rematches in UFC history, but it was also one of the top comebacks to take place in the Octagon as well.

This was a perfect storm of anticipation, early action and a sublime ending all rolled into one. 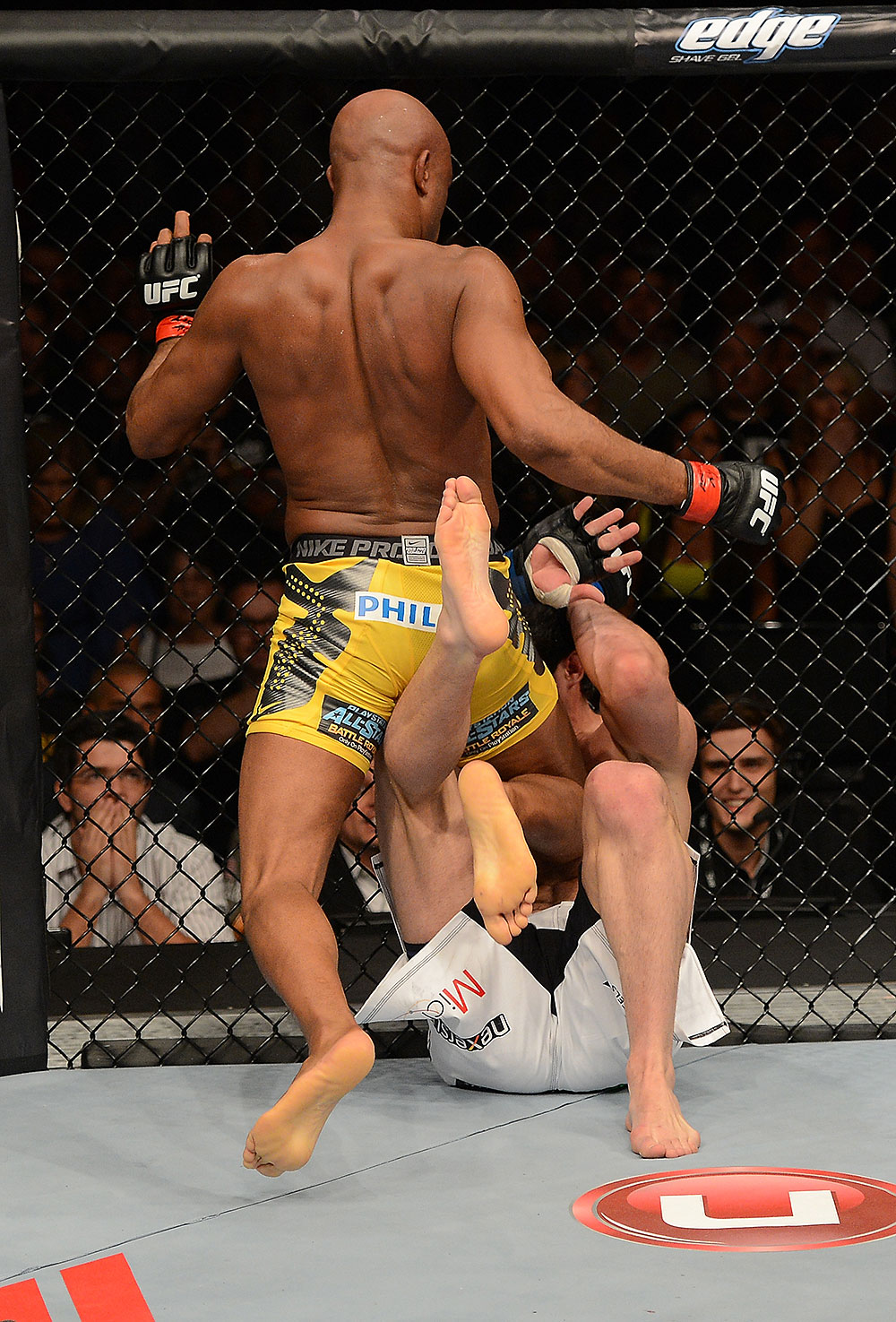 Sonnen didn’t let his last-minute loss to Silva in their first encounter dissuade him from unleashing another verbal assault on the long-reigning middleweight champion in advance of this one, and when he took the fight to the canvas early in the first, many wondered if “The Gangster from West Linn” was going to be able to finish what he started at UFC 117.

Early in the second, Silva slammed the door closed on any possibility of that happening. When Sonnen slipped following an out-of-character spinning backfist attempt, “The Spider” attacked, burying a knee into his midsection before putting Sonnen away with a flurry along the fence.

Over the course of five rounds at UFC 139, Henderson and Rua left every ounce of themselves inside the Octagon, combining to deliver one of the most entertaining back-and-forth battles to ever grace the UFC cage. A couple years later, with both men looking to ignite one last run towards the top of the light heavyweight division, they shared the Octagon for a second time and the results were no less exciting.

While it wasn’t as epic as their initial encounter, this one still took home Fight of the Night honors, with Rua looking poised to level the series at one before Henderson leveled him with an H-Bomb early in the third round.

Each man experienced a tremendous amount of success throughout their illustrious careers, but their most exhilarating moments inside the Octagon came when they shared the cage together.

A cheeky fence-grab and a flattening knee to the dome highlighted their first encounter, but the rematch between the featherweight champion and the perennial contender was free of controversy and simply spectacular.

After collecting five straight wins to earn a second crack at the Brazilian titleholder, the Team Alpha Male standout gave Aldo his toughest test to date in the UFC, forcing the featherweight standout to dig deep like no one had before him. To his credit, Aldo took everything Mendes had to offer and returned fire every time, showing his championship mettle en route to winning a unanimous decision in what remains the best featherweight title fight in UFC history. 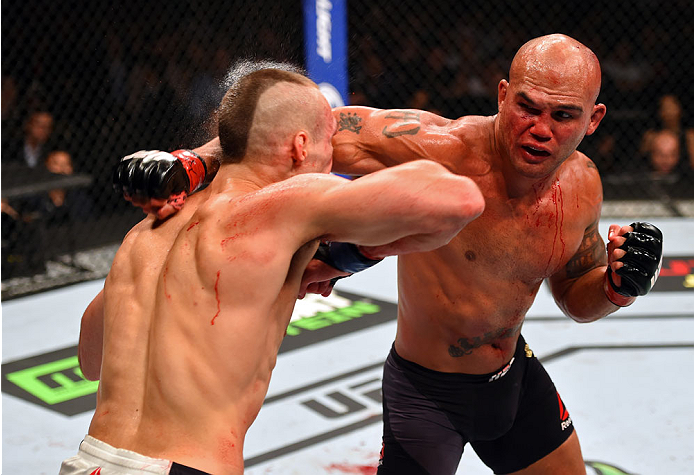 Two and a half years after their first encounter and with Lawler holding the welterweight title, these two savages engaged in an epic back-and-forth battle that remains on the short list for the best fights in MMA history.

While Lawler opened up McDonald early, the Canadian challenger turned up the tempo and took the fight to the welterweight champion, looking poised to put him away and claim the title at a couple different times before the two engaged in an iconic staredown in the center of the Octagon at the end of the fourth round.

Locked in a tight contest, Lawler came out firing to start the fifth and the accumulated punishment became too much for McDonald, who fell to the canvas just a minute into the final frame. As it turned out, the champion needed the finish to retain his title, as “The Red King” was up 3-1 on all three scorecards heading into the final five minutes.

After surprising everyone (except himself) by stepping in and subbing out McGregor on short notice at UFC 196 five months earlier, Diaz shared the cage with the Irish standout for a second time and the rematch managed to out-pace the original.

“The Notorious” one showed far more patience and precision early, utilizing leg kicks and limiting the number of bombing lefts he launched at Diaz, who once again took a little time to get warmed up. Once he did, however, the talented veteran started turning the tide, taking the fight to McGregor with the same high volume approach that led him to victory the first time around.

But this time, McGregor was able to avoid getting swept under in the crashing waves of punches, weathering what Diaz had to offer and using the final round to take a majority decision win before declaring “The King is back!”