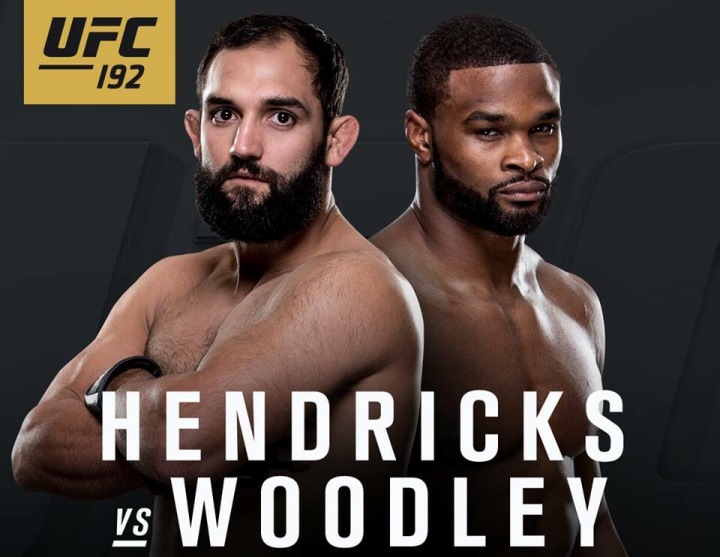 With just two events on the schedule for the month ahead, you might be tempted to think filling this column outlining the best fights on the calendar for October might be difficult.

You would be wrong.

UFC 192 this weekend at the Toyota Center in Houston is stacked and the return to Dublin later this month has a handful of interesting, influential bouts that you’re going to want to be sure to watch.

Here’s a look at the best of what’s on deck in October.

Featured on the UFC FIGHT PASS portion of this weekend’s card is a lightweight matchup that deserves your attention.

Martins has quietly gone 3-1 in the UFC with wins over Daron Cruickshank and Rustam Khabilov while going 14-2 over his last 16 fights. The only guy to beat him in the last four years is surging title challenger Donald “Cowboy” Cerrone, which tells you where the 33-year-old Brazilian fits in the 155-pound weight class, even if he’s slipped into the shadows thanks to a lengthy layoff.

As for Makhachev, he draws comparisons to his close friend and countryman Khabib Nurmagomedov, for obvious reasons. The 24-year-old made quick work of Leo Kuntz in his promotional debut at UFC 187 to push his record to a perfect 12-0, showing the kind of grappling we’ve come to expect from the Dagestani contingent in recent years.

This is going to be fun.

Namajunas returns for the first time since her championship loss to Carla Esparza back in December after her UFC 187 matchup with Nina Ansaroff was scuttled at the 11th hour, while Hill steps into the Octagon for the third time, continuing her education by fire after suffering her first professional loss to Tecia Torres at UFC 188 in June.

The Ultimate Fighter Season 20 alums are high upside, high output fighters that are looking to make their mark in the still developing strawweight division, and it should make for a wildly entertaining encounter to kick off the televised prelims on Saturday.

One month after flyweight champion Demetrious Johnson earned his seventh consecutive successful title defense, two of the men that have been turned back in their quest for gold during that streak collide in the final preliminary card bout of the evening.

Bagautinov returns for the first time since getting dismantled by DJ in Vancouver last June, having spent the last year on the sidelines after failing his post-fight drug screening at UFC 174. Before running into the dominant champion, “The Puncher” had put up three straight victories, including decision wins over dangerous knockout artist John Lineker and scrappy Tim Elliott.

As for Benavidez, all he’s done since the advent of the flyweight division is dominate every fighter he’s faced other than the reigning champion, posting a 7-0 mark against fighters whose last name isn’t Johnson. Last time out, the Team Alpha Male standout outworked another former title challenger, John Moraga, to extend his winning streak to three.

This is a matchup of top flyweight talents, and it’s on the prelims. That’s how good UFC 192 is.

After returning from a gruesome knee injury earlier in the year, Pena gets the chance to vault into the Top 10 with a firecracker of a fight against Eye to kick off the main card this weekend at the Toyota Center.

“The Venezuelan Vixen” looked like a legitimate prospect in becoming the first female Ultimate Fighter winner in history and showed no negative effects from her layoff in rolling through Milana Dudieva in April, pushing her record to 7-2 while claiming a Performance of the Night bonus in the process.

Eye was eager to get back into the Octagon after losing to Miesha Tate in July and she gets her wish against Tate’s close friend and the first overall pick from TUF 18. The StrongStyle Fight Team standout only fought twice in 18 months following her UFC debut, and she believes the opportunity to compete more frequently will produce improved results this time around.

In a division where the champion is rolling through challengers without much trouble, the winner of this one could put themselves in a position where another victory gets them into the title conversation in the second half of 2016.

While not officially declared a title eliminator, it’s not out of the question that the winner of this one could be next in line to face whomever emerges from the main event with the light heavyweight title.

Having won four straight and after getting into a verbal altercation with Daniel Cormier the night “DC” won the title in May, many expected Bader to get rescheduled opposite Cormier in a championship bout after their June 6 showdown in “The Big Easy” was scrapped. Instead, the former Ultimate Fighter winner welcomes Evans back to the Octagon after nearly two years away from competition.

Evans has been sidelined after undergoing a pair of ACL surgeries, the same frustrating situation that kept his fellow UFC on FOX analyst Dominick Cruz out of action for an extended stretch. Like Cruz, Evans’ initial ligament replacement didn’t take and he had to go under the knife again, but the 36-year-old is finally healthy and ready to return, and he dives right back into the deep end of the 205-pound talent pool here.

Bader and Evans are ranked No. 4 and No. 5 in the light heavyweight division, respectively, and the winner of this one will be on the longest winning streak of the Top 10 contenders. Depending on how things shake out in the main event – and with Jon Jones’ possible return –the victor could become the first title challenger in 2016.

Big 12 rivals turned welterweight title contenders square off in the co-main event as Woodley gets his wish to face the former champion, while Hendricks looks to continue his march to another championship opportunity.

After losing the title to Robbie Lawler at UFC 181, Hendricks rebounded with a dominant, back-to-basics win over Matt Brown at UFC 185 in March. While he was hoping to complete his trilogy with the reigning champ, “Bigg Rigg” will instead rekindle his collegiate wrestling rivalry with Woodley, whom he beat in the Big 12 finals a decade ago.

While Hendricks wasn’t focused on this matchup, this was the only fight “The Chosen One” wanted. Coming off back-to-back wins over Dong Hyun Kim and Kelvin Gastelum, the 33-year-old University of Missouri product was angling to face the former champ for months, and he gets his chance to put himself in a position to challenge for the title with a win here.

Both are talented wrestlers with explosive power, which means no matter where this one takes place, it should be a close, hard fought battle.

The new champ defends his title for the first time close to home against a dangerous challenger who stepped into a similar situation two years ago and became a part of the best fight in the history of the division.

Cormier rebounded from getting floored right out of the chute to grind down and submit Anthony Johnson to claim the vacant light heavyweight title. Now, the 36-year-old, two-time Olympian heads to Houston to defend the title against Gustafsson, an unexpected, but dangerous challenger.

Last time “The Mauler” was in this position, he pushed Jon Jones to the limit in an historic battle at UFC 165. While few expected the Swedish contender to be the first man to face Cormier for the strap, Gustafsson is clearly a dangerous opponent that does a lot of things well and is a real test for the freshly minted champion.

Nicolas Dalby vs. Darren Till

This is the sleeper matchup of the month – a welterweight pairing between two fighters with a combined 27 wins against zero defeats making their sophomore appearances inside the Octagon.

The 30-year-old Dalby picked up a split decision victory over Elizeu Zaleski dos Santos in his promotional debut in May to push his record to 14-0. The well-rounded Danish fighter showcased his ability to do what is necessary to grind out a tough win and should be even better the second time around.

As for Till, he burst on the scene with a devastating second-round stoppage win over Wendell Oliveira a couple weeks after Dalby debuted, using vicious ground-and-pound to graduate to prospect status in the UFC. The 22-year-old has 11 finishes in 13 victories, but gets his toughest test to date here.

Sit back, relax and enjoy the fireworks when these two heavyweight contenders collide.

Miocic returns after throttling Mark Hunt on his home turf back in May, a performance that had many in the industry wondering if the Cleveland, Ohio native would be the next man to challenge for the heavyweight title. The recently engaged Miocic is a tremendous athlete with a well-rounded skill set and conditioning for days, giving him the ability to push a tremendous pace and compete wherever the fight takes place.

“Big Ben” has claimed three straight victories – all stoppages – to establish himself as threat in the big boy ranks. After stopping Alistair Overeem last September, Rothwell earned a first-round submission win over Matt Mitrione back in June, lacing up a gogo choke to tap out the former NFL defensive lineman in just under two minutes.

This one should be non-stop action as long as it lasts and, depending on how things play out, the winner could find themselves fighting for UFC gold in 2016.

After consecutive victories since returning to lightweight, Poirier has rocketed into the Top 15 and established himself as an intriguing addition to the deepest division in the organization. No longer shedding massive amounts of weight in order to compete, the American Top Team standout has earned first-round stoppage wins over Diego Ferreira and Yancy Medeiros, showcasing the same power and tenacity that made him a perennial contender in the featherweight ranks for years.

Through two UFC appearances, Duffy has given fans plenty of reasons to pay attention to his progress, in addition to his being the last man to defeat Conor McGregor. Now based out of the Tristar Gym in Montreal, the Donegal native dropped Jake Lindsey with a head kick and punches to win his promotional debut before submitting Brazilian Jiu-Jitsu black belt Ivan Jorge four months later in Scotland.

While the division is stacked and the list of contenders is lengthy, the winner of this one will put themselves into the conversation, especially if they keep their run of first-round finishes intact.