The 10: Outstanding Action on Tap for Can’t-Miss May 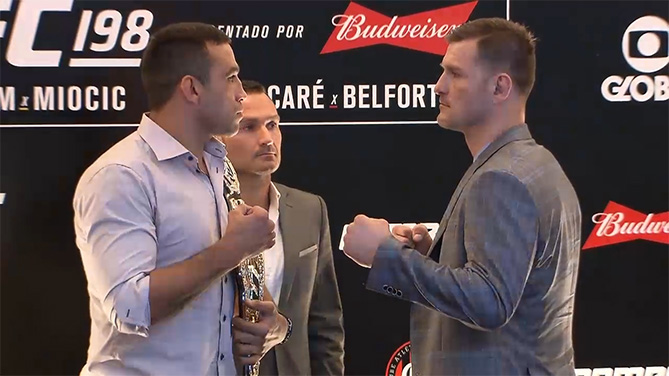 If you’re a UFC fan, give matchmakers Joe Silva and Sean Shelby a round of applause right now because May is one of those months where The 10 could quite easily be The 20 and it’s thanks to the efforts of those two men.

How good are the three events set to take place over the month ahead?

The quality lightweight scrap between Rustam Khabilov and Chris Wade didn’t make the cut. Neither did the prospect battle between Renato Moicano and Zubaira Tukhugov. Top 15 welterweights Tarec Saffiedine and Rick Story got bumped too, as did Anderson Silva and Uriah Hall.

That’s right: the greatest fighter in the history of the sport got bumped from a breakdown of the most compelling fights on the calendar for the month ahead; that’s how stacked these three May events are.

Mr. Silva and Mr. Shelby – you have outdone yourselves.

UFC Fight Night: Overeem vs. Arlovski (May 8 – Rotterdam, The Netherlands)

Karolina Kowalkiewicz vs. Heather Jo Clark
After debuting in the Octagon with a hard-fought decision win over Randa Markos in December, Kowalkiewicz looks to make it two in a row (and nine straight overall) with a victory over Clark.

The undefeated Polish fighter had competed at flyweight prior to signing with the UFC and didn’t appear to struggle with the adjustment to a new division, sweeping the scorecards against the durable and gritty Canadian in Orlando late last year. Clark will be looking to play spoiler and put herself on the list of contenders in the 115-pound ranks by handing Kowalkiewicz the first loss of her career. She earned a win over Bec Rawlings on the TUF 20 Finale and can propel herself up the rankings by earning a second straight UFC win.

After a relatively quiet start to the year, the action in the strawweight division is starting to heat up and with all but two members of the Top 10 having either already fought or with fights on deck, the outcome of this one could have an impact on how the division shakes out once the dust settles at the end of the summer.

Albert Tumenov vs. Gunnar Nelson
Tumenov is one of the brightest prospects in the sport – a 24-year-old knockout artist with impeccable striking, a five-fight winning streak and a sly sense of humor. Prior to his bout with Alan Jouban at UFC 192, he told me he was going to make “Brahma” consider making modeling his full-time career. Less than three minutes into the first round, Tumenov earned the stoppage victory and a Performance of the Night bonus.

Nelson enters off a one-sided loss to Demian Maia in December, having lost two of his last three after a 14-fight unbeaten streak to start his career. The Icelandic welterweight is gifted in all facets of the game, but has struggled with motivation and focus in the past. While this doesn’t feel like a “must-win situation,” Nelson could certainly use a strong showing to rekindle some of the contender talk that accompanied his early successes in the Octagon.
RELATED CONTENT: Watch Rotterdam Free Fight: Arlovski vs Freeman

Alistair Overeem vs. Andrei Arlovski
A battle of Top 5 heavyweights closes out the UFC’s debut event in Rotterdam, with Dutch superstar Overeem looking to extend his winning streak to four with a victory over his Jackson-Winkeljohn MMA teammate Arlovski.

Not that long ago, Overeem looked like a fighter in decline, having lost three out of four, with his lone victory being a tepid performance against Frank Mir at UFC 169. Two years and a couple months later, “The Reem” is rolling, entering this headline pairing off a second-round stoppage win over former champ Junior dos Santos.

Conversely, prior to his last fight, Arlovski had been in the midst of a renaissance, collecting four straight victories to emerge as an unlikely contender in the heavyweight ranks. That was put on hold – at least temporarily – in January thanks to a first-round stoppage loss to Stipe Miocic, but a win over Overeem can get him right back into the title chase. 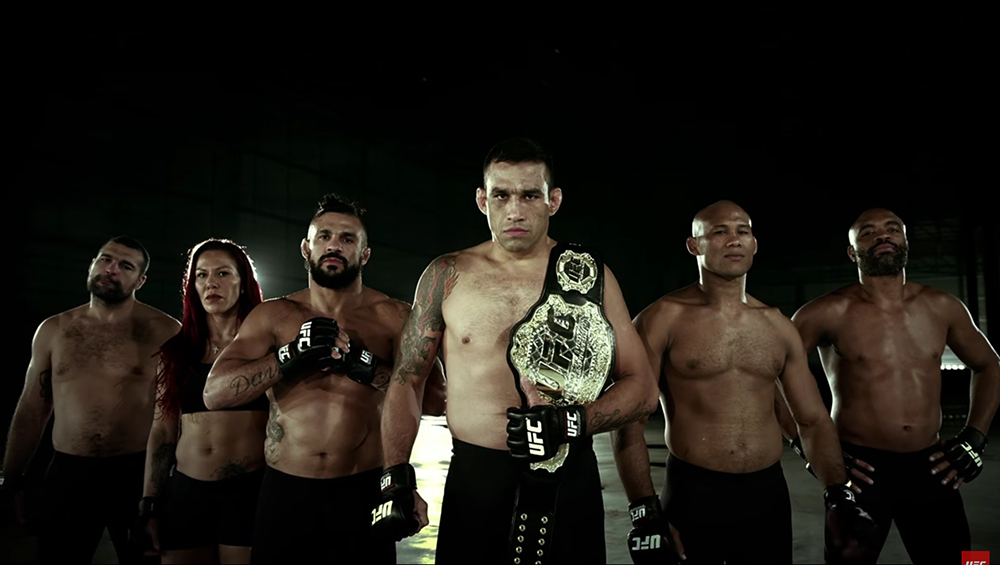 Demian Maia vs. Matt Brown
This is one of those matchups that reminds you how deep and talented the welterweight ranks are as somehow neither Maia nor Brown is ranked in the Top 5 right now. Bonkers, right?

Maia has collected four straight victories over the last two years (give or take a month), including being the lone man to defeat Neil Magny and big brother’ing Gunni Nelson on the mat for 15 minutes at UFC 194. The world-class jiu-jitsu player has gone back to his roots and returned to being a nightmare matchup as a result. With a fifth straight victory, expect Maia’s call for a title shot to get even louder.

Brown got back in the win column with a first-round submission finish of Tim Means that kicked off the best six-fight stretch of action to ever grace the Octagon last summer at UFC 189. One of the toughest outs in the sport, the only men to beat “The Immortal” in the last four-plus years are the current champ Robbie Lawler and former titleholder Johny Hendricks, so the Brazilian submission specialist has got his work cut out for him.

Cris Cyborg vs. Leslie Smith
Following years of speculation, Cyborg will finally make her UFC debut in a catchweight bout with Smith that comes in her hometown of Curitiba.

One of the most dominant fighters in the sport today, Cyborg lost her professional debut and has not tasted defeat since. Currently riding a five-fight winning streak, the reigning Invicta FC featherweight champion is a punishing Muay Thai striker with blistering power and a berserker-like approach inside the cage.

Credit to Smith for raising her hand and jumping at the opportunity to share the cage with the feared Brazilian. Fresh off a win over Rin Nakai and having competed as a flyweight in the past, the Skrap Pack member is one of the gutsiest fighters in the sport and will surely meet Cyborg in the center of the Octagon once this one starts.

Jacare Souza vs. Vitor Belfort
Two Brazilian standouts stationed near the top of the middleweight division collide in a matchup that could determine who will face the winner of the UFC 199 main event between Luke Rockhold and Chris Weidman.

Souza enters off a razor-thin split decision loss to Yoel Romero at UFC 194, a bout many scored in his favor and one that halted his eight-fight winning streak. Before that, his last loss came back when he dropped the Strikeforce middleweight belt to Rockhold, and you can be sure that Souza would like to a chance to avenge that setback on the biggest stage in the sport with UFC gold hanging in the balance.

In order to get there, however, he’ll need to beat Belfort, something only two middleweights have been able to do since “The Phenom” returned to the Octagon at UFC 103 – Anderson Silva and Chris Weidman. The Brazilian veteran, who made his UFC debut on February 7, 1997, has finished each of his last four victories via headkick and is a perfect 7-0 in non-title bouts over the last six-plus years.

Fabricio Werdum vs. Stipe Miocic for the UFC heavyweight title
The lone championship bout on the calendar for May is a battle for the heavyweight strap, one that pits a well-rounded, first-time challenger against a reigning champion looking to further cement himself as one of the best in the history of the division.

Miocic earned his shot with consecutive dominant outings against Mark Hunt and Andrei Arlovski that showed the proud Cleveland native’s full compliment of skills. Against Hunt, the athletic challenger used his wrestling and superior conditioning to put the veteran knockout artist on the canvas and bury him under a non-stop barrage of ground-and-pound. Eight months later, it was his own knockout power that was one display as Miocic needed less than a minute and only a couple clean shots to put Arlovski down for the count.

After becoming the undisputed champion with his third-round submission win over Cain Velasquez at UFC 188, Werdum looks to continue his reign atop the big boy ranks and extend his winning streak to seven in this one. The affable Brazilian has transformed himself into a complete fighter since teaming up with Master Rafael Cordeiro and is as opportunistic as they come. Whether he sees an opening standing, on the ground or along the fence, Werdum is always ready to attack and can finish fights in a number of ways.

Aljamain Sterling vs. Bryan Caraway
Following a lengthy pursuit, Sterling finally gets his wish and will share the cage with Caraway in this one, which serves as the UFC FIGHT PASS featured prelim for this event.

A flawless 12-0, with his last four wins coming inside the Octagon, the 26-year-old Sterling is a confident surging contender from the Serra-Longo Fight Team and one of several young bantamweights competing this month that should be a fixture in the division for the foreseeable future. The man his coaches call “Aljo” has a tremendous ground game and swagger for days, and if he picks up another victory here, he’ll put himself in the mix for a Top 5 opponent next time out.

If Michael Bisping is the gold medalist for being called out by the opposition, Caraway takes the next spot on the podium, as seemingly everyone that gets a win in the bantamweight division likes to take aim at the underrated veteran. The chief architect of Miesha Tate’s rise to championship success in the women’s bantamweight division, the former TUF contestant is 5-2 in the Octagon and focused on halting Sterling’s unbeaten run before helping Tate prepare for her first title defense.

Renan Barao vs. Jeremy Stephens
As if the featherweight division needed more talent, former bantamweight champ Barao makes his divisional debut in this co-main event pairing with Stephens that will instantly determine where the Brazilian stands in his new weight class.

Over the last decade, only TJ Dillashaw has managed to beat Barao and he did it twice, most recently stopping him in their bantamweight championship rematch last summer in Chicago. Getting down to ‘35 was always a chore for the Nova Uniao product, and so he’s opted to move up in weight and test the waters at ‘45 where his blend of speed and power should translate nicely.

If you want to see how deep and talented the featherweight division is, check out Stephens’ record. The Alliance MMA product is just 1-3 in his last four, but each of those setbacks have come in entertaining fights against Top 10 opponents. Brandishing big power and a willingness to trade, Stephens has the potential to turn Barao’s featherweight debut into a nightmare. 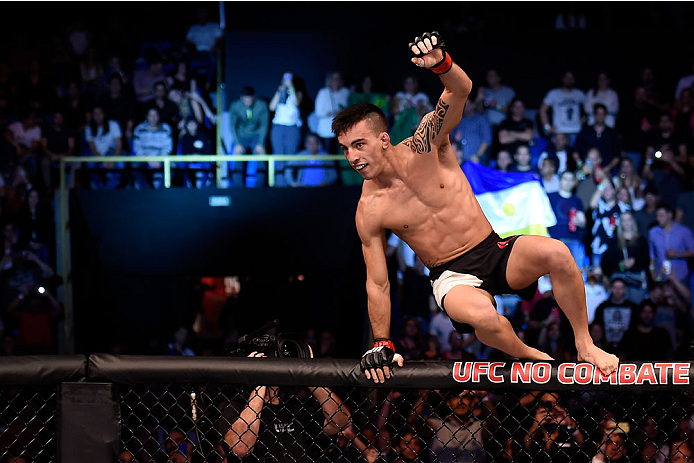 Thomas Almeida vs. Cody Garbrandt
Everyone else gets goosebumps thinking about this fight too, right? It can’t just be me.

Almeida is one of the most explosive and exciting fighters in the sport today – a 24-year-old finisher with a sparkling 21-0 record, a devil may care approach in the cage and four consecutive post-fight bonuses. Victories over Yves Jabouin, Brad Pickett and Anthony Birchak have carried him into the Top 10 and put him on everyone’s radar as a future title contender and potential champion in the 135-pound ranks.

That’s a position Garbrandt wants for himself and if it means going through Almeida to get there, so be it. “No Love” is the latest Team Alpha Male product to land in the UFC and show championship potential, having earned a trio of victories, including a first-round stoppage win over “Tanquinho” Mendes back in February. Currently unranked, halting Almeida’s winning streak would vault him into the Top 10 and put the Ohio native in line for another marquee matchup later in the year.