The 10: Memorable May on Tap in the Octagon

But here comes May…

Fight fans have been counting down to this month since UFC 211 started to come together and the buzz has grown every time a great fight has been added to the lineup. Couple that excitement with a return to Sweden carrying a lot of clout in the light heavyweight division and you have a nice little two-piece to enjoy over the next 30 days.

Here are the must-see matchups on tap for May.

The featherweight division has been front and center for the last couple years and critical fights in the 145-pound ranks have become a regular addition to each event. While this one falls a little under the radar compared to some of the recent and upcoming marquee bouts in the division, it should be wildly entertaining and carries some rankings implications as well.

Skelly has earned back-to-back stoppages in winning six of his last seven, with his lone stumble in that stretch coming against Darren Elkins. After losing his short-notice debut, Knight has collected three straight wins and become a cult favorite for his Diaz-esque approach in the Octagon.

This has the markings of a potential Fight of the Night, as both men are comfortable wherever the fight goes and don't mind throwing caution to the wind, biting down on their mouth guards and getting dirty.

When this fight is closing out the prelims, you know it’s a stacked card.

This is Alvarez’ first bout since losing the lightweight title at UFC 205 and you can be sure the former champ will be looking to remind everyone that he’s still a force to be reckoned with in this division. Meanwhile, Poirier is coming off a gutsy win over Jim Miller in February and looking to establish himself as a serious title threat for the first time in his career.

Both guys are consistently entertaining on their own and paired together, they are capable of stealing the show in Dallas.

This is such an interesting intersection fight, where both guys are at a crossroads and the outcome of this contest will have a serious impact each way.

After winning his first 10 professional fights, Cejudo has dropped back-to-back fights to the top two fighters in the division, Demetrious Johnson and Joseph Benavidez, while Pettis has put together a tidy three-fight winning streak to get within spitting distance of a title shot.

Will the established contender assert his dominance? Can the young upstart take another step forward? The possibilities are numerous and the fight should be a really interesting chess match.

This is really a graduate-level version of the previous fight in a lot of ways, as Rodriguez enters in a similar position to Pettis, but Edgar, as a former champion and perennial contender (in two different divisions), is a step or two ahead of Cejudo.

Like that bout, this one should be tremendous, as Rodriguez is a highlight reel waiting to happen stepping in against one of the most resilient, gutsy, experienced fighters on the roster. Edgar hasn’t lost a non-title fight in nine years and showed at UFC 205 that he’s still one of the best in the featherweight division.

Mark my words: this is going to be one of those fights we look back on in a couple years as a pivotal bout in the careers of both men, but how it plays out on May 13 is anyone’s guess right now.

Maia has been on an absolute tear over the last couple years, putting together a six-fight winning streak to establish himself as one of the top contenders in the welterweight division. He’s gone back to his grappling roots, subbed out Carlos Condit in under two minutes last summer and has been politely politicking for a title shot ever since.

Following a lengthy run at lightweight and a pair of split decision losses, Masvidal has won three straight during what he calls the “Easy Money Campaign.” Most recently, “Gamebred” blistered Donald Cerrone in January, showcasing the fluid striking and sneaky hand speed that has always made him a tough out and has him in a position to potentially challenge for championship gold if he can halt Maia’s run.

There are bigger names hitting the cage in the month ahead, but this is the one I’m looking forward to the most.

Joanna Jedrzejczyk vs. Jessica Andrade for the women’s strawweight title

After mauling Carla Esparza to claim the title and thrashing Jessica Penne and Valerie Letourneau in her first two championship defenses, “Joanna Champion” has proven her mettle in her last two showings, rallying to beat Claudia Gadelha before outpacing Karolina Kowalkiewicz in a bout that was closer than the final scores indicate.

Despite all that, this might be her most difficult fight to date.

Andrade has been a wrecking ball since arriving in the strawweight division, smashing through Penne and Joanna Calderwood before putting heavy volume on Angela Hill on Super Bowl Saturday in Houston to push her winning streak to three.

This should be fireworks from the outset as Andrade comes forward relentlessly and Jedrzejczyk has no problem trading shots with anyone that wants to catch hands in the cage. You don’t want to miss this fight.

Stipe Miocic vs. Junior Dos Santos for the heavyweight title

These two first met in December 2014 in a fight that is an underappreciated classic – a five-round back-and-forth between two heavyweights who left it all in the cage – and the sequel comes with a bunch of interesting questions.

This bout takes place one year less a day since Miocic won the title from Fabricio Werdum and he solidified his position atop the division with his hometown victory over Alistair Overeem back in September. Not only is this a chance to avenge his prior loss to Dos Santos, but also an opportunity for Miocic to create some intriguing possibilities for the second half of the year.
RELATED: Miocic's Greatest Five Fights | Top 10 JDS Fights

For the Brazilian, this is a chance to return to the top of the heap and start a new chapter in his career. He’s fought just twice since facing Miocic on FOX in Phoenix, losing to Overeem before thoroughly out-working Ben Rothwell last spring in Croatia. Now stationed at American Top Team, “Cigano” has always been a serious knockout threat and will be looking to land something sharp from the outset.

Chances are someone is going to sleep. 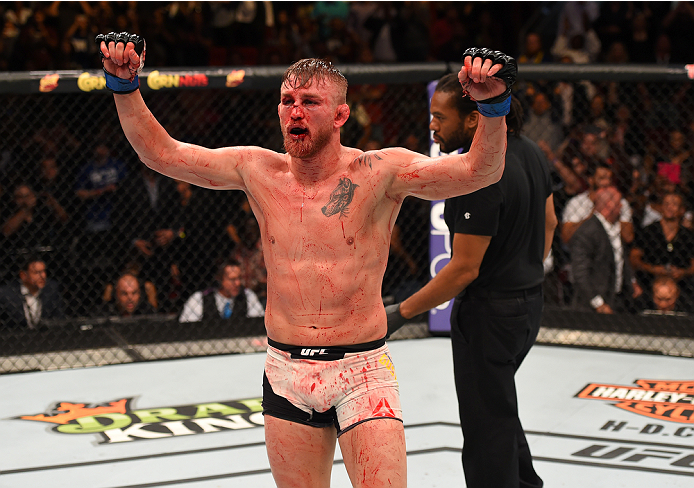 Want a sneaky-good fight that’s flying way under the radar to hone in on this month? Look no further than this intriguing contest.

Taisumov has won four straight – all of which are finishes – but they’ve been spaced out over two years and change, which has keep him in the shadows in the staggeringly deep lightweight division. Silva is 9-1 for his career with eight finishes and earned his most recent victory in 34 seconds.

In a weight class where every single fight is hypercritical and garnering lasting attention is a difficult task, you can be sure these two will be primed and ready to show out in Sweden once fight night rolls around.

These two guys are fresh contenders in the 205-pound division and this matchup should garner a lot of attention.

Cirkunov is a perfect 4-0 in the UFC with four finishes, most recently choking out Nikita Krylov inside the first round at home in Toronto. A tremendous athlete with an outstanding grappling base, Cirkunov remains a high upside talent who hasn’t reached his full potential yet.

Oezdemir collected a split decision victory over Top 10 fixture Ovince Saint Preux in his promotional debut, taking the bout on short notice and proving he belongs in the big leagues with a gutsy effort. With a full camp behind him and bolstered by that debut win, he could cement himself as a contender by halting Cirkunov’s run of success.

From two emerging contenders to a pair of proven veterans in the light heavyweight ranks, there aren’t any real stakes on the line in this fight, yet it feels like a pivotal contest for both men.

Gustafsson has dropped a pair of tight decisions in championship fights and contemplated his future in the sport at times, but remains one of the best fighters in the division, without question. Teixeira is entrenched in the Top 5 and is a well-rounded force, but has struggled against the division’s elite and is getting on in years…. although he’s somehow younger than me.

The winner puts themselves on the short list of potential title challengers for the latter half of the year, while the loser could be taking a long look in the mirror as they try to figure out what comes next.