The 10: A-May-zing Month of Action on Tap 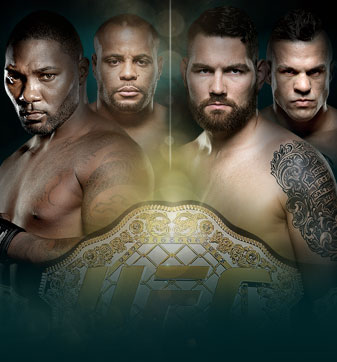 May is absolutely loaded with outstanding fights.

With four events from four different continents, the month ahead offers every manner of fight one could hope for: championship grudge matches, contenders battling for position in the pecking order, veterans looking to start one more run and youngsters eager to prove that their time is now.

This month is so packed with phenomenal fights that this edition of The 10 should really be The 12 or The 15 or The 20. Leaving out fun scraps like Brad Tavares vs. Robert Whittaker is tough, but that’s what happens when there is an all-star line-up at UFC 187 and a handful of other amazing fights to discuss.

Here’s a look at the best of what’s on tap on the month ahead.

A Top 5 heavyweight matchup that is a safe bet to be bonkers, this one will determine which of these men remains in the title conversation and perhaps who will be the first to challenge the winner of next month’s championship unification bout between Cain Velasquez and Fabricio Werdum.

Miocic returns for the first time since his December loss to Junior dos Santos, a performance that established the Strong Style Fight Team member as a legitimate player in the heavyweight division. For Hunt, it’s his first appearance since losing to Werdum on short notice at UFC 180 in an interim title bout.

Whether this goes 25 seconds or the full 25 minutes, it should be entertaining. Hunt has one-shot knockout power and will have the support of the Australian fans behind him, while Miocic is the more well-rounded of the two and looking to avoid the first two-fight losing streak of his career.

There is no way this fight isn’t all kinds of fun.

A battle of two fighters coming off impressive victories, though one was significantly more recent than the other.

Last time out, Mousasi blitzed, clipped and stopped Dan Henderson, leaving the legend slumped along the fence protesting the stoppage. It was a sharp bounce-back performance for the former Strikeforce standout who has yet to record consecutive victories since transitioning into the UFC cage.

Philippou also picked up an impressive win in his most recent appearance, earning a first-round stoppage win over Lorenz Larkin, but that victory came all the way back in May 2014. Now ready to return, this is a great chance for the Long Island native to make a statement and advance in the middleweight rankings.

Two of the best fighters to ever compete in the lighter weight classes, this is a fantasy matchup brought to life and positioned as the main event of the UFC’s inaugural event in Manila.

Faber moves up to compete in the featherweight division for the first time in five years, carrying a two-fight winning streak into this one. “The California Kid” has never lost a non-title fight in his career – yes, you read that correctly – and has no intention of letting that change when he shares the cage with Edgar here.

After losing his bid to claim featherweight gold in his divisional debut, “The Answer” has put together a three-fight winning streak, capped by a dominant effort against Cub Swanson in Austin, Texas last November. Adding a win over Faber and a fourth consecutive victory to his recent form would put Edgar on the short list of options for a title shot later this year.

Despite a pair of major changes, this month’s Pay-Per-View is still packed with compelling, pivotal fights across five divisions.

With all due respect to Joseph Benavidez and John Moraga – the flyweight tandem that kicks off the main card – this is the most important flyweight matchup on the May 23 fight card.

Dodson has been talking a blue streak about champion Demetrious Johnson while recovering from knee surgery and if he’s able to get by the durable veteran Makovsky, a rematch between “Mighty Mouse” and “The Magician” could come together.

Dodson hasn’t fought since earning a win over Moraga in his hometown of Albuquerque last summer, while Makovsky is coming off a grind ‘em out victory over Tim Elliott back in February. This one should be decided in the scrambles and could determine who is next in line to challenge for the flyweight title.

Arlovski has picked up back-to-back wins since returning to the UFC, first scoring a unanimous decision victory over Brendan Schaub in Vancouver before knocking out Antonio “Bigfoot” Silva in Brazil. “The Pit Bull” has won four straight and eight of his last 10 fights overall, so any talk of this resurgence being a fluke should be silenced by now.

After spending a couple years training with Arlovski at as a member of Team Jackson-Winkeljohn, Browne relocated to Glendale, California and picked up a first-round stoppage win over Schaub in his debut appearance under the guidance of Edmond Tarverdyan.

Just as the Miocic-Hunt tilt could have championship implications, so too could this one, especially if one of these knockout artists gets separated from their consciousness early and/or in spectacular fashion.

Filling in for the injured Khabib Nurmagomedov, Makdessi makes a quick turnaround after piecing up Shane Campbell in Montreal to step in with Cerrone in a bout that carries nothing but upside for the Tristar Gym product.

If he comes up short, it was a short notice contest against one of the top lightweights in the UFC, but if he wins, “The Bull” quickly becomes a contender in the deepest, most talented division in the organization.

While you know “Cowboy” was surely salty at Nurmagomedov falling out, the owner of the BMF Ranch has never and will never back away from a fight and he goes full throttle no matter the opponent. Don’t expect anything less against Makdessi.

A fight more than a year in the making, it’s finally time for Weidman and Belfort to share the Octagon, resolve their differences and determine who will be the UFC middleweight champion heading into the second half of 2015.

First scheduled to take place at UFC 173, injuries to Weidman have pushed this contest back most recently, but it’s Belfort who enters off a significant layoff. “The Phenom” last fought in November 2013 when he stopped Dan Henderson to pick up his third first-round stoppage win of the year. He looked unstoppable during that stretch, but a lot can change in 18 months.

Weidman is a perfect 12-0 and solidified his place as the best middleweight on the planet with a successful title defense against Lyoto Machida at UFC 175 last summer. In a fight many considered one of the best of the year, the Serra-Longo Fight Team member outworked “The Dragon” to retain his title and set up this long-awaited showdown with Belfort.

This may not be the fight that was initially scheduled to headline this event, but it’s still a damn good fight nonetheless.

Johnson has been scary-good since his UFC 142 loss to Belfort, going a perfect 9-0, including back-to-back first-round stoppage wins over Antonio Rogerio Nogueira and Alexander Gustafsson, the latter of which silenced 30,000 Swedes in an instant.

After coming up short in his first bid to claim UFC gold, Cormier gets a second consecutive opportunity to ascend to the top of the light heavyweight division, jumping at the chance to face Johnson. Facing “Rumble” on a full camp is a risky proposition and “DC” is doing it on a little less than a month’s notice, which tells you how confident the American Kickboxing Academy product is in his abilities.

Regardless of the circumstances that caused this fight to come together, the UFC 187 main event should be electric and will produce a new light heavyweight champion.

With flyweight champion Demetrious Johnson adding another name to his list of vanquished challengers last month in Montreal, this pairing between two Top 15 contenders that have yet to spend time in the Octagon with “Mighty Mouse” could carry championship implications.

Formiga has picked up back-to-back wins over Scott Jorgensen and Zach Makovsky and sits at No. 5 in the divisional rankings as the only fighter in that elite quintet that Johnson has yet to defeat. Reis, on the other hand, resides at No. 13 and also boasts a win over Jorgensen, plus a victory over Joby Sanchez.

Regardless of who runs their winning streak to three, the winner should find themselves on the short list of options for a summer engagement with the flyweight champion.

This is not a bad way to close out the month.

“The Natural Born Killer” makes his return following knee surgery by traveling to Brazil to take on a former title contender coming off a nasty second-round stoppage win over a talented emerging prospect. Forecast: fireworks.

Condit has been a fixture in the upper tier of the welterweight division for several years and competes for the first time since suffering a nasty knee injury in a loss to Tyron Woodley last March. Always one of the most entertaining and aggressive fighters to step into the cage, don’t expect the layoff to have changed any of that for the returning former WEC champion.

Alves made a return of his own last April, coming back from two years on the shelf to earn a decision win over Seth Baczynski before rebounding from a rocky opening frame to stop Jordan Mein back at UFC 183 in January. A perennial contender before his layoff, the American Top Team fixture is looking to work his way back into the mix in the 170-pound ranks and beating Condit would surely expedite the process.