The 10: March Madness in the Octagon

With all due respect to the events that took place in January and February and the 57 pairs of athletes that have stepped into the Octagon already this year, this is the month when business starts to pick up.

March arrives with three events, starting with UFC 209 and followed by a pair of international events delivering tons of familiar names and intriguing fights into the cage, many of which should have an impact on how the schedule in the second half of the year shakes out.

Let’s get right into it.

This fight isn’t going to get any time in the spotlight given the composition of the rest of the card and the names those fights feature, but make no mistake about it: this is an outstanding featherweight fight and should serve as Bektic’s entrance example for a place in the Top 10.

Elkins is a quintessential Midwest grinder, but he’s been picking up some tricks from the boys at Team Alpha Male as of late, while Bektic is a rising star from American Top Team with an 11-0 record overall and four wins in the UFC, each one more impressive than the last.

People think “gatekeeper” is a dirty word, so let me put a different spin on things: Elkins is the dude with a clipboard at the front of the VIP and Saturday night in Vegas, he’ll be checking to see if Bektic’s name is on the list.

Given their lengthy careers and the amount of overlap that exists between them, it’s kind of surprising that this is the first UFC meeting between Overeem and Hunt (the two fought in DREAM in 2008, Overeem winning by submission) and the veterans cross paths at an interesting time for each man.

Overeem returns after failing in his attempt to claim the UFC heavyweight title back in September, while Hunt steps into the cage for the first time since UFC 200, where he faced Brock Lesnar before all kinds of chaos ensued.

Both men need a victory to maintain their place in the divisional hierarchy and potentially make one final run at challenging for championship gold, and given that 61 of their 79 combined MMA fights have ended inside the distance, someone is likely to end up disappointed and nursing a serious headache on Sunday, March 5.

This might be the best fight the UFC could make at this moment – a fighter with a perfect 24-0 record facing off against a surging contender on a nine-fight winning streak that has netted him a Lauzon-esque six bonuses in his last five fights.

Nurmagomedov eschewed all concerns about rust and whether he was still a serious threat in the lightweight division with his lopsided submission win over Michael Johnson at UFC 205 in New York. As impressive as the performance was, the commentary track Nurmagomedov provided might have been even better. Who tells their opponent mid-fight that they should give up because “I must fight for the title; you know this,” like it’s nothing?

Not to be outdone, Ferguson put his winning streak on the line against former champ Rafael Dos Anjos and delivered a virtuoso performance, outworking the Brazilian from start to finish to solidify his position at the top of the division before the Dagestani standout joined him a week later.

Now they lock horns in an intriguing clash of styles with interim gold – and in all likelihood, a future showdown with Conor McGregor – on the line. No matter how this plays out, it should be electric.

Tyron Woodley vs. Stephen Thompson – for the UFC welterweight title

Five rounds at UFC 205 were not enough to resolve this one, so “The Chosen One” and “Wonderboy” will run it back here in the main event.

Their battle in the Big Apple was a tale of two fights, with Woodley handily winning two rounds by showcasing his grappling ability (Round 1) and nasty power (Round 4) while Thompson stayed light, elusive and active to take the three remaining frames, resulting in the bout being scored a majority draw.

Now the time has come to see which of these two has made the more significant adjustments and can exert their influence on the proceedings more. Whoever does will walk away as the undisputed UFC welterweight champion.

With flyweight champ Demetrious Johnson closing in on Anderson Silva’s record for consecutive successful title defenses, this one could be a bout to determine who faces “Mighty Mouse” when he looks to equal the Brazilian legend’s mark later this year.

Formiga is a savvy, experienced veteran, once viewed as the best fighter in the division before the UFC added the 125-pound ranks to its fold. While he’s just 5-3 inside the Octagon, his only losses have come to former title challengers, and against everyone else, the Nova Uniao product has shown why he’s been a Top 5 flyweight for the majority of his career.

Borg gets a grand opportunity to make a splash here, but first he has to make it through Friday’s weigh-ins without incident. The New Mexico native has missed weight in two of his last three bouts and although he’s obviously talented and boasts a ton of upside, another mishap could earn him a one-way ticket to bantamweight, regardless of how things play out here.

That said, beating Formiga would be a massive step forward and push him to the front of the list of young upstarts looking to make waves in 2017.

Say hello to your “Damn, lightweight is so good!” matchup of the month.

After an inconsistent start to his UFC career, Trinaldo has rattled off seven consecutive victories, including victories over Chad Laprise, Ross Pearson and Paul Felder. All those triumphs have carried “Massaranduba” to No. 11 in the rankings.

Seriously – seven straight wins and he can’t crack the Top 10.

In order to keep his run of success going, he’ll have to get through Lee, a confident and talented 24-year-old on a three-fight winning streak and coming off the most impressive performance of his career. Quick, powerful and not lacking in confidence, “The Motown Phenom” has all the tools to be a contender for years to come, even if a win here doesn’t guarantee him a place among the division’s elite.

Lightweight is just so good.

Just in case the above fight didn’t drive home the point about lightweight being loaded, here’s a Top 10 pairing that should have people salivating, yet still somehow flies a little under the radar.

Without much fanfare, Barboza has taken his game to the next level in the last couple years, going 3-1 in his last four fights with his lone setback coming against Tony Ferguson. In his last two outings, the savage kicker has posted consecutive decision wins over Anthony Pettis and Gilbert Melendez to remove all doubt about his place in the division and another win here should put him in the thick of the title chase.

Dariush is a standout grappler who is developing into a more well rounded fighter under the tutelage of Master Rafael Cordeiro, and after losing to Michael Chiesa to start his 2016 campaign, he rebounded with strong showings against James Vick and Rashid Magomedov, a pair of “better than you think” members of the most talent-rich division in the sport.

This is a classic clash of styles and it should be compelling to watch from the outset. 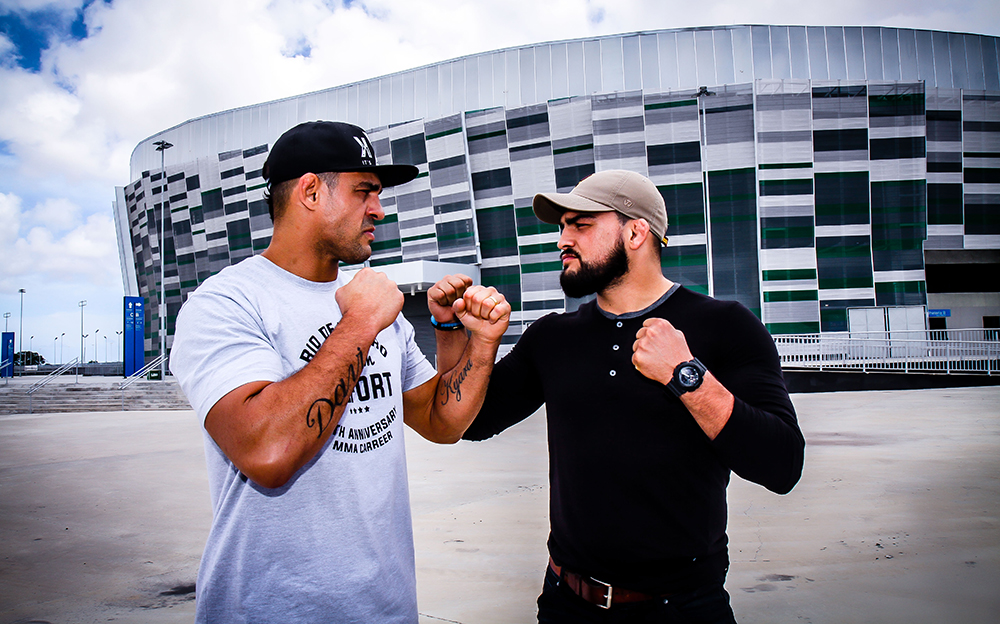 Closing in on his 40th birthday, this bout feels like it could very well be a referendum on Belfort’s future in the Octagon and that alone makes it intriguing.

The Brazilian legend has lost back-to-back outings for the first time in more than a decade and is just 1-3 over his last four bouts, with each of those setbacks coming by way of stoppage. Though his passion for the sport remains unquestionable, Father Time might be catching up to “The Phenom” and it will take a big effort here to prevent people from questioning whether it’s time for Belfort to hang up his gloves.

Gastelum is at almost the complete opposite end of the spectrum as the 25-year-old is just now entering his prime. After continuous struggles to make the welterweight limit, the former TUF winner has once again relocated to middleweight and made a splash in his re-return at UFC 206, dominating and stopping Tim Kennedy in what proved to be the Army Ranger’s final appearance.

Will the veteran turn back the hands of time and win one more or is the upstart going to add another marquee name to his resume and move one step closer to contention?

Things in the welterweight division feel a little fluid and unsettled right now and that makes this co-main event pairing even more interesting than it would be under normal circumstances.

Nelson rebounded from getting “big brothered” by Demian Maia at UFC 194 with a dominant second-round submission win over Albert Tumenov in May that established his floor as a Top 15 talent in the welterweight division. Now the quiet tactician is poised to set about climbing the divisional ladder, and with his unassuming nature and complete arsenal of weapons, Nelson has a chance to make some noise (figuratively, of course) in the year ahead.

Jouban went 3-for-3 last year, culminating in a unanimous decision win over Mike Perry on the FOX event in Sacramento. An entertaining action fighter, the frustratingly handsome 35-year-old gets a grand opportunity to make a jump up the rankings in this matchup with Nelson and given his recent form and proven power, Jouban could very well pick up where he left off in 2016. 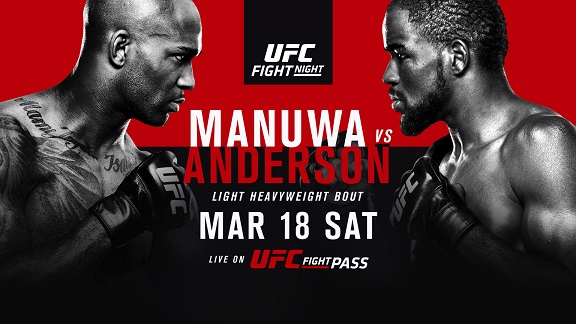 This is a much more interesting and important fight than people are letting on and it will have a major impact on the light heavyweight division.

If not for a sketchy decision loss to Shogun Rua last spring in Curitiba, Anderson would be entering this bout on a five-fight winning streak. As it stands, he’s coming off his first UFC stoppage victory since claiming the TUF 19 light heavyweight crown and continues to show marked improvement every time he steps into the cage.

Manuwa is 5-2 in the Octagon with his only losses coming against Alexander Gustafsson and Anthony Johnson. Last time out, “Poster Boy” posterized Ovince Saint Preux, knocking him stiff with sharp hands along the fence to the delight of the assembled crowd in Manchester. This time, he gets a second opportunity to headline at home in London and a win could put him in line for a date with another of the established threats at the top of the division.