On March 17, the UFC will visit London, England for the 10th time, with the heavyweight bout between Fabricio Werdum and Alexander Volkov headlining the event, which airs live on UFC FIGHT PASS. As you’ll see below, several memorable moments have taken place in this city, and we’ll find out a week from Saturday if this top ten list will need to be extended.

UFC 38
Ian Freeman-Frank Mir (Watch on UFC FIGHT PASS)
The UFC’s first event in London in 2002 was headlined by the welterweight title fight between Matt Hughes and Carlos Newton, but local fans had their eyes on the co-main event, where Ian Freeman defended his home turf against Frank Mir. Mir was the unbeaten hot shot expected to soar to the top of the heavyweight division, and while he eventually got there, on this night at Royal Albert Hall, it was Freeman scoring the stunning upset via first-round TKO and doing it for his father, who was gravely ill with cancer. Sadly, Freeman’s father passed away the night before the bout, and “The Machine” wasn’t told until after the biggest win of his career.

UFC 75
Quinton Jackson-Dan Henderson (Watch on UFC FIGHT PASS)
Nine years after his first UFC appearance, Dan Henderson returned to the Octagon in September 2007 and he came back with a pair of championship belts he won in the PRIDE organization and was eager to add another one to his collection when he faced UFC light heavyweight champion Quinton “Rampage” Jackson in a true MMA SuperFight. Jackson would spoil Hendo’s return, though, winning a hard-fought five-round unanimous decision to retain his title.

UFC 95
Nate Marquardt-Wilson Gouveia (Watch on UFC FIGHT PASS)
There were no titles or title shots on the line when Nate Marquardt faced Wilson Gouveia at UFC 95 in February 2009, and the fight was fairly routine until the end, when Marquardt finished Gouveia with a wild combination of moves that had to be seen to be believed. When viewers called it a finish straight out of the Mortal Kombat video game, that was accurate.

Dan Hardy-Rory Markham (Watch on UFC FIGHT PASS)
After Michael Bisping, Dan Hardy was the leading flag bearer for England in the early days of the UFC’s international expansion, and while he had to dig deep to defeat Akihiro Gono in his Octagon debut in 2008, at UFC 95, “The Outlaw” got the crowd roaring, turning what was expected to be a back and forth firefight into a 69-second knockout win with a single left hook. Two wins later, Hardy was challenging for the welterweight title.

UFC 120
Michael Bisping-Yoshihiro Akiyama (Watch on UFC FIGHT PASS)
It was a rare trifecta for Japanese star Yoshihiro Akiyama in this one, as he made it three for three in Fight of the Night bonuses to start his UFC career. But the night belonged to Michael Bisping, as he put together one of his sharpest performances in defeating Akiyama via unanimous decision.

Mike Pyle-John Hathaway
This comes at the perfect time, given Mike Pyle’s retirement from the sport last Saturday night, and when looking back at his long career, this has to be one of the biggest – if not the biggest - wins “Quicksand” ever delivered, as he handed hot prospect John Hathaway his first pro defeat, showing that while the Brit was good, Pyle had the guile and experience to get the win.

Carlos Condit-Dan Hardy (Watch on UFC FIGHT PASS)
Almost two years to the day after his win over Rory Markham, Dan Hardy returned to the O2 to face fellow welterweight contender Carlos Condit, and again, “The Outlaw” was swinging his left hook. This time though, he hooked at the same time Condit did, and Condit’s got there first, producing one of the most replayed knockouts in UFC history.

UFC on Fuel – Barao vs McDonald
Renan Barao-Michael McDonald (Watch on UFC FIGHT PASS)
Seven months after winning the interim UFC bantamweight title, Brazil’s Renan Barao traveled to London to defend his crown against rising star Michael McDonald, who carried an eight-fight winning streak into the bout and expectations from many that he had the tools to upset the champ. Wasn’t happening, as Barao proved to be a step above “Mayday” as he finished the challenger in the fourth round, earning Submission of the Night honors in the process.

UFC Fight Night – Gustafsson vs Manuwa
Alex Gustafsson-Jimi Manuwa (Watch on UFC FIGHT PASS)
In Alexander Gustafsson’s first fight after his 2013 classic with Jon Jones, he was matched up with London knockout artist Jimi Manuwa in a highly anticipated headliner at the O2. And in a bout that earned these future teammates a Fight of the 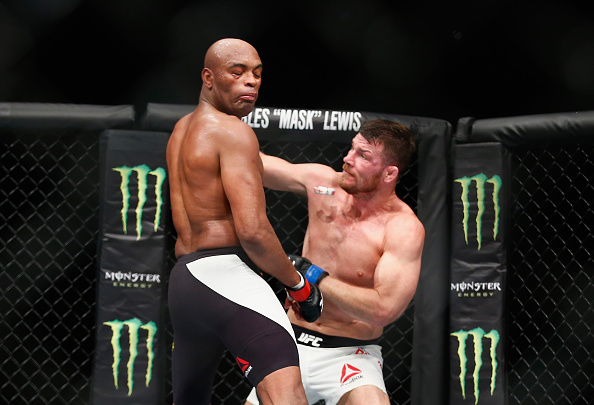 Night bonus and Gustafsson a Performance of the Night check, it was “The Mauler” scoring a second-round knockout that took Manuwa from the ranks of the unbeaten.

UFC Fight Night – Silva vs Bisping
Michael Bisping-Anderson Silva (Watch on UFC FIGHT PASS)
It was a close one in this 2016 main event between two of the best middleweights of this era, but when the dust settled after five rounds, Michael Bisping had thrilled his London fans with a unanimous decision win over Brazilian icon Anderson Silva. Less than four months later, Bisping got a short notice call to face Luke Rockhold for the middleweight title, and he struck gold, taking the belt via first-round knockout.