THE 10: Just starting 2018 with an assortment of awesome fights

2017 just ended, but rather than look back on the year that was, it’s time to start getting a feel for what’s ahead inside the Octagon in 2018, starting with a solid month of action in January.

After the mandatory break to recharge the batteries, business picks up with the promotion’s first trip to St. Louis before shifting to Boston for a massive Pay-Per-View event featuring two colossal championship fights. A week later, the action heads down the eastern seaboard to Charlotte for the first time in nearly eight years for the initial UFC on FOX event of the New Year.

All three cards are flush with compelling fights and intriguing matchups, but here is a selection of contests that really stand out.

Shifting down to featherweight for the first time and fighting on his home turf, Johnson doesn’t get an easy assignment for his debut in the 145-pound weight class as he steps in with one of the most criminally underrated fighters on the entire UFC roster.

Unbeaten since becoming a member of Team Alpha Male and moving to sunny California, Elkins kicked off his 2017 campaign with the most impressive comeback win of the year, rallying from the brink of defeat to topple Mirsad Bektic in March before pushing his winning streak to five with a split decision victory over Dennis Bermudez in July.

Johnson drops to featherweight after a quality run at lightweight that ended with his involvement in one of the best fights of 2017 – a back-and-forth slobberknocker opposite Justin Gaethje at the TUF: Redemption Finale. “The Menace” brings quick hands, good footwork and big power with him to his new division, and if he can halt Elkins’ impressive run of success, he’ll start the year by establishing himself as a contender.

While this welterweight fight has been moved around to a couple different cards before finding a home here, the intrigue surrounding the contest has never declined.

Usman is one of the top emerging talents in the 170-pound weight class, a suffocating wrestler who is a perfect 6-0 in the Octagon and coming off a first-round knockout win over Brazilian veteran Sergio Moraes last time out. The 29-year-old has won 10 straight overall and has been steadily creeping into contention since his breakout turn on Season 21 of The Ultimate Fighter.

Injuries kept Meek from making an appearance in the Octagon last year, but the talented Norwegian wants to make up for lost time by ending Usman’s winning streak and usurping his position in the rankings. The battle axe-carrying “Valhalla” earned a unanimous decision win over Jordan Mein in his promotional debut at UFC 206 and should he push his winning streak to five while turning back a Top 10 talent, Meek will stamp himself as someone to watch in the welterweight division in 2018 and beyond.

January has produced a Fight of the Year contender in each of the last couple years and this seems like a good bet to earn that distinction in 2018.

Choi was last seen claiming 2016 FOTY honors opposite Cub Swanson in Toronto at UFC 206. Though his 12-fight winning streak came to an end that evening, the talented South Korean fighter’s stock went through the roof. As for Stephens, the San Diego-based veteran rebounded from back-to-back losses to put forth his most polished and impressive performance in a number of years when he patiently broke down Gilbert Melendez at UFC 215 in Edmonton.

Featherweight has been undergoing some serious changes in recent months and has never been more competitive. With the rankings in flux and everyone jockeying for position in the title chase, expect these two to come out swinging as they look to start off the year with a bang.

Exhibit B in the “featherweight is deeper than ever” argument is this terrific tilt between divisional upstarts looking to build off strong performances in hopes of cracking the Top 10 in 2017.

Kattar showed up to UFC 214 on two weeks’ notice, riding an eight-fight winning streak into a matchup with Team Alpha Male’s Andre Fili. Fifteen minutes later, his winning streak stood at nine and the New England standout went from unknown newcomer to intriguing dark horse in the loaded division.

After debuting with a unanimous decision win over Tiago Trator late in 2016, Burgos built upon that success last year, going two-for-two in a pair of assignments in his home state of New York to push his record to 10-0. “Hurricane Shane” put it on durable Bostonian Charles Rosa in April at UFC 210 and then followed that up with a clean and clear win over Godofredo Pepey in July.

This is a terrific matchup between two of the top up-and-comers in the division and shouldn’t get overshadowed by the big fights surrounding it on this card.

If Stephens and Choi don’t kick off the year with an instant classic that sets the bar for great fights in 2018, these two bantamweight standouts could certainly do the trick.

While both enter off setbacks, Almeida and Font have established themselves as Top 15 talents in the 135-pound division and perennially entertaining all-action fighters inside the Octagon. They’re a combined 9-4 under the UFC banner with eight of those victories coming by way of stoppage and two of their four losses ending inside the distance as well.

Almeida is a power puncher who has earned a post-fight bonus in each of his five UFC victories, while Font has supplemented his crisp boxing with a rapidly improving submission game. They both love to tuck their chins and throw, so don’t be surprised if this one starts quickly and ends with someone looking up at the lights.

I bet Cormier is hoping that 2018 can just be a nice, normal year featuring a couple successful title defenses and no drama 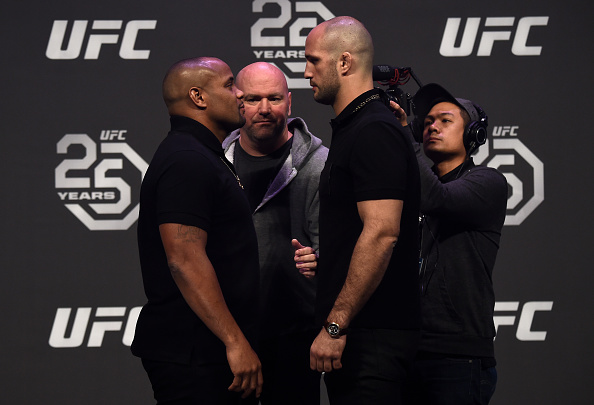 because the last two years have been a mix of elation, chaos and disappointment for the current light heavyweight champion.

After retaining his title with a second-round submission win over Anthony Johnson in April, Cormier ran it back with his chief rival Jon Jones in July, starting well before getting felled by a head kick in the third round. Less than a month later, Jones was flagged for a potential USADA violation and the title reverted back to “DC,” who starts this year the same way he did last year – looking to solidify his standing at the top of the division.

All Oezdemir did in 2017 was go from being a short notice replacement in February to the No. 1 contender by the end of July, rattling off three wins in six months capped by a back-to-back stoppage wins over Misha Cirkunov and Jimi Manuwa that took 70 seconds combined. “No Time” has wasted no time establishing himself as a threat, but now it’s time to see if he has what it takes to topple Cormier.

Stipe Miocic vs. Francis Ngannou for the UFC heavyweight title

Honestly, I don’t even have words to explain how excited I am for this fight. This might be the most compelling heavyweight title fight since Cain Velasquez and Junior Dos Santos collided for the first time as unbeaten standouts and will set the tone for the entire year within the big boy ranks.

Miocic collected his second successful title defense and fourth straight first-round stoppage win by dropping Dos Santos at UFC 211 in May. The Cleveland native has won five straight overall and has a chance to cement himself as one of the best heavyweights in UFC history if he can become the first man to successfully defend the title three times by stopping his surging challenger.

Ngannou began 2017 by knocking out Andrei Arlovski to put himself into the title conversation, but after moving to Las Vegas and taking up permanent residency at the brand new UFC Performance Institute, the Cameroonian standout punched his ticket to a title shot by blistering Alistair Overeem at UFC 218.

This is a clash of the titans and it should be phenomenal for as long as it lasts. And who knows, maybe this will be the start of the next great rivalry in the heavyweight ranks.

With the women’s flyweight division kicking off in earnest in 2018, these two women are looking to get a head start on the competition by logging a victory early in the year.

Undefeated when she arrived in the UFC, Chookagian suffered the first loss of her career via split decision against Liz Carmouche at UFC 205, but bounced back by landing on the happy side of a similar verdict against Irene Aldana in April. Returning to her natural weight class, don’t be surprised if you see the best version of the 29-year-old “Iron Army” member in this one.

Borella debuted in the Octagon back in October, jumping into a short-notice fight with fellow newcomer Kalindra Faria and coming away with a first-round submission win. The 31-year-old Italian is now unbeaten in her last seven and riding a four-fight winning streak, and if she can pick up a second victory in four months, Borella will put herself in great position to get a marquee assignment as action in the UFC’s newest division gets rolling over the next several months.

Tenured light heavyweights lock up in this one as Swedish cult sensation Latifi brings his heavy hands to Carolina to square off with one of the division’s top finishers in Saint Preux.

Latifi only competed once in 2017, but he made it count, getting back into the win column by shutting down and shutting out Australian upstart Tyson Pedro at UFC 215. The hulking physical specimen has won four of his last five and six of eight since making his short notice debut almost five years ago, settling into position in the middle of the division and brandishing the kind of power that makes him a tough out for anybody.

After being the first of Volkan Oezdemir’s three victims in 2017, OSP strung together a trio of victories to enter the New Year on a roll. He earned back-to-back submission wins via Von Flue choke – the second and third time he’s hit the rare finish inside the Octagon – over Marcos Rogerio de Lima and Yushin Okami and then finished his campaign by blasting Corey Anderson with a nasty headkick at UFC 217.

With the some uncertainty at the top of the division as the year begins, an impressive showing for either man in this one could land them a date with a top contender later this year and leave them a win away from potentially challenging for the title in the second half of 2018. 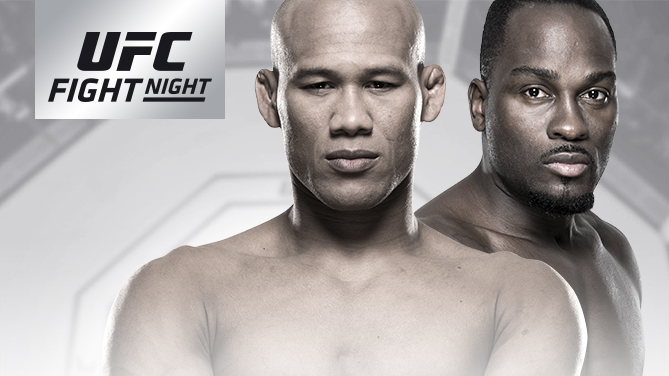 Veteran middleweights renew acquaintances in the first UFC on FOX main event of the year as Jacare and Brunson meet for a second time, nearly six years after sharing the cage with one another under the Strikeforce banner.

After beginning 2018 in title contention and cruising through a “stay busy” fight against Tim Boetsch at UFC 208 in February, Souza landed on the wrong side of things against Robert Whittaker in April as the surging Australian rolled through the Brazilian finisher on his way to claiming the interim title. Back for the first time since that contest, Souza will look to do what he’s done following three of his first four career losses – collect an impressive stoppage win to get headed in the right direction again.

As for Brunson, he rebounded from being on the wrong side of a questionable split decision verdict the same night Souza subbed out Boetsch in Brooklyn, picking up back-to-back first-round knockout wins over Dan Kelly and Lyoto Machida. The Wilmington, North Carolina native has only lost twice in the last four years and has earned each of his last six wins in the first round.

With the reset button being hit at middleweight, this is a pivotal contest between two perennial contenders to start the year and is a fight you don’t want to miss.