Next month, the women’s bantamweight division takes center stage at UFC 224 as champion Amanda Nunes enters the Octagon in search of her third successful title defense when she takes on challenger Raquel “Rocky” Pennington, who ran her winning streak to four with a lopsided decision win over former champ Miesha Tate at UFC 205.

With Nunes and Pennington commanding the spotlight and poised to close out the show in Rio de Janeiro with a bang on May 12, there is no better time than right now to look back at some of the top performances from the ladies of the Octagon.

This is The 10: Best Women’s Fights in UFC History.

The first women’s bout in UFC history, the arrival of Rousey to the biggest stage in the sport was a cultural moment and a crucial point in the growth and development of the organization. Early in the fight, however, it looked as if the unbeaten champion might not enjoy a lengthy reign at the top.

As she had in Strikeforce bouts against championship talents like Marloes Coenen and Sarah Kaufman, Carmouche entered the cage ready to push Rousey to her limits and became the first fighter to really threaten the former Olympic medalist.

Early in the bout, Carmouche took Rousey’s back and clamped on a neck crank that had fans on the edge of their seats and put Rousey on the defensive, but the champion escaped and eventually turned the tables, finishing her first bout in the Octagon the way she had each of her previous five fights – with a submission win via armbar before the opening five minutes had elapsed.

While the first women’s bantamweight fight will always be remembered for its historic significance, the second has a place in the annals of time because of its sheer awesomeness. It’s been just over five years since these two women shared the cage in Las Vegas and it still might be the best scrap on the women’s side of the sport to take place inside the Octagon.

This one was emotional and intense from the jump as Zingano cried on her way to the cage before steeling herself for battle, while Tate entered as game and focused as ever. Through the opening two rounds, the former Strikeforce and future UFC titleholder got the better of things, edging ahead in a pair of close frames, but in the third, Zingano’s aggression and ferocity took over.

An early takedown created a chance to open up with strikes and batter Tate, who showed her trademark heart in continuing to battle through and work to her feet. But as she did, Zingano planted her back on the canvas with a knee with several more following as she once again regrouped and looked to stand, bringing the bout to a sudden, dramatic halt.

You know when filmmakers become massive successes and people go back to check out some of their earlier efforts, only to discover that they were just as terrific before everyone in the world caught on? That’s kind of what this fight feels like to me.

Tucked away as the final preliminary card bout of the evening, Jedrzejczyk and Gadelha would eventually gain recognition as two of the top female fighters in the world and burgeoning stars in the UFC, but on this evening, they were unheralded contenders who went toe-to-toe in an agonizingly close fight where the outcome is still debated to this day.

Jedrzejczyk landed on the happy side of the split decision verdict in the desert and went on to challenge for the strawweight title in her next bout, while the controversial loss never sat well with Gadelha and became the basis for a heated rivalry between the two – one that would come to a head 18 months later.

After 12 consecutive victories, six straight successful title defenses and four wins in a combined two minutes and 10 seconds, Rousey entered this one at the height of her powers and having crossed over into the mainstream, having announced this matchup on Good Morning America.

In front of the largest crowd in UFC history at Etihad Stadium in Melbourne, Australia, she charged into the cage looking to add Holm to her list of vanquished foes, only to find out that the former multiple-time world champion boxer had other ideas.

Holm played the part of the matador perfectly, sidestepping and countering Rousey’s aggressive advances with precision, frustrating the dominant champion from the jump. It quickly became apparent that a changing of the guard atop the women’s bantamweight division was in the offing and less than a minute into the second frame, Holm officially shocked the world, blasting Rousey with a high kick that brought her reign to an abrupt end.

Just as Rousey’s first appearance in the Octagon was a “Where were you when?” moment, so too was the night she was knocked from her throne and the ranks of the unbeaten. For the record, I was at home, watching in amazement like everyone else.

Even though it stands as one of the most unexpected comeback wins in UFC history – and a title changed hands as a result – this one has gotten overshadowed a little because Conor McGregor and Nathan Diaz followed this pair into the cage and delivered another memorable bout with a surprise finish right after them.

That being said, Tate’s come from behind performance her against Holm stands as the perfect representation of her career, as she earned this win through sheer determination and heart… and a pretty deep rear naked choke too.

Entering the fifth round, Holm was up 3-1 on the scorecards and had done an admirable job of keeping the fight standing. In space, she was able to get the better of the striking exchanges and keep Tate at range. The one round where she couldn’t, Tate controlled the action on the canvas, pressuring with offense and hunting for a choke.

With two minutes left in the final frame, Tate spun Holm to the floor and stuck to her back like glue as the champion looked to scramble free. As Holm stood, Tate fished her forearm under the neck and maintained control as Holm tried to shake her off. Falling to the canvas, Tate tightened her squeeze and with just 90 seconds remaining in the contest, Holm went out and Tate had completed one of the most improbable come-from-behind victories in UFC history. 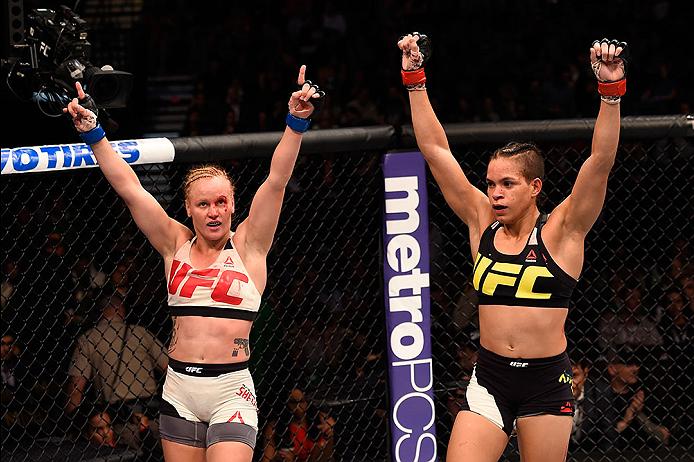 If Tate’s bout with Holm has been slightly overshadowed by the subsequent Diaz-McGregor clash and the rivalry it spawned, this bout was initially buried coming out of UFC 196, but that doesn’t change that it was a terrific back-and-forth battle.

Nunes entered on a two-fight winning streak and brandishing fight-changing power. Shevchenko arrived off a short-notice decision win over former Strikeforce champ Sarah Kaufman in her promotional debut. In the early going, Nunes rushed out to a lead, controlling the action with her grappling and putting it on the UFC newcomer.

In the third, however, Shevchenko rallied, scoring a takedown of her own early before outworking the tired Brazilian on the feet for the remainder of the frame. While Nunes rightfully took home the close decision win, the feeling on press row was that Shevchenko had all the momentum and things might have been different if this were a five-round fight.

We eventually got to see that play out as Nunes rose to the top of the division and Shevchenko emerged as the No. 1 contender, leading to their close championship showdown at UFC 215 in Edmonton, which saw “The Lioness” retain her title by split decision.

While their first fight transpired in the shadows, their second encounter had the full attention of the MMA audience and did not disappoint, as the championship headliners turned in one of the best bouts of all-time.

Gadelha came out hard and fast, pressing the action against Jedrzejczyk and controlling the opening 10 minutes with intense pressure, strong grappling and sharp boxing. After the challenger controlled the opening portion of the middle stanza, Jedrzejczyk worked her way out of scrambles and strolled back to the center of the cage with confidence, motioning for her Brazilian rival to meet her on the feet.

It proved to be a clear turning point in the fight as from there out, Jedrzejczyk was in complete control, distancing herself from Gadelha down the stretch en route to a unanimous decision victory and a 2-0 advantage in head-to-head competition.

Although they opened the main card, Andrade and Hill combined to steal the show during this Super Bowl Saturday event in Houston, Texas, as the strawweight contenders delivered 15 minutes of non-stop action in this 2017 classic.

After a solid run in the bantamweight ranks, Andrade had proven herself as a force in the 115-pound weight division with consecutive stoppage wins over Jessica Penne and Joanne Calderwood, while Hill returned to the Octagon following a 4-0 run under the Invicta FC banner in 2016 which saw her win and defend the company’s strawweight title.

These two came out swinging from the start and never let off the throttle, with Andrade constantly pressing forward (as she does) and Hill refusing to yield (as she does), resulting in a wildly entertaining affair that earned the Brazilian a victory and shot at the title and Hill some long overdue recognition as one of the top talents in the division.

The first of two 2018 offerings on this list, Reneau’s win over McMann really played out as a tale of two fights.

In the opening act, the Olympic silver medalist and former title challenger was in complete control. McMann took the fight to the canvas a minute into the first round and kept it there the rest of the way, advancing to a mounted crucifix and dominating the action for nearly three full minutes.

In the second, Reneau kept it standing until she stung McMann with a clean right hand that prompted a desperation 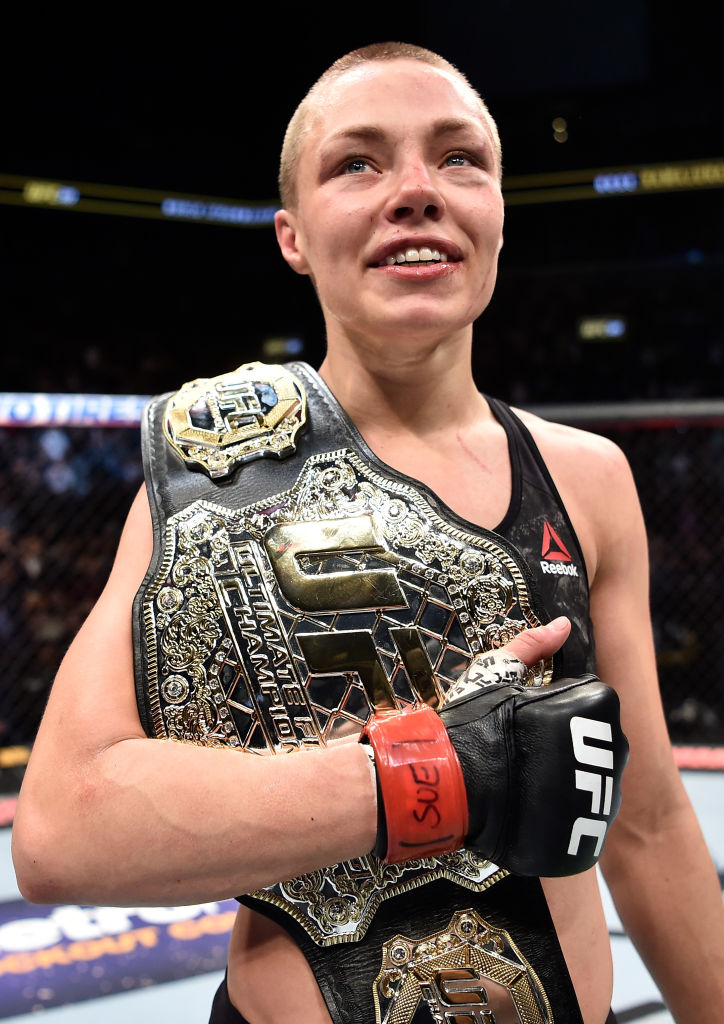 takedown attempt from her dazed opponent. While McMann eventually put Reneau on her back, the 40-year-old contender instantly threw up her legs to attack with a triangle and as McMann looked to defend the series of elbows coming her way, “The Belizean Bruiser” tightened her choke and secured the tap to complete her comeback.

After unseating Jedrzejczyk from the strawweight throne at UFC 217, many questioned if Namajunas’ victory was a perfect storm situation – a case where she had her absolute best performance while the champion stepped into the Octagon at less than 100 percent.

Five months later, Namajunas proved she is the genuine article, starting hot like she did the first time around before rallying in the final frame to salt away her first successful title defense.

The overall impact and importance remain unknown because it only happened a few weeks ago. In the moment, it was an outstanding contest that cemented Namajunas’ standing atop the division and showed her championship mettle, but it could very well take on greater significance down the line depending on what transpires from here on out.