In A Year Full Of Awesome Submissions, These 10 Tapouts Stood Out The Most
By Thomas Gerbasi, on Twitter: @TGerbasi • Dec. 22, 2021

What were the best submissions of 2021? Read on for our picks (and how we reported on them on fight night) as the highly unofficial awards season continues. 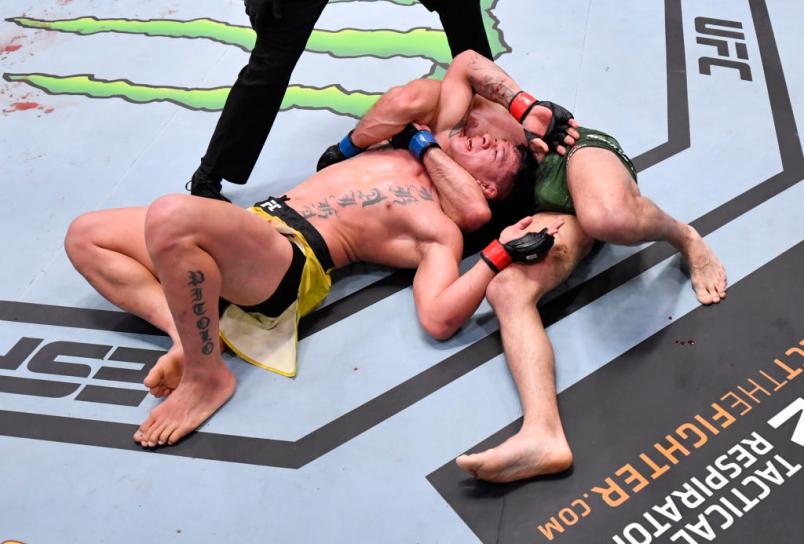 Julian Marquez secures a choke submission against Maki Pitolo in their middleweight fight during the UFC 258 event at UFC APEX on February 13, 2021 in Las Vegas, Nevada. (Photo by Jeff Bottari/Zuffa LLC)

Julian Marquez secures a choke submission against Maki Pitolo in their middleweight fight during the UFC 258 event at UFC APEX on February 13, 2021 in Las Vegas, Nevada. (Photo by Jeff Bottari/Zuffa LLC)

Sidelined due to injury since July 2018, Julian Marquez scored an exciting come from behind victory over Maki Pitolo, submitting his opponent in the third round of their middleweight bout.

Pitolo went after Marquez as soon as the fight began, and after landing a couple hard shots, the two clinched against the fence, with Pitolo landing a flush elbow before taking the fight to the mat. There, the Hawaiian controlled the action for a long spell, and even when the two stood, he continued to wear on his foe with his grappling until Marquez nearly locked in a guillotine choke. Pitolo got loose, but he ate a couple hard shots just before the round ended.

An inadvertent low kick by Marquez brought a momentary halt to the action early in round two, and when the fight resumed, the two traded until Pitolo scored a pair of takedowns. As he looked for a third, Marquez locked up a guillotine choke, and while Pitolo escaped, he found himself in trouble on the mat until he reversed position and then controlled the fight from the top for the rest of the frame.

Marquez unloaded on Pitolo early in the final round while also looking for an opening for his guillotine choke, but the Hawaiian weathered the storm, then took the fight back to the mat. Soon, he had a choke in, but Marquez was able to get loose and find a spot for his strikes. With a little over a minute left, he rattled Pitolo with his strikes, and as the fight went to the mat, he sunk in the anaconda choke that forced Pitolo to tap out at 4:17 of round three.

It was another flawless victory for unbeaten welterweight phenom Khamzat Chimaev, who was in control from the opening seconds of his bout against Li Jingliang until he submitted him later in the first round, moving to 10-0 in the process.

Chimaev opened the fight with a takedown of the No.11-ranked Li (18-7), and after some steady groundwork, he flattened his foe out just before the midway point of the round, and after a series of strikes he sunk in the rear naked choke that ended the fight at the 3:16 mark of the opening stanza. 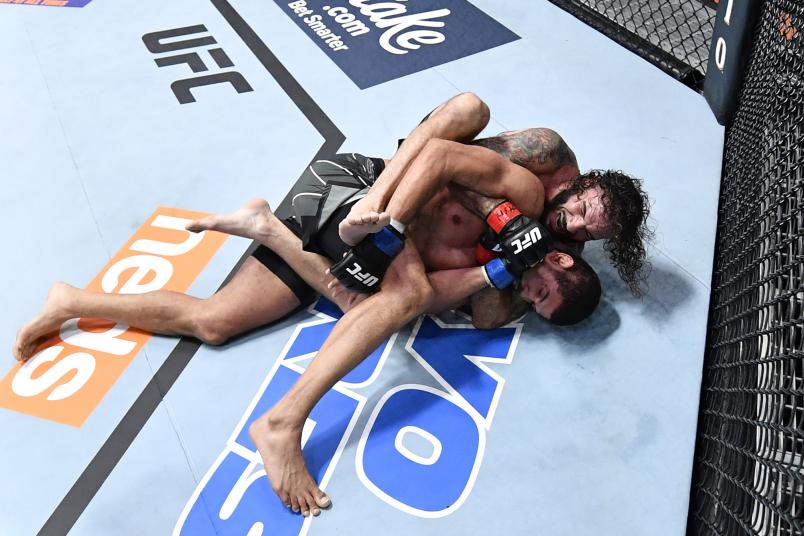 Roaring back from a near stoppage against Leonardo Santos, Clay Guida submitted the Brazilian Jiu-Jitsu black belt in the second round of their lightweight bout.

The 39-year-old Guida got hurt by a body kick in the first minute and Santos went on the attack, drilling his opponent with a barrage of strikes from all angles. Referee Keith Peterson allowed the fight to continue, and Guida ultimately recovered and got back to his feet, stalking a now winded Santos. Sensing this, Guida pressured Santos, using his strikes to set up a slam with a minute left. Santos tried to hold on, but Guida’s ground-and-pound assault kept the fight on the mat until the horn.

Guida rushed out of his corner to begin round two and he dragged Santos to the canvas, where he fired knees until he locked in a rear naked choke that produced a tap out at the 1:21 mark. 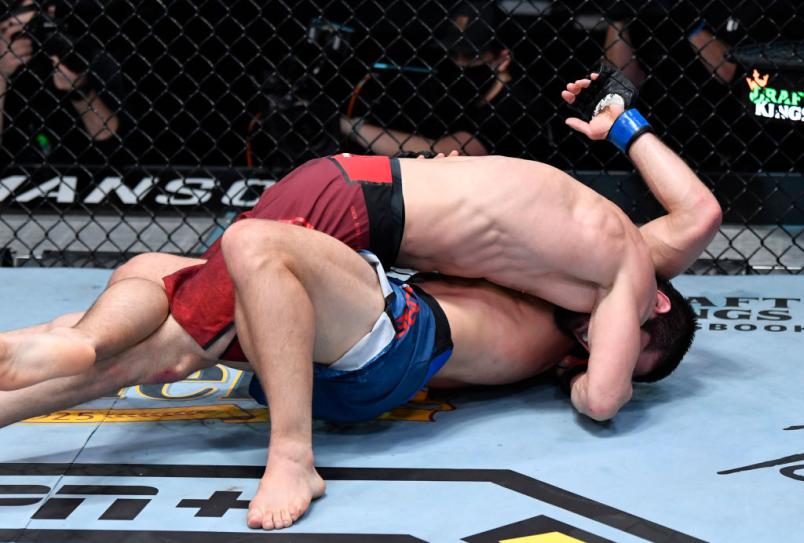 Islam Makhachev secures a submission against Drew Dober in their lightweight fight during the UFC 259 event at UFC APEX on March 06, 2021 in Las Vegas, Nevada. (Photo by Jeff Bottari/Zuffa LLC)

Islam Makhachev secures a submission against Drew Dober in their lightweight fight during the UFC 259 event at UFC APEX on March 06, 2021 in Las Vegas, Nevada. (Photo by Jeff Bottari/Zuffa LLC)

Lightweight contender Islam Makhachev delivered one of his most impressive performances to date, as he submitted Drew Dober in the third round.

A minute into the fight, Makhachev got his first takedown, and he patiently worked to improve his position, getting into side control with 90 seconds remaining. Dober tried to scramble his way free, but Makhachev wasn’t having it, and an armbar attempt nearly ended the fight just before the horn.

The bout went right back to the mat to begin round two, and it was another grappling clinic from Makhachev, who completely dominated the action. Nothing changed in the third, but after flooring his foe again, he locked in the arm triangle that forced Dober to tap out at the 1:37 mark of round three. 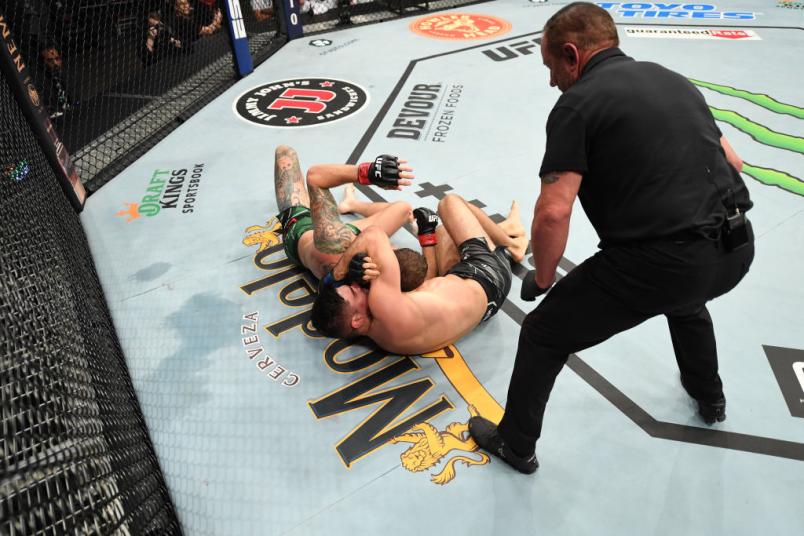 Vicente Luque of Brazil submits Michael Chiesa in their welterweight bout during the UFC 265 event at Toyota Center on August 07, 2021 in Houston, Texas. (Photo by Josh Hedges/Zuffa LLC)

Vicente Luque of Brazil submits Michael Chiesa in their welterweight bout during the UFC 265 event at Toyota Center on August 07, 2021 in Houston, Texas. (Photo by Josh Hedges/Zuffa LLC)

Vicente Luque continued to strengthen his case for a welterweight title shot, as he impressively submitted Michael Chiesa in the first round to extend his winning (and finishing) streak to four.

Using lateral movement to start, Chiesa forced Luque to chase him, and when the Brazilian tagged him, Chiesa scored a slick takedown. On the mat, Chiesa nearly locked in a choke, but Luque got free and then turned the tables, sinking in the D’Arce choke that forced a tap out at 3:25 of the opening round. 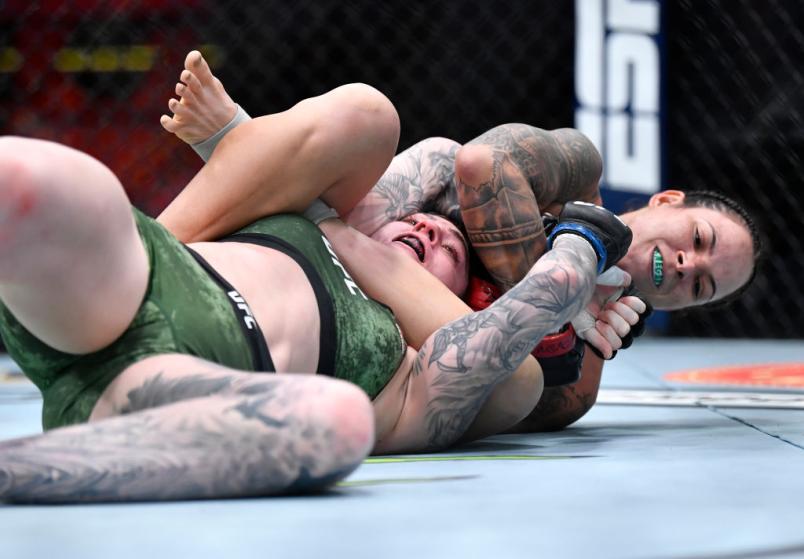 Amanda Nunes of Brazil secures an arm bar submission against Megan Anderson of Australia in their UFC featherweight championship fight during the UFC 259 event at UFC APEX on March 06, 2021 in Las Vegas, Nevada. (Photo by Chris Unger/Zuffa LLC)

The G.O.A.T. of women’s combat sports did it again in the UFC 259 co-main event, as Amanda Nunes successfully defended her featherweight title with a first-round submission victory over Megan Anderson.

A minute in, a right hand stung Anderson, and Nunes followed up by putting the fight on the mat. What followed was a tight armbar, forcing a tap out by the challenger at 2:03 of the opening round.

In a rematch of a December 2020 classic that ended in a draw, Brandon Moreno made history on Saturday night with a third-round submission of Deiveson Figueiredo that earned him the world flyweight title and saw him become the first Mexico native to win a UFC title.

“I worked so hard for this,” said the 27-year-old Tijuana native.

The first round was all Moreno, whose busy and confident attack seemed to catch Figueiredo off-guard. And with under two minutes left, the suddenly aggressive Figueiredo who got dropped by a Moreno jab. Moreno looked for the finish, but the champion cleared his head and got back to his feet to end the round on his feet.

After eating another stiff jab to start the second frame, Figueiredo scored a takedown and began to work on the mat. But thanks to some good defense, Moreno escaped and returned to his feet, where he locked up with the Brazilian and then scored his own takedown, keeping Figueiredo grounded for the rest of the round.

The striking exchanges heated up in the third, but in the second minute, Moreno surprised Figueiredo with a takedown and then took the champion’s back as he looked for a rear naked choke. And with over three minutes left, that wasn’t a good thing for Figueiredo, who was forced to tap out to the choke at 2:26 of round three.

It was a wild one for as long as it lasted, but in the UFC 260 co-main event, Vicente Luque emerged victorious, submitting former welterweight champion Tyron Woodley in the first round.

Woodley raced out of his corner and after missing with a big right hand, he bulled Luque into the fence. The two traded positions in the clinch until separating, and Woodley was much more aggressive than he has been in recent fights. With a little over two minutes left, Woodley rattled Luque with a right hand, but Luque answered with a right of his own that staggered the former champ. On wobbly legs, Woodley fired back and tagged his foe, but once Luque got the fight to the mat, he closed the show, sinking in the D’Arce choke that forced a tap at 3:56 of round one. 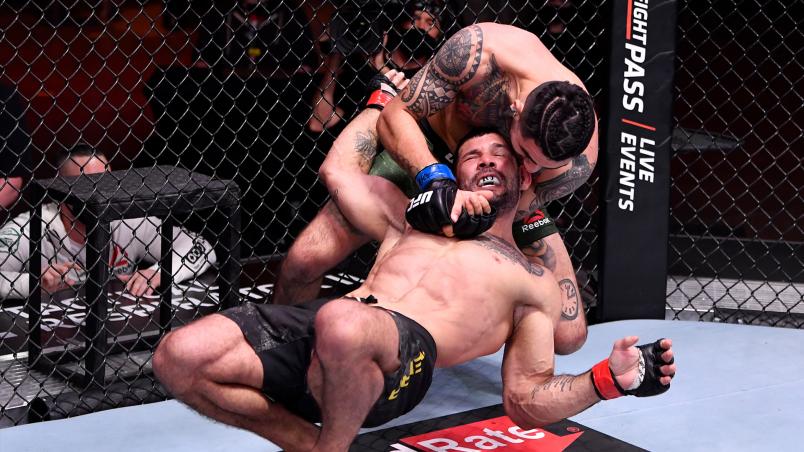 Vieira dropped Hernandez to the mat within 20 seconds, and moments later he had Hernandez in deep trouble as he moved into the mount. Hernandez hung tough, forcing Vieira to look for an arm before the two rose to their feet. Vieira kept the pressure on against the fence, and once they broke with under two minutes left, Hernandez fired off strikes, rocking Vieira before attempting a choke. Again, they separated, and Hernandez had Vieira hurt and on the verge of a stoppage before the horn saved the Brazilian.

Hernandez kept the heat on in round two, and he continued to rock the exhausted Vieira, cutting him with an elbow before getting him to the mat and stunning the MMA world by submitting the decorated jiu-jitsu black belt with a guillotine choke at 1:53 of the second frame. 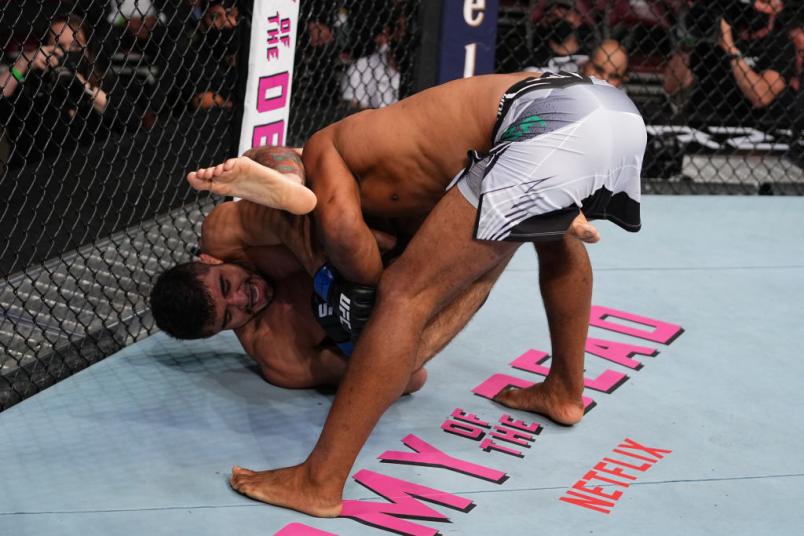 Middleweight up and comer Andre Muniz may have made the move from prospect to contender, as he submitted perennial standout Ronaldo “Jacare” Souza in the opening round.

A minute into the fight, Souza put Muniz on the deck and began throwing hard strikes until Muniz found his way upright and soon returned the favor with his own takedown. Souza rose quickly, but Muniz stayed locked on for a brief spell. After putting the fight back on the mat, Muniz locked up his foe’s arm and ended matters, with Souza suffering a broken arm in the process. The official time of the armbar finish was 3:59 of the first round.