What were the biggest knockouts of 2021? Read on for our picks (and how we reported on them on fight night) as the highly unofficial awards season continues. 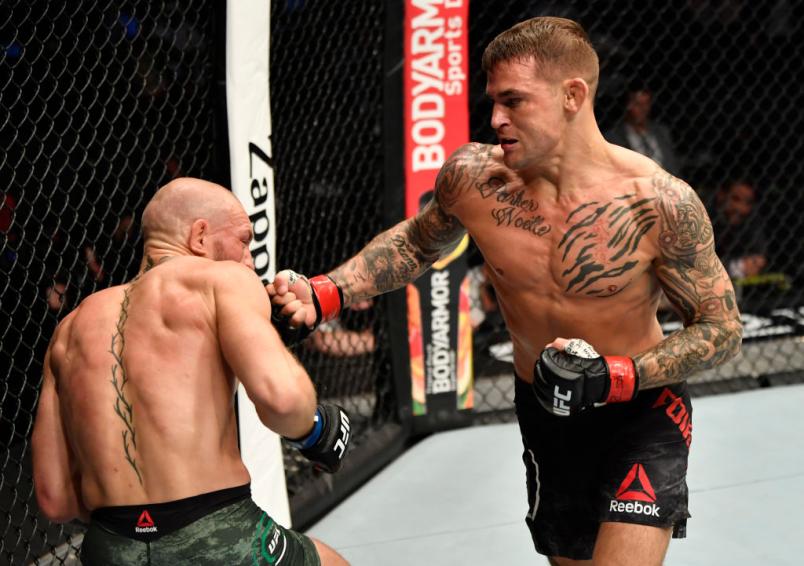 Watch Poirier Get His Revenge On UFC Fight Pass

Derrick Lewis took a little while to get into a rhythm in his UFC Fight Night main event against Curtis Blaydes, but once he landed a flush shot in the second round, the fight was over, and the heavyweight contender had his fourth consecutive victory as he tied Vitor Belfort for most knockouts in UFC history.

Houston’s Lewis struck first with a right hand as Blaydes closed the distance in the opening minute, but in a subsequent sequence it was Blaydes getting the better of the exchange. In the second half of the round, Lewis threw a couple kicks to keep Blaydes at bay, but it was “Razor” consistently scoring well in the striking exchanges as his punches and kicks were on target, except for an inadvertent eye poke late that brought a brief halt to the action.

Blaydes came out throwing again in round two, but a subsequent takedown attempt was turned away by Lewis. But just when it seemed like the Illinois native was about to start taking control, he shot in and a single right hand from Lewis froze him and put him on the canvas. Two follow-up shots later and referee Herb Dean had stopped the fight. The official time was 1:26 of the second round. 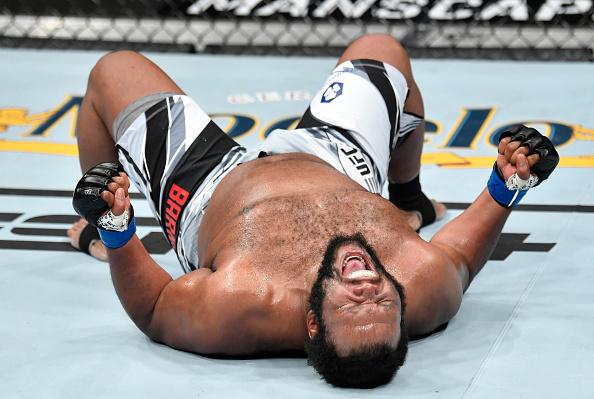 Chris Barnett reacts after his TKO victory over Gian Villante in their heavyweight fight during the UFC 268 event at Madison Square Garden on November 06, 2021 in New York City. (Photo by Jeff Bottari/Zuffa LLC)

Chris Barnett blew the roof off of Madison Square Garden on Saturday night, putting Gian Villante on the deck with a spinning wheel kick to the head, swarming the New Yorker with unanswered strikes to earn the finish midway through the second round.

The duo traded kicks at range throughout the opening five minutes and seemed poised to do the same early in the second, until Barnett pivoted, spun, and connected, capping the performance with a celebratory flip. Given the chance to speak with Joe Rogan following the victory, Barnett called on the MSG audience to give it up for the retiring Villante before breaking out a celebratory dance before exiting the Octagon.

Just a terrific performance in the cage and on the mic from “Beast Boy” as he secures his first UFC victory. 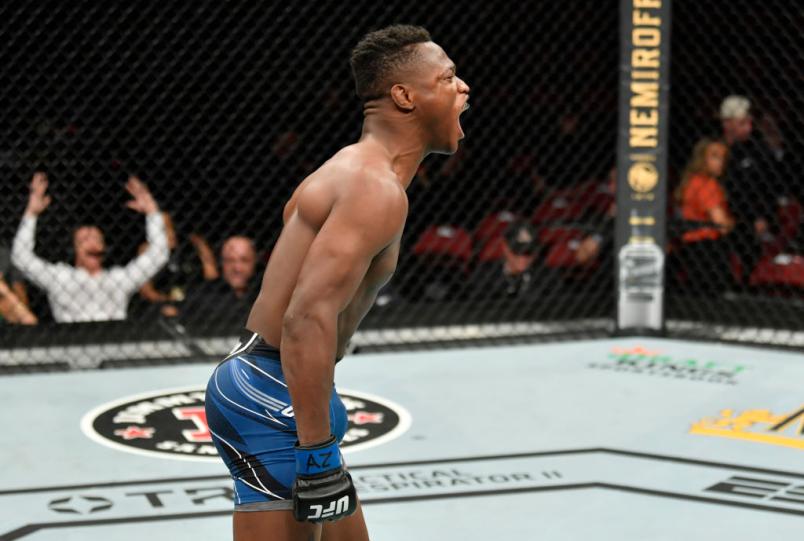 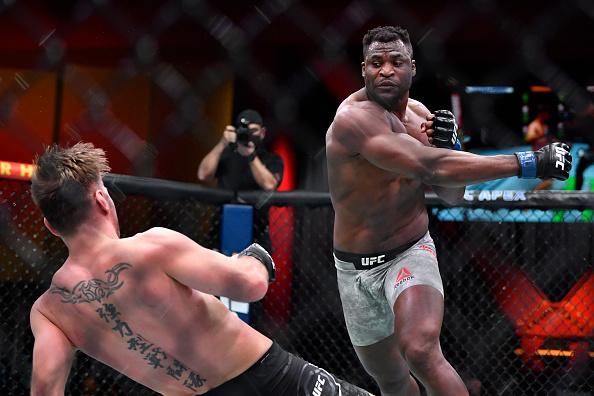 It took a little over three years longer than many expected, but Francis Ngannou is now the UFC heavyweight champion of the world after a devastating second-round knockout of Stipe Miocic in a rematch that headlined UFC 260 at the APEX in Las Vegas.

In their first bout in January 2018, Miocic shut Ngannou out over five rounds, but in the five fights since, the Cameroon native has turned from a dangerous knockout artist into a well-rounded mixed martial artist. In the end, though, it was the power of “The Predator” that forced a changing of the guard in the heavyweight division.

Ngannou struck first with an overhand right in the second minute, but Miocic was unbothered by it, and moments later, the champ shot for a takedown. Ngannou defended the takedown and landed some ground strikes, following up with a head kick when the two rose and separated. Miocic’s offense consisted mainly of leg kicks, making it an Ngannou round.

Early in round two, a left hand dropped Miocic, and while the Cleveland native rose and swung back, landing a hard right, as he rushed in to follow up, a short left put him back on the deck, with a follow-up strike bringing in referee Herb Dean to stop the fight at :52 of round two. 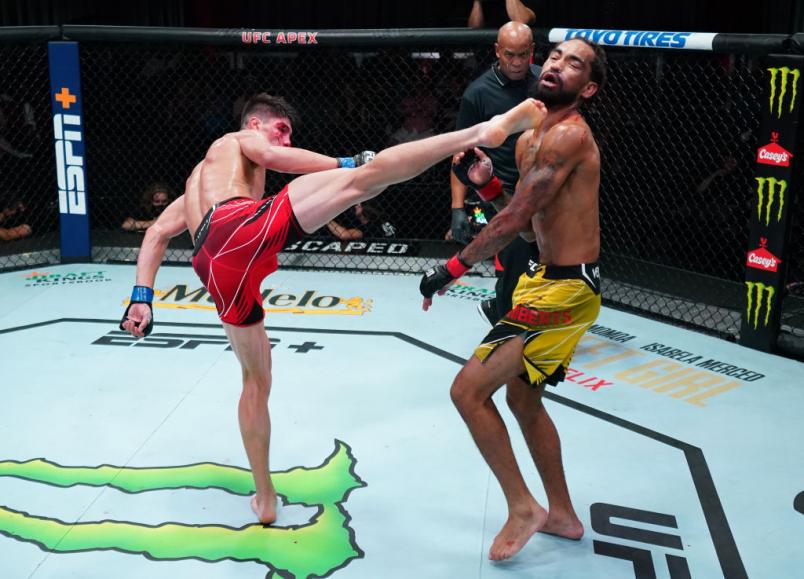 Ignacio Bahamondes of Chile knocks out Roosevelt Roberts with a kick in a lightweight fight during the UFC Fight Night event at UFC APEX on August 21, 2021 in Las Vegas, Nevada. (Photo by Chris Unger/Zuffa LLC)

Ignacio Bahamondes of Chile knocks out Roosevelt Roberts with a kick in a lightweight fight during the UFC Fight Night event at UFC APEX on August 21, 2021 in Las Vegas, Nevada. (Photo by Chris Unger/Zuffa LLC)

The towering lightweights got after it right away, trading long jabs and leg kicks in the center of the Octagon early in the opening stanza, each man getting home with quality shots and both working at a steady clip. Bahamondes started controlling the engagement, pressing the action and backing Roberts down, prompting “The Predator” to grab a single leg, forcing the young Chilean to defend. After working back into space, Bahamondes continued to lead the dance, throwing at a steadier clip and with greater variety through to the end of the round.

It was more of the same to start the second, with Bahamondes coming forward behind a quality mix of punches and kicks, attacking from different stances and to different levels. While Roberts fired back steadily and opened Bahamondes up with his jab, the 23-year-old UFC sophomore was undeterred, staying in Roberts’ face, continuing to fire off a high volume of attacks. Though he finished the round wearing a crimson mask courtesy of cuts at both ends of his brow line, Bahamondes was in control heading into the final round.

Early in the third, Bahamondes hurt Roberts with a straight right hand to the body, prompting a panicked takedown attempt. After defending and calling Roberts back to his feet, Bahamondes hurt him again, the sequence repeating itself. After continuing to pepper Roberts throughout the round, Bahamondes heard the “10-second clappers” and let fly with a spinning wheel kick, catching Roberts clean on the jaw, knocking him out cold.

Just an incredible way to close out an impressive performance by the recent Dana White’s Contender Series graduate and a memorable way for Bahamondes to earn his first UFC victory.

While being introduced by Bruce Buffer, Rose Namajunas chanted “I’m the best,” to herself, and in 78 seconds, she proved it, as she knocked out Zhang Weili to regain the UFC strawweight title.

After the two fighters moved around the Octagon to get acclimated to the Octagon, Namajunas landed a flush left kick to the head that dropped Zhang hard to the mat. Namjunas went in for the finish and after a couple hammerfists, she got it, with referee Keith Peterson stepping in at 1:18 of round one.

Watch Rose Namajunas Get Her Belt Back On UFC Fight Pass

In the UFC Fight Night co-main event, Cory Sandhagen delivered a statement to the top of the bantamweight division, as he knocked out Frankie Edgar in the first round.

Edgar’s trademark pressure was in evidence as the bout opened, but with perfect timing, a jumping right knee caught Edgar flush on the jaw, sending him down to the canvas face first. There was no need for any follow-up from Sandhagen, with referee Keith Peterson halting the bout at 28 seconds of the opening round. 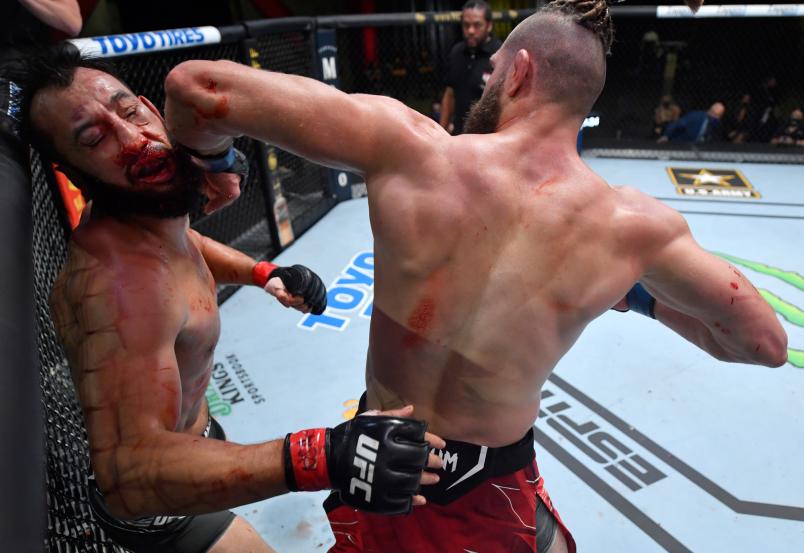 Jiri Prochazka of the Czech Republic knocks out Dominick Reyes in a light heavyweight bout during the UFC Fight Night event at UFC APEX on May 01, 2021 in Las Vegas, Nevada. (Photo by Jeff Bottari/Zuffa LLC) 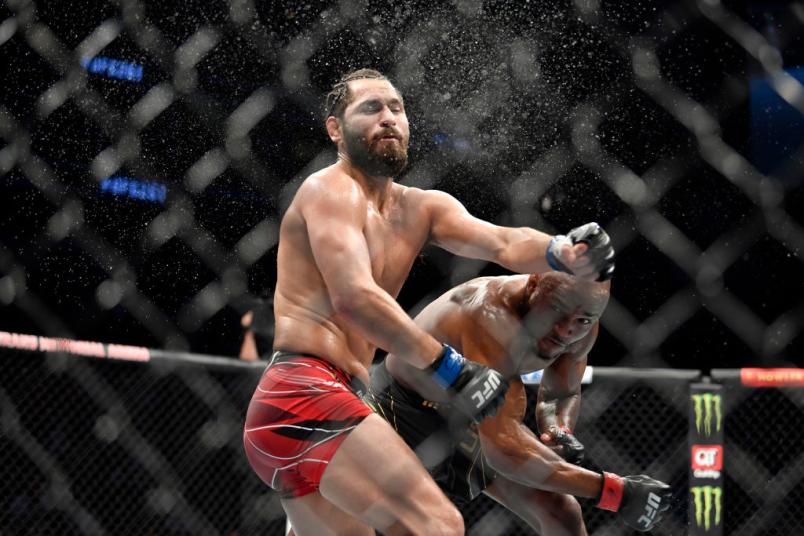 After a decision win over Jorge Masvidal last year, UFC welterweight champion Kamaru Usman ran it back with “Gamebred” in the main event of UFC 261, and this time, he didn’t need the judges to get involved, as a second-round knockout emphatically ended their rivalry.

Masvidal fired off leg kicks to start the bout, but Usman got the first big shot off, drilling the challenger with a right hand. Masvidal shook off the blow but after a missed knee, he was taken down by the champion. Masvidal stayed busy with elbows from the bottom and he mae it back to his feet with a little over a minute to go. Usman landed a couple more flush shots, answered by a knee at the end of the round.

And while Masvidal was smiling and confident as the second round began, Usman closed the show in devastating fashion, with a crushing right hand that dropped Masvidal to the canvas. A couple follow-up shots later, the bout was over, as referee Herb Dean stopped the fight at the 1:02 mark of round two.