The highly unofficial UFC.com best-of season continues with the biggest knockouts of 2020 and how we called them on fight night… 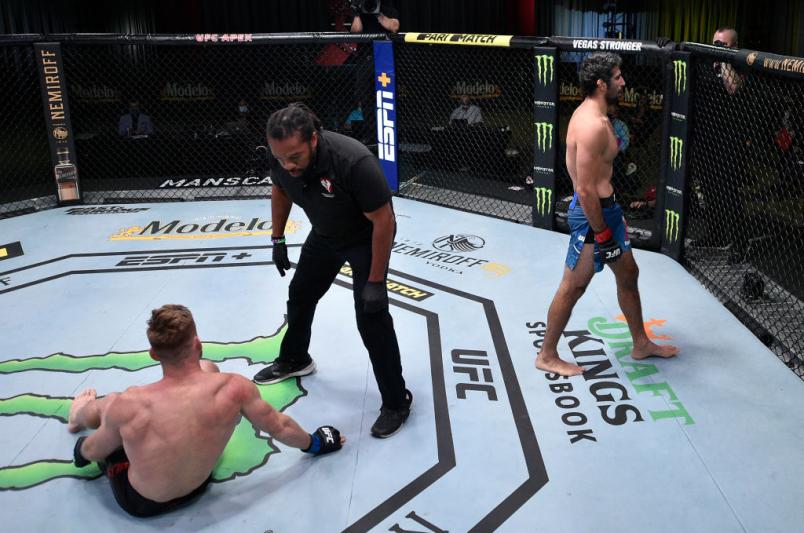 AUGUST 08: (R-L) Beneil Dariush of Iran reacts after his knockout victory over Scott Holtzman in their lightweight fight during the UFC Fight Night event at UFC APEX on August 08, 2020 in Las Vegas, Nevada. (Photo by Chris Unger/Zuffa LLC)

After some high-impact standup exchanges punctuated by a couple inadvertent fouls, Dariush attempted to get the fight to the mat but was turned away by Holtzman. Moments later, Dariush drilled Holtzman with a flush knee that nearly ended the fight. Holtzman seemingly recovered, but Dariush kept pressing, and out of nowhere he threw a spinning backfist. The forearm landed flush on Holtzman and sent him to the canvas, bringing in referee Herb Dean to halt the bout at 4:38 of round one. 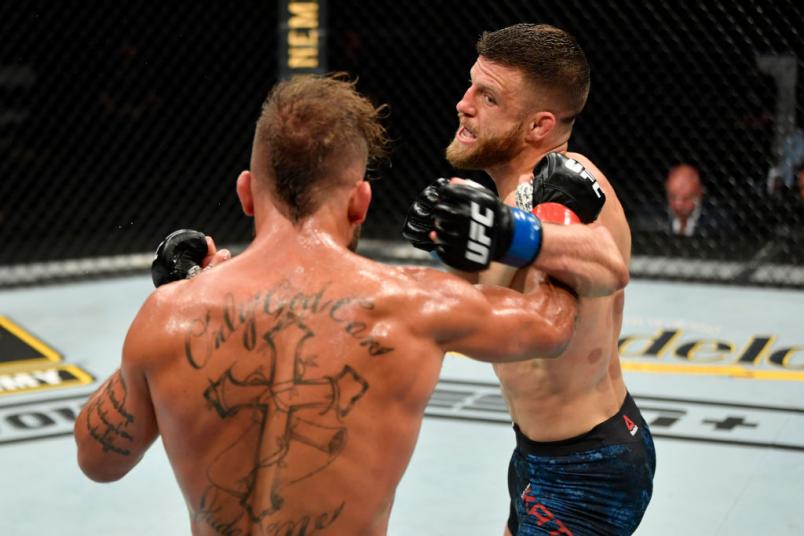 MAY 09: (R-L) Calvin Kattar punches Jeremy Stephens in their featherweight fight during the UFC 249 event at VyStar Veterans Memorial Arena on May 09, 2020 in Jacksonville, Florida. (Photo by Jeff Bottari/Zuffa LLC)

After all the delays, Calvin Kattar and Jeremy Stephens finally got to throw hands and it was worth the wait, with the two featherweight contenders battling tooth and nail until Kattar scored a second-round knockout of the “Lil’ Heathen.”

Stephens got off to a fast start, peppering Kattar with kicks as he stalked the New Englander. As the round wore on Kattar began to find his range with his punches to the body and head, but Stephens’ leg attacks were still getting through. Kattar did drill Stephens with a right hand late, reminding the Iowan that he wasn’t going anywhere.

Kattar began pounding away at Stephens’ leg in the second, and soon both fighters were switching stances in order to stay out of harm’s way. That left the two to trade punches, and Kattar’s shots were finding a regular home. With 2:20 left, a right elbow sent Stephens crashing to the deck. A left elbow on the mat cut Stephens, and referee Jason Herzog moved in to halt the fight at 2:42 of round two. 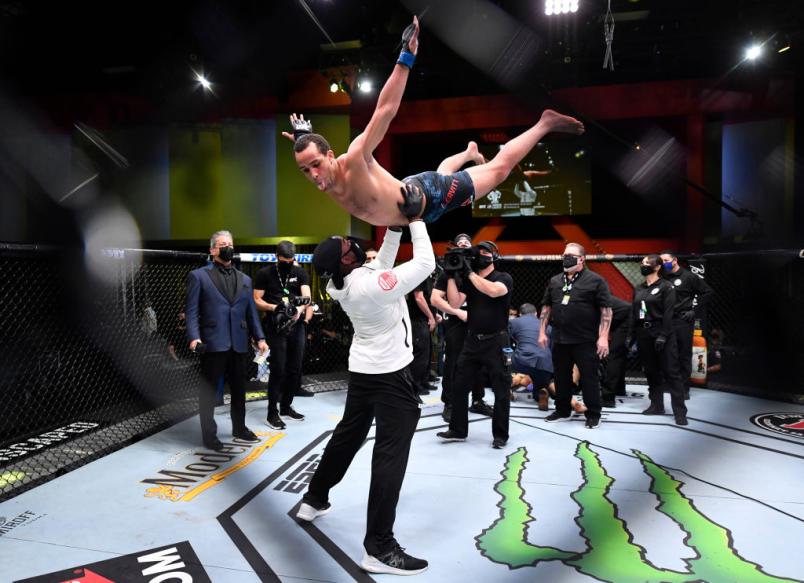 DECEMBER 05: Jordan Leavitt reacts after his knockout victory over Matt Wiman in a lightweight bout during the UFC Fight Night event at UFC APEX on December 05, 2020 in Las Vegas, Nevada. (Photo by Chris Unger/Zuffa LLC)

Recent Dana White’s Contender Series winner Jordan Leavitt made an immediate impact in his UFC debut, knocking out veteran Matt Wiman in the first round of their lightweight bout.

Leavitt looked for the takedown immediately, and as he did, Wiman locked up with his foe. But as Leavitt settled in to bring it to the mat, he slammed Wiman, knocking the veteran out immediately. The official time of referee Chris Tognoni’s stoppage was 22 seconds of round one.

Beneil Dariush made it four consecutive wins in a wild one, as he stopped Drakkar Klose in the second round of their lightweight bout.

Klose (11-2-1) landed some hard shots to begin the fight, but Dariush (18-4-1) quickly nullified his offense with a takedown. Klose got back up quickly, but Dariush stayed locked on while standing and he took his foe’s back and stayed there until the end of the round, nearly locking in a choke in the process.

In the second, Klose attacked Dariush’s legs, and when he moved upstairs, he rocked the Californian. But as Klose went in for the finish, he got reckless and was caught with a right hand that wobbled his legs. Now it was Dariush’s turn, and a single left hand ended matters, with referee Jason Herzog stepping in at 1:00 of round two. 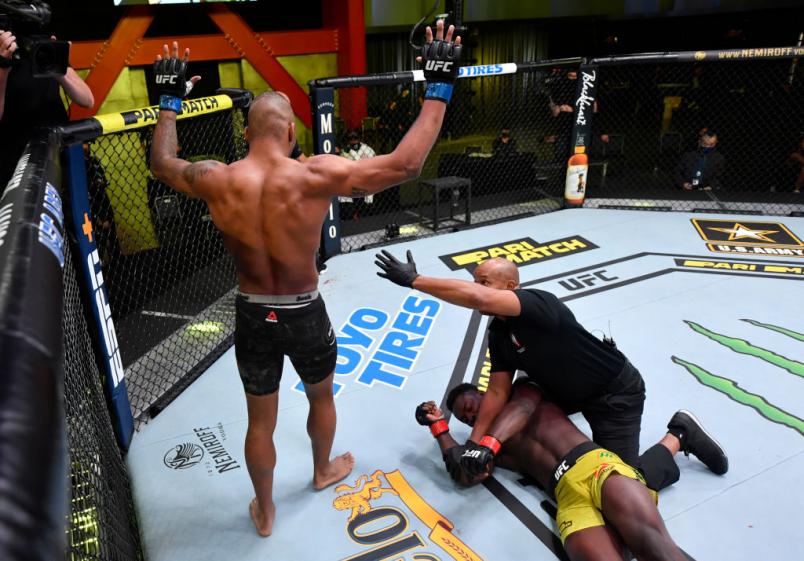 The chaos continued in the UFC Fight Night co-main event, as Detroit’s Khaos Williams scored a second consecutive quick knockout, this one over Abdul Razak Alhassan, making it a total combined fight time of 57 seconds for “The OxFighter” in the Octagon.

Williams opened the fight with a trio of kicks to the leg, and then out of nowhere, he unleashed a straight right hand that landed flush on the jaw, knocking Alhassan out. The official time of referee Mark Smith’s stoppage was 30 seconds. 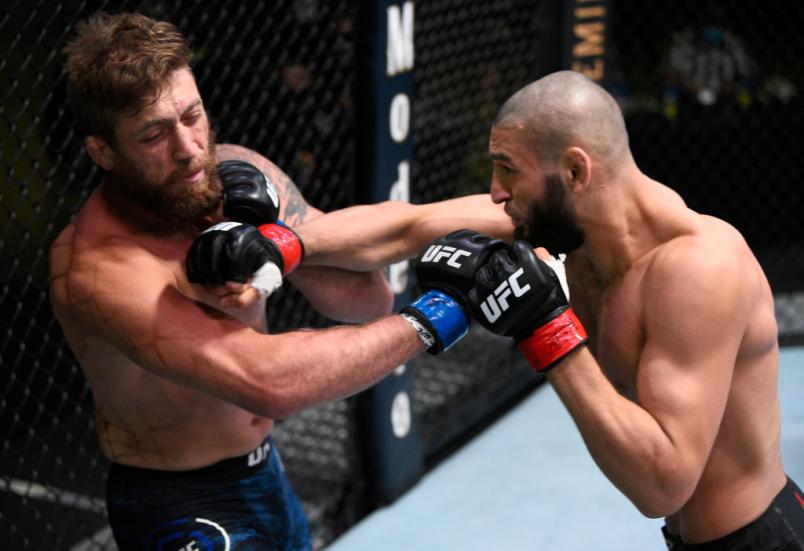 If anyone doubted that Swedish phenom Khamzat Chimaev was for real, he silenced those doubters in 17 seconds, the time it took to knock out Gerald Meerschaert and notch his third UFC win in 66 days.

Chimaev pressured Meerschaert at the start, but instead of shooting a takedown, he blasted his foe with a flush right hand that put the middleweight veteran down and out. 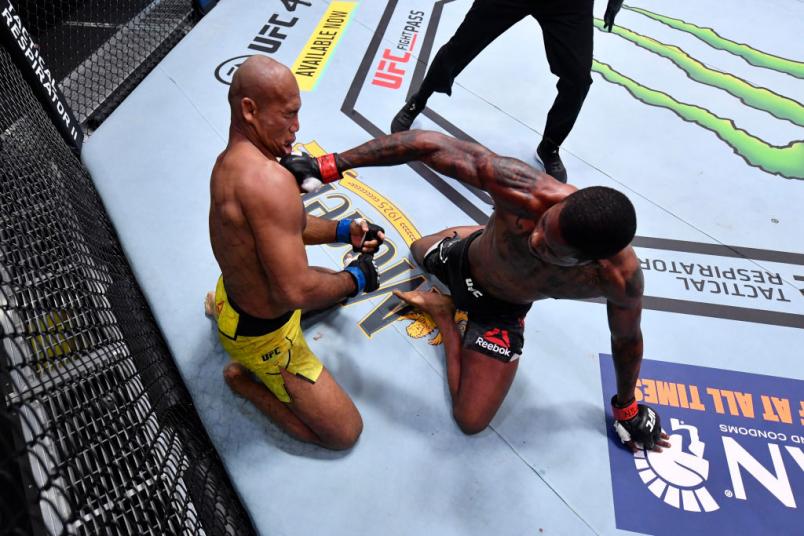 The year of middleweight contender Kevin Holland continued in spectacular fashion, as he earned his fifth victory of 2020 with a first-round knockout of Ronaldo “Jacare” Souza.

Souza scored a takedown seconds into the fight, but Holland got back to his feet after landing some hard elbows. Souza stayed locked on to the Texan and put him back on the mat. But as Holland talked to Souza, he began to pull free, and as he did, he jarred the Brazilian with a right hand. A few more followed, and just like that, the fight was over. The official time of referee Mark Smith’s stoppage was 1:45 of round one. 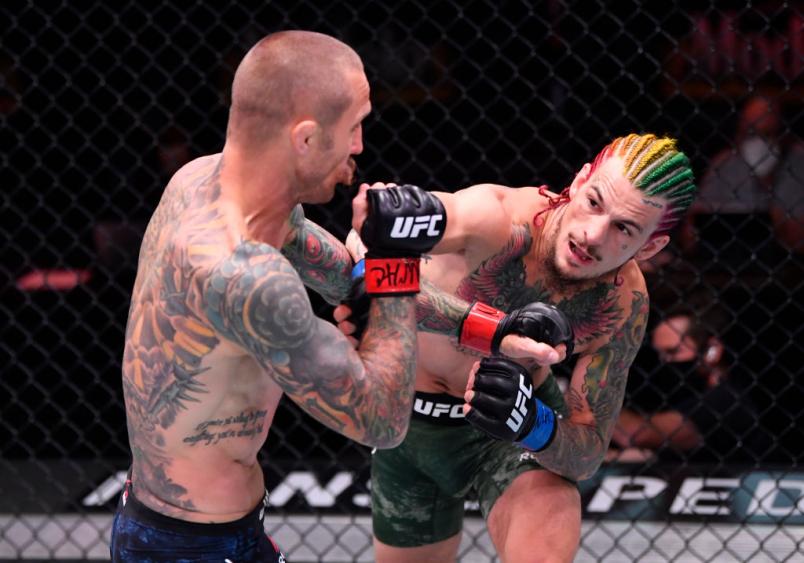 Wineland landed the first significant punch of the fight, a right hand upstairs in the second minute, but O’Malley took it well and drilled Wineland with a right hand a minute letter. It was a sign of things to come, as another right hand landed flush and knocked Wineland down and out, with no follow-up shots necessary as referee Herb Dean stopped the bout at 1:54 of round one. 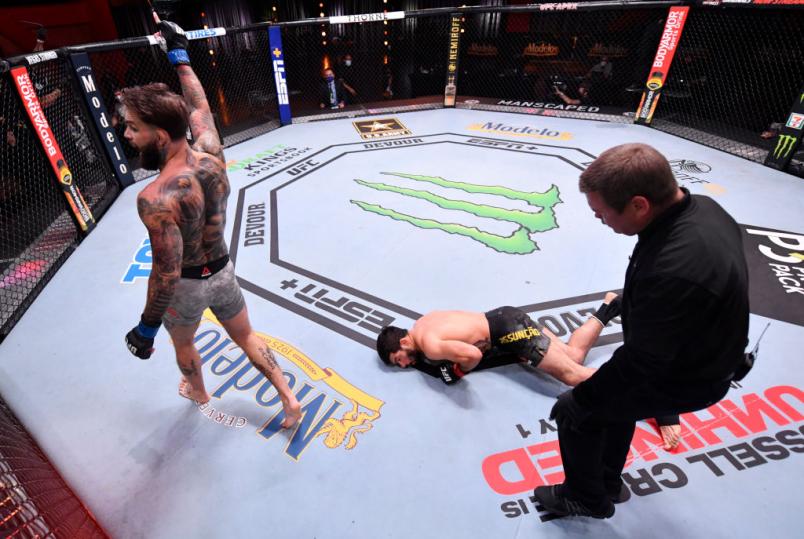 JUNE 06: Cody Garbrandt celebrates after his knockout victory over Raphael Assuncao of Brazil in their bantamweight bout during the UFC 250 event at UFC APEX on June 06, 2020 in Las Vegas, Nevada. (Photo by Jeff Bottari/Zuffa LLC)

Garbrandt put together a disciplined, technical attack in the opening frame, with his kicks to Assuncao’s leg his main weapon as he piled up the points. Assuncao did get in his shots, though, an impressive feat given the gap in speed between the two.

The battle remained close in the second, but a flash knockdown scored by Garbrandt with a little over a minute left was probably going to get him the round before “No Love” made sure there would be no third frame, as a vicious right hand in the midst of an exchange ended the fight immediately at 4:59 of round two. 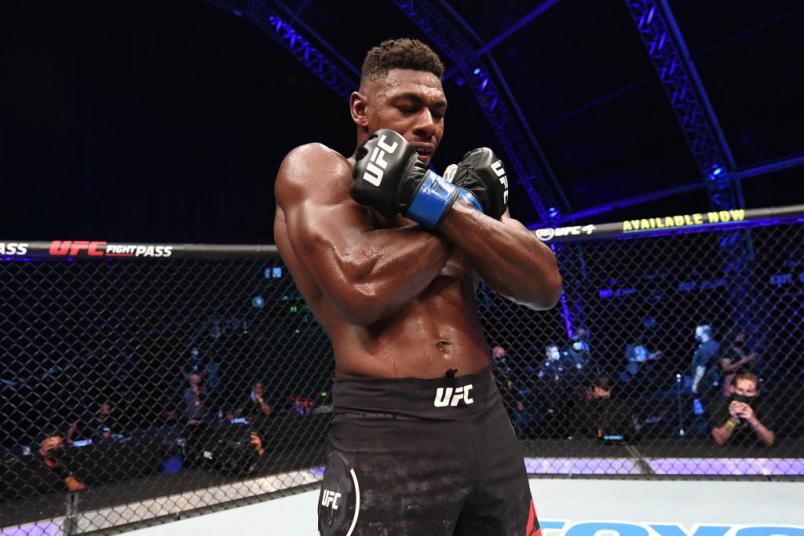 Joaquin Buckley handed middleweight prospect Impa Kasanganay his first pro loss and he also put his name in the race for Knockout of the Year in the process as he finished his foe in the second round.

Not surprisingly, Buckley was swinging for the fences, and he rocked Kasanganay early, but North Carolina prospect cleared his head and got back to business. Just before the midway point, Buckley got a takedown that resulted in a brief stay on the mat, but he was doing his best work on the feet, as he tested his opponent’s chin on a regular basis.

Buckley kept the heat on in the second, and while it didn’t look good when Kasanganay caught one of his kicks, the St. Louis product didn’t hesitate to respond, as he delivered a jump spinning back kick, and that was the end of the fight. The time of referee Kevin Sataki’s stoppage was 2:03 of round two.