No UFC belt has been around longer than the heavyweight title, which made its first appearance at UFC 12 and has been in rotation ever since.

It’s also the title that has changed hands the most times, as there have been 19 undisputed champions and counting, along with five interim titleholders. And until recently, no one had been able to successfully defend the heavyweight strap more than twice consecutively without getting knocked off.

Stipe Miocic broke that record earlier this year and looks to earn his fourth successful title defense next weekend in Las Vegas when he takes on light heavyweight champion Daniel Cormier in the colossal UFC 226 main event, but before we get to that sure-fire instant classic, here’s a look back at some of the most iconic heavyweight title fights in UFC history.

You can’t do a list like this and not include the very first time the title was won, especially not when it looked to be the dawning of a dominant era inside the Octagon.

Coleman won his first five UFC appearances in impressive fashion, claiming tournament victories at UFC 10 and UFC 11 with victories over the likes of Gary Goodridge, Don Frye and Brian Johnston. The former Olympian and Division I National champion was an absolute powerhouse who introduced ground-and-pound into the sport.

Severn entered as the reigning Superfight champion and was riding a nine-fight winning streak that included avenging his previous Superfight loss to Ken Shamrock and beating Paul Varelans, Tank Abbott and Oleg Taktarov in one night at Ultimate Ultimate 1996. “The Beast” had been the standard-bearer for how to effectively use wrestling in the Octagon up to that point, but all of that would change in Dothan, Alabama.

Coleman needed less than three minutes to maul Severn and become the first ever UFC heavyweight champion. His size, strength and style of grinding opponents into oblivion, “The Hammer” seemed poised to hold onto the belt for a long, long time.

Coleman’s title reign lasted 170 days and the quick transition to a new champion would end up being a harbinger of things to come in the heavyweight ranks.

Smith entered as a sizeable underdog, but the kickboxer was able to nullify most of Coleman’s offerings on the ground, using an active guard to keep the Ohio State product from doing much damage and allowing Coleman to gas himself out. Every time Coleman looked to advance, Smith would get back to guard and the time between Coleman’s bursts got longer and longer. Once the initial 15 minutes were up, “The Hammer” was spent and Smith took over, dominating the overtime periods and completing the monumental upset.

The former champion Sylvia and the surging contender Mir collided in a battle for the vacant heavyweight title in this one and it became one of the most memorable moments in UFC history.

Twenty seconds in, the fight hit the floor. Thirty seconds later, the fight was over, as referee Herb Dean jumped in to wave off the fight, leading to a brief moment of controversy, as no one fully understood what had happened. What Dean saw – and the audience would later see via slow-motion replay – was that Mir snapped Sylvia’s arm while cranking on an armbar, and though the former champion seemed eager to continue, the bout was rightfully stopped and a new champion was crowned.

With the win, Mir moved to 8-1 overall and appeared on the cusp of a lengthy run atop the heavyweight division, but just like with Coleman, it wasn’t meant to be. While Coleman was toppled in the cage, Mir was felled on the road, as a serious motorcycle accident put him on the sidelines, prompting the UFC to initially introduce an interim title and ultimately strip Mir of the heavyweight strap.

Couture’s third heavyweight title win was easily his most memorable, as the former champion ended a 13-month hiatus by moving back up to heavyweight to topple Sylvia in what has to be considered the defining fight of his illustrious career.

Following his loss to Chuck Liddell at UFC 57, “The Natural” hung up his four-ounce gloves and moved into the broadcast booth, but with Sylvia short on challengers, the 43-year-old Couture stepped up to the plate and took out the towering heavyweight champion.

While the fight as a whole was far from thrilling, it started off with a bang as Couture hit Sylvia with the Dan Henderson two-piece – a low, inside leg kick followed by a clubbing overhand right – that put the champion on the canvas in the first 10 seconds.

If you ever want to know why Couture is such a revered figure despite a 16-8 record inside the Octagon, pop in the tape of this fight. This is what made Couture special. 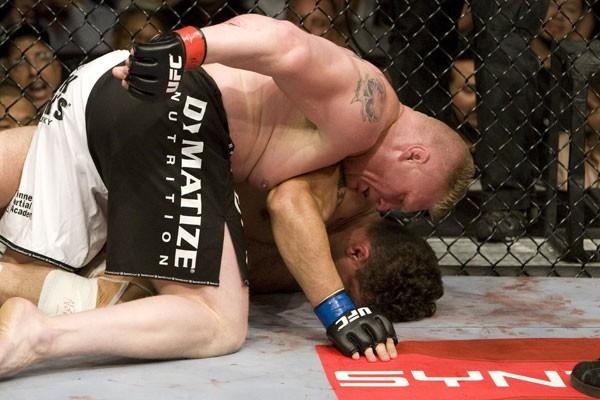 Arguably the biggest rematch in UFC history (at the time), the heavyweight title unification bout between Lesnar and Mir was the perfect bout to close out the UFC’s centennial show.

Mir had tapped Lesnar in the former WWE superstar’s promotional debut, but the contest was steeped in controversy. Referee Steve Mazzagatti paused the action early to deduct a point from Lesnar for punches to the back of the head without giving the UFC neophyte any kind of warning and restarted them on the feet. When they went back to the ground and Mir locked up the fight-ending kneebar, Lesnar basically had to tap twice.

The tension between the two grew from there and when they finally found themselves inside the Octagon with one another again, it was more grudge match than title fight and the hulking wrestler made sure there was no controversy. Lesnar controlled Mir from top position throughout the first, opening him up a little bit with some punches, and early in the second, he unleashed a string of thudding blows that sealed the deal.

While Lesnar was sidelined due to diverticulitis, Carwin continued his unbeaten rampage through the heavyweight division, claiming the interim title with a first-round stoppage win over Mir at UFC 111 to set up a mid-summer unification bout with the returning champion.

The opening five minutes were all Carwin and, at various points, it seemed like he was one more good shot away from earning the stoppage victory and emerging as the undisputed heavyweight champion of the world. But that finish never came and when the second round was about to begin, a different picture emerged.

While Carwin shot a smiling Lesnar a wink to begin the frame, it was clear he was spent, and Lesnar took full advantage, easily putting Carwin on the canvas before setting up an arm-triangle choke and securing the tap.

To this day, the first-round beating doled out by Carwin remains a topic of debate and the center of numerous “Sliding Doors” discussions about what may have been had the fight been stopped.

Three months after Lesnar tapped Carwin to secure his place atop the heavyweight division, an undefeated 28-year-old who had long been considered a potential champion and appeared destined to enjoy the longest reign in the division’s history dethroned him.

Velasquez raced out to an 8-0 record to begin his career on the strength of a blend of skills and characteristics that were previously unseen in combination in the heavyweight division. He was the total package – a former Division I wrestler with excellent kickboxing, cardio for days and a nasty streak to go with it – and he steamrolled Lesnar. One of Velasquez’s early blows sent the champion tumbling across the cage and as soon as that happened, it was clear that a new champion was being crowned.

The American Kickboxing Academy product was the next generation of heavyweights – a guy that could do everything and keep a torrid pace in the cage – and it seemed hard to picture anyone toppling him after he trucked Lesnar to take the belt. 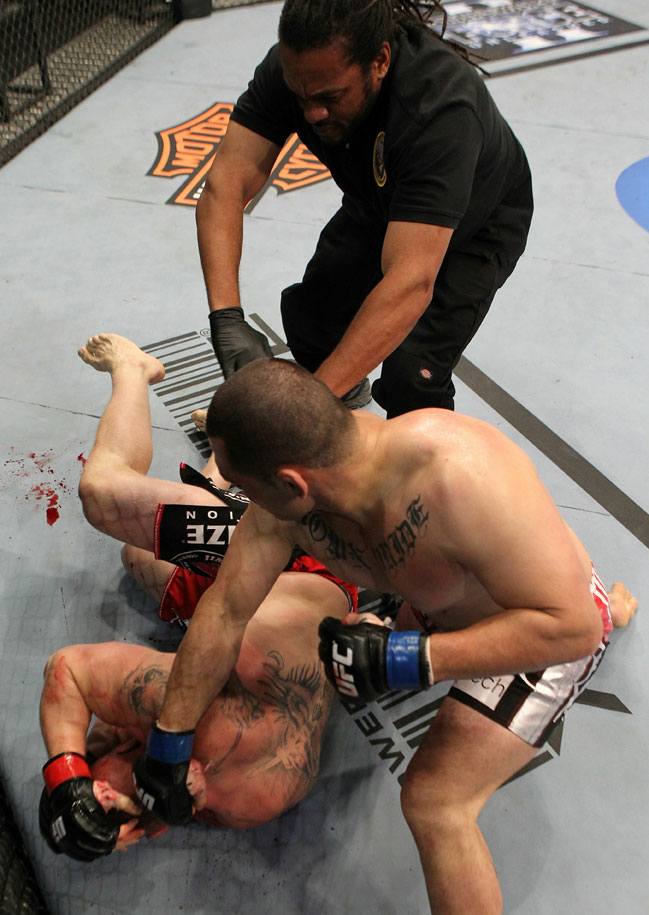 Like so many other potential long-term rulers of the heavyweight division, Velasquez was summarily dismissed before ever getting comfortable, as Dos Santos dropped his massive right hand on the side of the champion’s head in the opening minute of their title clash on FOX to claim the heavyweight strap.

Thirteen months later they did it again and fans were treated to the full Velasquez experience.

If you ever want to know why fans have always been enamored with Velasquez and look at the time he’s lost due to various injuries with such regret, go and watch this fight. For 25 minutes, the former champion put it on his chief rival, beating him from pillar to post and back again. “Cigano” may have won their first meeting, but Velasquez drew even and then some with this effort.

Originally scheduled to face Velasquez at UFC 180, a late injury to the champion left Werdum in the cage with Mark Hunt with an interim title hanging in the balance. The Brazilian dominated the action, finishing the durable veteran in the second round to grab a portion of the heavyweight title and set up yet another unification bout in the UFC’s big boy division.

Nearly seven months to the day after beating Hunt, Werdum would get his chance to share the cage with Velasquez and while he entered as the underdog, he left as the undisputed UFC heavyweight champion.

This was arguably the most complete and impressive performance of the veteran’s career – a lopsided win that showcased his improved striking and opportunistic submission game while extending his winning streak to six and putting him in the discussion as one of the greatest heavyweights in MMA history.

After beating Velasquez, Werdum’s first title defense would come at home in Brazil before a massive audience at Arena da Baixada in Curitiba against the surging American contender Miocic. Positioned as the final bout of a Pay-Per-View built around some of the biggest names to come out of the country, Werdum’s Brazilian homecoming was supposed to be a celebration, but it turned into a nightmare for “Vai Cavalo” instead.

Just after the midway point of the round, Werdum chased after a backpedaling Miocic when the Cleveland native suddenly planted his right foot and uncorked a powerful right hand that connected flush with the champion’s jaw. In a flash, Werdum was down and the fight was over.

The fans were in shock and so too was Miocic, who scaled the fence and repeated “I’m the world champ!” over and over while being mobbed by his coaches.