Unless you’re on the losing end, the upset is one of the greatest moments in all of combat sports. To see an underdog rise to the occasion and beat someone he or she had no business beating reminds you that no matter what fights look like on paper, the only result that matters is the one that is determined in the Octagon. Here are 10 of the most notable upsets of 2015.

Watch all the comeback fights now on UFC FIGHT PASS 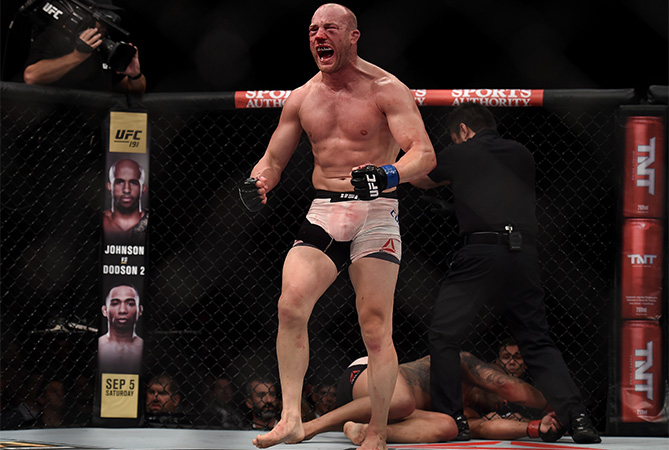 Fresh off a first-round knockout loss against Ovince Saint Preux in April, Patrick Cummins had to turn things around in a hurry when he faced off with Rafael Cavalcante at UFC 190 in August, a bout that took place in Feijao’s hometown of Rio de Janeiro. Yet even with the crowd on his side and Cummins’ face progressively looking worse for wear, Cavalcante had no answers for his opponent, who put himself in the light heavyweight top 15 with his third-round TKO win.< 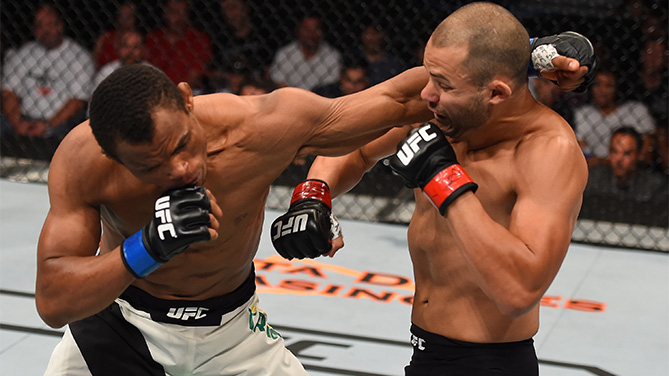 Entering their UFC Fight Night bout in Saskatoon in August, Brazil’s Francisco Trinaldo had the clear experience edge on Chad Laprise, but the Canadian was a TUF Nations winner, he was 3-0 in the UFC, and after coming off a Fight of the Night victory over Bryan Barberena, he was one win over the Brazilian veteran away from taking the next step in his promising career. “Massaranduba” had other plans, and at 2:43 of the first round, he let Laprise know about them, as he scored a TKO that silenced the crowd in the Great White North. 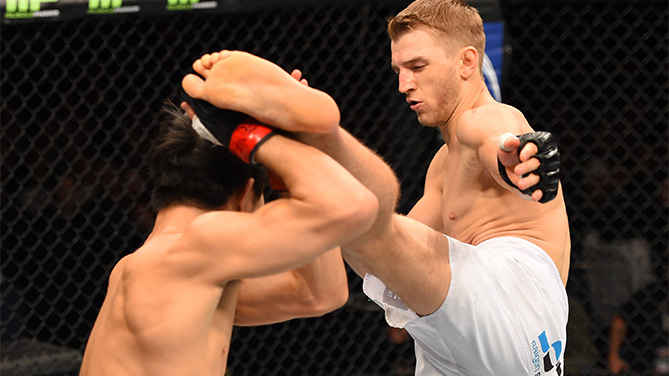 Longtime featherweight contender Hatsu Hioki hasn’t had the most impressive UFC run thus far, but against 145-pound prospect Daniel Hooker, most observers believed he still had the experience and skill set to defeat his opponent in their May bout. Hooker was unbothered by such talk and his confidence was evident from the opening horn. But it was his striking that was Hioki’s undoing, as the Japanese vet ate a kick to the head from his foe in round two, and that was all she wrote, with the follow-up strikes from Hooker cementing his biggest victory to date. It was Hioki’s first loss by knockout in 28 pro bouts. 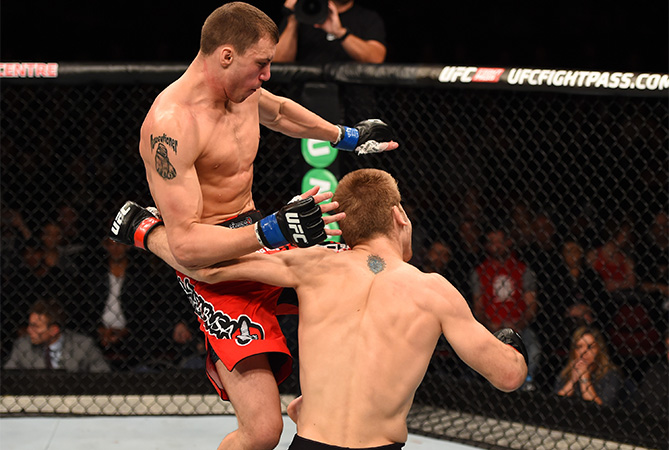 James Vick and Jake Matthews were both unbeaten heading into their May showdown in Adelaide, Australia, and if you were a betting man, the smart money was on Matthews being the one to keep his “0” intact. Vick had other ideas though, and despite building his perfect pro record in a lot quieter fashion than Matthews, he was just as talented as the Aussie young gun, and he proved it when he submitted his opponent via guillotine choke late in the first round. 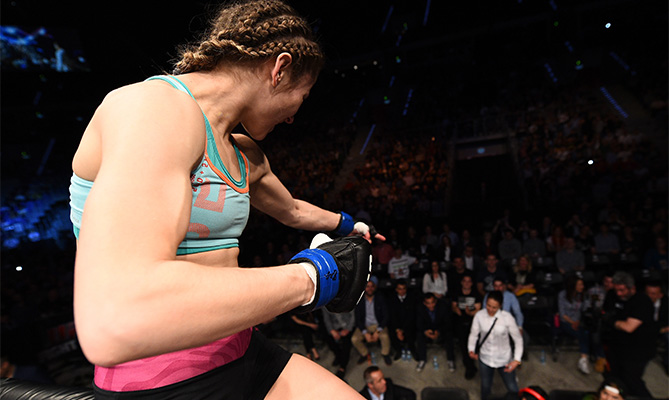 Maryna Moroz was unbeaten but relatively unknown – and frankly untested – entering her UFC Fight Night bout against Joanne Calderwood in April. 90 seconds later, Moroz was calling out strawweight champion Joanna Jedrzejczyk and few blinked an eye when she did it, considering that she had just submitted the highly regarded Calderwood, and didn’t just do it with a smothering ground game. Instead, the Ukrainian set up the finisher with a blistering striking attack that caught “JoJo” off guard and left her open for the fighting ending armbar. 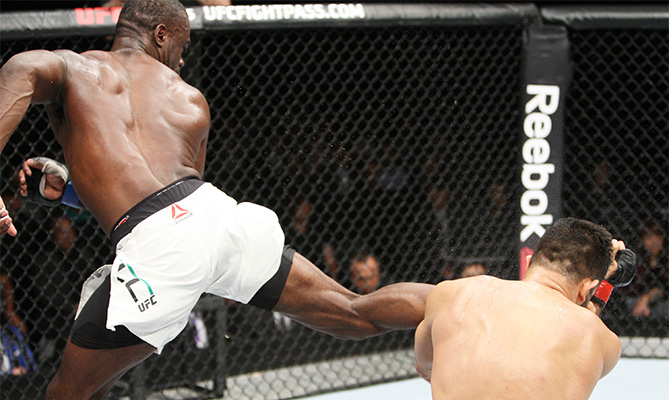 If you’re going on talent alone, Uriah Hall always had the potential to beat Gegard Mousasi. But when Hall to traveled to Japan to face the Dutchman, he was doing so halfway around the world, on short notice, and with a reputation of being erratic on fight night. Well, at Saitama Super Arena in September, the Hall that showed up was the best version we’ve seen yet, and after weathering a strong ground attack from Mousasi in the first round, “Prime Time” delivered a highlight reel knockout of the top contender in the second. 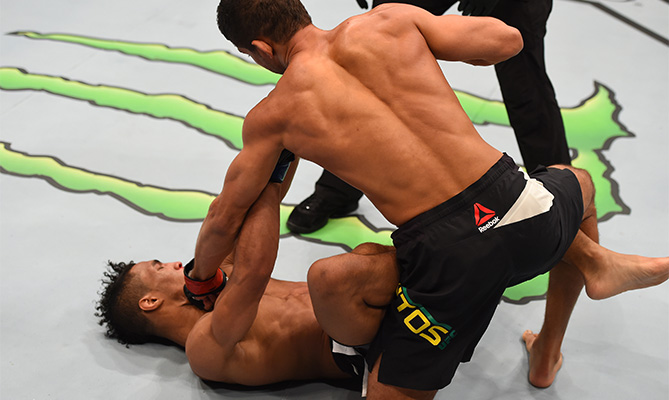 With an unbeaten 3-0-1 record in the UFC and a TUF Brazil title, Leonardo Santos shouldn’t have been a prohibitive underdog against Kevin Lee heading into their UFC 194 bout earlier this month, but he was. It was probably more of a testament to Lee’s upside than any insult toward Santos, but regardless of why the Brazilian was not expected to win, he went and won anyway, stopping Lee in less than four minutes and picking up a Performance of the Night bonus for his troubles. 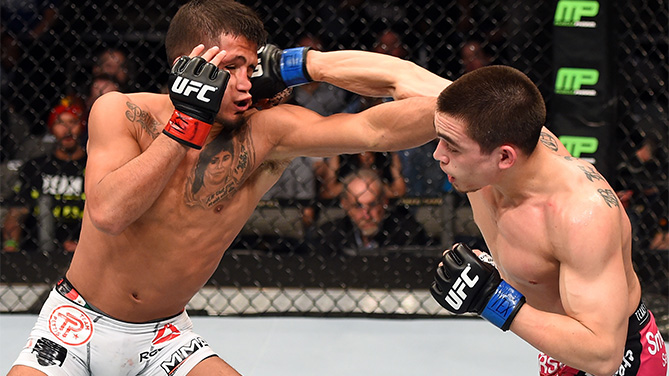 Sergio Pettis thought he had a fresh start in the UFC at 125 pounds when he squared off with Ryan Benoit in March, but on a bad night for Pettis and his brother Anthony, a victory just wasn’t in the cards, as Benoit survived a rough first round to stop Pettis in the second, handing “The Phenom” just his second pro loss. 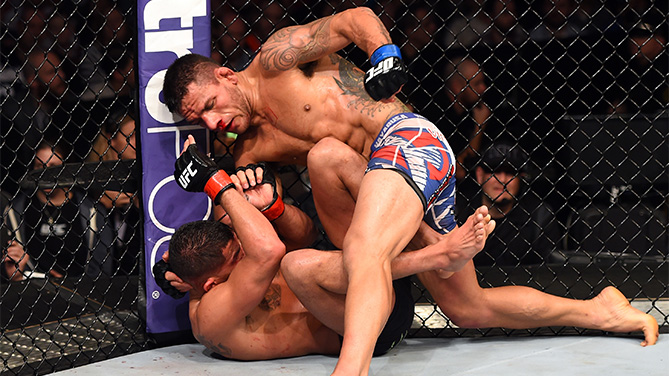 Anthony Pettis had everything on his side leading up to his March bout with Rafael dos Anjos. He had come back from a long layoff to impressively submit Gilbert Melendez, he was healthy, and he wanted to fight. The UFC granted his wish, but on fight night, everything went south as soon as dos Anjos cracked him in the eye with a left hand early in the first round, breaking his orbital bone in the process. From there, “Showtime” fought on sheer heart as dos Anjos delivered the defining performance of his career, a 25-minute master class that resulted in a unanimous decision win and the UFC lightweight championship. 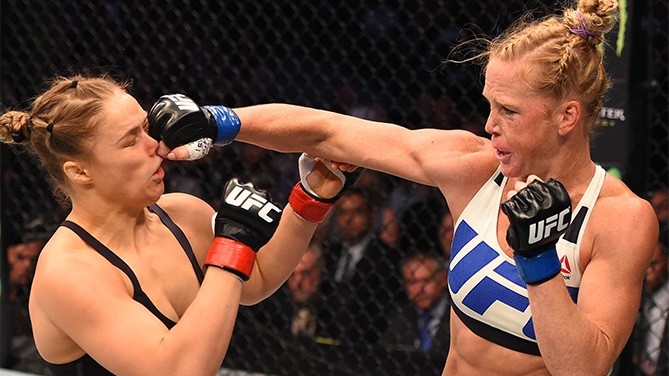 After Holly Holm’s November victory over Ronda Rousey, a lot more people came out and said they knew Holm would win than were there before the UFC 193 main event. That’s usually how it goes after a result like this, but suffice to say that after “Rowdy” Ronda wrecked the 135-pound weight class over the last couple years, she was a pretty sizable favorite against Holm, despite the New Mexico native’s boxing pedigree and unbeaten MMA record. And if you didn’t jump out of your chair when Holm landed the finishing blows in the second round, check your pulse, because that’s the key symptom of the Upset of the Year, and this one certainly garnered that reaction.

Go back and watch one of biggest moments in UFC history on UFC FIGHT PASS - Holm vs. Rousey