The 10: The Best April Action From Inside the Octagon

If you were to ponder what months historically featured the biggest UFC moments, chances are you would land on July and December first, as the organization has historically delivered a mid-summer blockbuster and a year-end spectacular.

In recent years, November has become host to a major Pay-Per-View in New York City and the annual Memorial Day Weekend event in Las Vegas has often been a marquee date on the UFC calendar as well.

As it turns out, the fourth month of the year has featured some of the most memorable moments in UFC history and I’m here to run them down for you as we approach a month that doesn’t just include a pair of championship bouts at Barclays Center (Ferguson-Nurmagomedov, Namajunas-Jedrzejczyk 2), but two Fight of the Year candidates in Glendale (Poirier-Gaethje, Condit-Brown) and an intriguing lightweight showdown in Atlantic City (Barboza-Lee).

At the time, this was the most anticipated fight in UFC history, as Shamrock had been waiting for a chance to face Gracie for a second time ever since he lost to the Brazilian jiu-jitsu ace in the semifinals of UFC 1 in Denver.

Don’t forget: Shamrock didn’t take part in the second UFC and bowed out with an injury after Gracie was unable to continue following his grueling battle with Kimo Leopoldo at UFC 3.

Shamrock was far more prepared to deal with what Gracie brought to the table this time around and successfully avoided getting caught in any submissions, while Gracie was content to work off his back, patiently searching out openings and opportunities.

But neither was able to find a finish and the bout was halted after 30 minutes of regulation time and a six-minute overtime period, producing one of the great debates in MMA history: who would have won if there were judges scoring the fight? 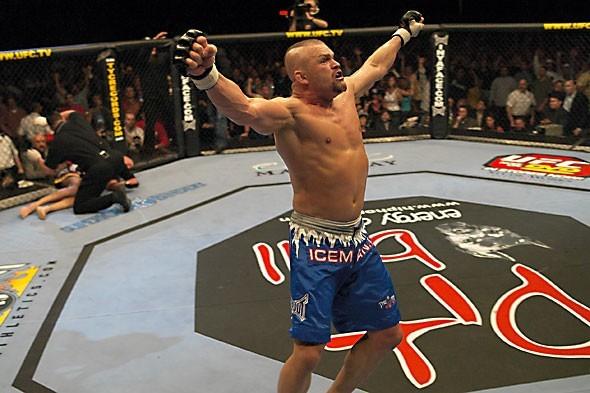 More than a year in the making, this was a clash between arguably the two biggest stars in the sport at the time and the first of two fights in a rivalry that continues to simmer to this day.

The first five minutes were largely uneventful – both guys landed a couple decent shots, but it was mostly a feeling out process between the former training partners turned foes. However Liddell appeared to rock Ortiz in the waning seconds of the opening frame and came out swinging in the second, swarming after “The Huntington Beach Bad Boy” backed up against the fence.

Liddell pressed forward and unloaded, crashing home a torrent of powerful shots that left Ortiz collapsed on the canvas, his face busted up and his ego bruised.

What more can be said about the most important fight in UFC history?

This battle not only marked the culmination of the first season of The Ultimate Fighter, but also became the fight that ushered in an unprecedented run of success for the organization, carrying it to new levels of popularity and mainstream attention in the process.

The three-round battle of attrition remains entertaining to this day, but its impact on the UFC and the sport as a whole is what makes it such a lasting, pivotal moment almost 13 years later.

We move from the most important fight in UFC history to the biggest upset to ever occur inside the Octagon.

Serra earned his shot at St-Pierre by winning the welterweight competition on Season 4 of The Ultimate Fighter and entered the contest as a massive underdog. GSP was less than five months removed from beating long-time champ Matt Hughes to ascend to the throne and was expected to lord over the division for the foreseeable future.

But no one told Serra.

The Long Island native put St-Pierre on roller skates with a looping right and a short right inside before swarming the dazed champion and overwhelming him with a barrage of strikes on the ground to claim the title.

Cro Cop made a name for himself in PRIDE, decimating opponents with thunderous kicks. Gonzaga was a respected Brazilian jiu-jitsu black belt. Most saw this as an old school clash of styles – striker vs. grappler – with a shot at heavyweight champion Randy Couture hanging in the balance.

With 10 seconds remaining in the opening round, Gonzaga “Cro-Copped” Cro Cop, sending him crashing awkwardly to the canvas after connecting with a perfect right high kick.

The naked kick came out of nowhere and connected flush, bringing the main event clash to a sudden and surprising halt, sending “Napao” on to challenge for championship gold while the loss became emblematic of the Croatian legend’s uneven time competing in the Octagon.

As with everything in life, the events that have transpired since this fight have altered the way we remember this contest in retrospect, but at the time, Edgar was viewed as a very good contender getting hustled into a championship fight with the greatest lightweight of all-time.

Then he marched into the Octagon and altered the course of the division.

Deploying what we now know as his trademark style, Edgar flitted in and out, peppering Penn with punches and mixing in quick takedowns that kept the champion off balance. While “The Prodigy” had some success of his own, the bout was contested on Edgar’s terms, at Edgar’s pace and the Toms River, New Jersey native was able to orchestrate the upset and claim the lightweight title.

Four months later, he’d deliver an even more emphatic performance in the rematch, cementing his standing atop the 155-pound ranks.

Prior to UFC 189 when the Irish fans blew the roof off the MGM Grand Garden Arena, this fight featured the loudest, most intense crowd reaction I’ve ever experienced in person.

The atmosphere in Toronto when the Canadian flag appeared on the four gigantic screens positioned above the Octagon inside the cavernous Rogers Centre and “Coming Home” started bumping through the building was electric and became something truly special over the final five minutes as the 55,000 people in attendance tried to will the Ontario native Hominick to victory over the final five minutes.

Aldo dominated the first four rounds and Hominick sported a massive hematoma on his forehead, but “The Machine” pressed on in his first professional appearance in his home province, winning the last round and producing one of the most memorable moments in UFC history and giving me an experience I will never forget.

McGregor has become a megastar, but this is the fight that started it all in the UFC.

A two-weight world champion under the Cage Warriors banner, there was a ton of hype surrounding the Irish new arrival that walked to the cage bare-chested, wearing a pair of simple black shorts and none of the tattoos that now decorate his torso. He was an upstart looking to make a statement and my word did he make a statement.

Power, poise and precision – those were the key takeaways from McGregor’s fight with Brimage. He didn’t rush anything. He picked his spots, but when he connected, it had an impact and once he had the former TUF competitor hurt, he pounced and got the finish.

Five years later, he’s accomplished his goal of simultaneously holding two belts in the UFC and has become the biggest star in the sport.

If anyone wanted to argue this was the most entertaining women’s fight in UFC history, you wouldn’t get any blowback from me.

These two ladies went toe-to-toe at a break-neck pace in this one, with both women having their moments. Heading into the third, Tate was ahead on the cards and had dictated the tempo, but Zingano came out in the third and turned the tables, taking charge of the action and putting it on the former Strikeforce titleholder. Elbows on the ground softened Tate up and when she looked to stand, Zingano buried a series of serious knees into her face, finishing things off with a massive elbow that brought the fight to a close.

Everything would go haywire for Zingano after this performance, but on this particular April evening, “Alpha” became the first mother to earn a victory in the Octagon by collecting a memorable finish against one of the best female fighters in mixed martial arts history.

Johnson has delivered a number of impressive performances during his unbeaten run in the flyweight division, but this might be the one that highlight why “Mighty Mouse” is one of the most incredible competitors to ever grace the Octagon.

While he was never in any danger, the young Japanese challenger made things difficult for the champion and this fight showcased Johnson’s ability to make adjustments on the fly and established beyond a shadow of a doubt that he was not someone content to win on the scorecards.

Horiguchi did a tremendous job defending takedowns and moving in space, making Johnson work extra hard to cut off the cage and get him on the canvas. Over the course of the fight, the champion kept making reads and implanting changes, listening to the advice and direction of his corners Matt Hume and Brad Kertson to find greater success.

And then in the fifth, Johnson started dominating and controlling with his takedowns, and as the clock was ticking down, the champion finished things off by forcing Horiguchi to tap out to an armbar with a solitary second remaining in the fight.