The 10: Awesome Action in the Octagon this September

As the scorching heat of the summer begins to wane and the leaves start to change colors, things in the UFC keep moving along at torrid clip as the arrival of September brings four consecutive weekends with live action for your viewing enjoyment.

While this month doesn’t feature a historic Pay-Per-View like UFC 200 or an epic rematch like the one between Conor McGregor and Nate Diaz that headlined last month’s biggest event, the line-up for the next four events boasts a champion defending his title at home, familiar names returning to action, potential contenders jockeying for position in their respective divisions and some guy named Punk.

Here’s a look at the most must-see fights on the month ahead.

Competing for the first time since his narrow championship loss to Daniel Cormier last fall in Houston, Gustafsson returns to action against Poland’s Blachowicz in the penultimate bout of this month’s initial event in Hamburg.

Gustafsson is in a strange position right now – he’s lost three of his last four, but two of those bouts have been title fights that went right down to the wire, making it clear that “The Mauler” is one of the elite competitors in the light heavyweight division.

For the 29-year-old Swede, he sees this weekend’s meeting with Blachowicz as a reset point – a chance to close the book on his championship setbacks and start showing that he’s grown since those battles and won’t come up short the next time he challenges for UFC gold. As for Blachowicz, this is a golden opportunity for the Polish standout to skip to the front of the line in the 205-pound ranks.

With 80 career professional bouts between them and countless years spent in the upper echelon of the heavyweight division, it seems weird that Arlovski and Barnett have never crossed paths before this, but history’s loss is Hamburg’s gain as these two battle-tested veterans will lock up in the last bout of the evening on Saturday.

After a four-fight winning streak carried him into the title conversation, Arlovski has dropped two straight, but it’s not as dire as it sounds, as those losses came to the two men that will meet for the heavyweight title later this month; more on them later.

While Barnett has alternated wins and losses with significant space between bouts since returning to the UFC, “The Warmaster” remains a dangerous threat for anyone thinking he’s simply an established name to add to their resume.

This one has a throwback feel to it and should be an exciting way to close out the first event of the month.

This one should be fun.

After earning a Top 10 ranking as an undersized bantamweight, Andrade made the move down to strawweight and instantly established herself as a contender by putting a beating on former title challenger Jessica Penne in her divisional debut.

The diminutive Brazilian is an aggressive powerhouse that never takes a backwards step, and with a similar performance in her sophomore outing, Andrade could put herself on the short list of potential title challengers heading into 2017.

Calderwood has rebounded from her stunning upset loss to Maryna Moroz with a pair of strong performances, grinding out a win over Cortney Casey at home in Scotland before finishing Valerie Letourneau in Ottawa earlier this summer.

Settled in to training at Tristar Gym in Montreal, Calderwood has started showing the form that earned her a “future star” label during her time under the Invicta FC banner, and if she strolls into “The Q” and styles on Andrade, she’ll be one step closer to establishing herself as such.

You have to hand it to Faber.

Just a couple months removed from a championship loss in his rubber match with Dominick Cruz, “The California Kid” is already stepping back into the Octagon, jumping into a dangerous matchup with the surging Rivera in a bout that doesn’t necessarily carry a lot of upside for the tenured Team Alpha Male leader.

Nonetheless, you know that on fight night, “California Love” will bump through the building, Faber will bop along as he walks to the cage, smiling from ear to ear, and once the door shuts, he’ll come forward looking for another win.

This is a big step up in competition for Rivera, but one that he’s certainly earned. The 27-year-old has stacked up 18 consecutive victories – 18! – including three straight since arriving in the UFC.
Back in January, he was able to grind out Brazilian veteran Iuri Alcantara, and if he manages to do the same thing to Faber in Cleveland, Rivera will put himself front-and-center in the title picture heading into the final three months of the year. 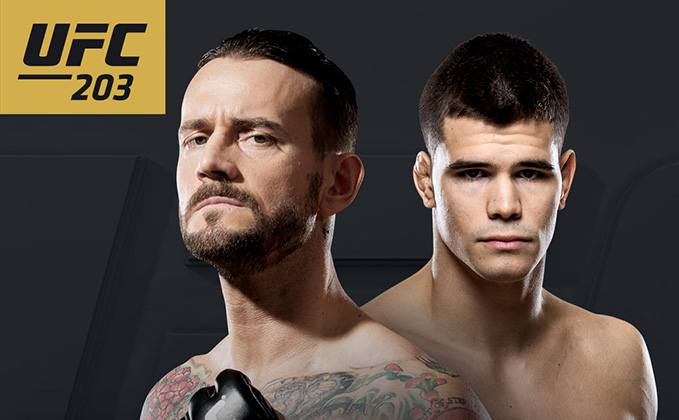 Has any fight ever carried as much anticipation while simultaneously being a complete crapshoot?

Nearly two years after signing on to the UFC roster and after a pair of serious injury setbacks, Punk, the former WWE superstar that has become a polarizing figure in mixed martial arts, will finally make his debut in the Octagon.

There has been a lot of speculation about what Punk will look like when he finally hits the cage, but all the chatter will finally come to an end in a couple weeks.

Gall lobbied for the chance to welcome Punk to the UFC and he earned his shot by quickly choking out Mike Jackson earlier this year. Now the 22-year-old neophyte gets his wish and a chance to instantly propel himself to another level of notoriety as “The Guy That Beat CM Punk,” provided, of course, that he wins. Otherwise, he’ll be “The Guy That Lost to CM Punk” and that title wouldn’t be as much fun to lug around for the next 20 years.

Before LeBron and the Cavs brought a title to Cleveland, Miocic accomplished the feat, knocking out Fabricio Werdum a couple months prior to “King James & Co.” dethroning the Golden State Warriors.

Now, the heavyweight champion defends his title on his home turf, welcoming one of the most accomplished heavyweights of this generation to the shores of Lake Erie.

Miocic has risen to the top of the division with an arsenal of weapons and assets that make him one of the most complete fighters in the sport today. He has sudden knockout power, but the gas tank to go five rounds at an alarming pace.

He has clean, technical boxing, but also wrestled in college and can put you on the mat when you’re not expecting it. It’s a “pick your poison” situation when you step in with Miocic, and with a raucous partisan crowd supporting him in his first title defense, don’t be surprised if we see him at his absolute best in this one.

But Overeem has been in these types of situations before and – to his credit – has reinvented himself over the last two years to find new ways to play to his strengths, while shoring up some of the weaknesses than limited him in the past.

Still a one-strike threat, the 36-year-old veteran has shown improved conditioning and patience during his four-fight winning streak and he tends to thrive when the spotlight is on.

Holding on to the heavyweight title has been one of the most difficult tasks in UFC history. Will Miocic thrill his hometown supporters or will Overeem remind Cleveland fans of their long, tortured history of losing when it matters the most?

This is one of those fights that flies under the radar – a matchup of talented, Top 10 middleweights that doesn’t get the attention it deserves because there are bigger names and bigger shows taking place all around it. But make no mistake about it: this is a great fight.

The mercurial Hall returns for the first time since losing to Robert Whittaker last November after his scheduled showdown with Anderson Silva was called off at the 11th hour.

Long viewed as one of the most dangerous strikers in the division and a potential star, it’s time for the former Ultimate Fighter finalist to show that he’s put all the pieces together and is primed to take the next step in his career.

Considering he’s on a four-fight winning streak and boasts a 6-1 record inside the Octagon, Brunson doesn’t get enough attention.

A late-bloomer who only started his pro career a little more than six years ago, the former D-II wrestling standout has collected three straight first-round stoppage wins and could put himself in line for a marquee matchup with a similar performance here.

What more can be said about Poirier since he’s migrated to the lightweight division? “The Diamond” has been shining brighter than ever, collecting four straight victories to become a legitimate title threat.
Brandishing the same power he carried at featherweight, but greater speed and better defensive movements, Poirier has looked outstanding and could insert himself in the title conversation with a fifth consecutive win.

Intent on halting Poirier’s climb and restarting his own is Johnson, who isn’t that far removed from his own four-fight winning streak that had people talking about title contention.

But after dropping a suspect decision to Beneil Dariush and getting beaten by Nate Diaz back in December, “The Menace” is now looking to reestablish his footing in the lightweight title chase and beating Poirier will allow him to do that in a hurry.

However this one plays out, there is no way that it won’t be exciting.

Every month there is one fight that people just aren’t talking about enough and this is that fight for September.

Trinaldo has quietly amassed a six-fight winning streak to land on the fringes of the Top 15 heading into this one.

After icing Chad Laprise with one big shot last summer and out-working Ross Pearson in Boston, the 38-year-old Brazilian won a wild back-and-forth against Yancy Medeiros last time out at UFC 198.

With back-to-back wins over Daron Cruickshank and Joshua Burkman, Felder has put last year’s two-fight skid behind him and returned to the aggressive, attacking roots that made him an intriguing addition to the lightweight ranks at the start of 2015.

“The Irish Dragon” was hustled into the deep end of the division after some early success, but now stands as a litmus test for “Massaranduba” as the two battle to see which of them will break into the rankings in the UFC’s deepest division.

Following her impressive Octagon debut at UFC 198, Cyborg now gets her first UFC headlining assignment, welcoming Sweden’s Lansberg to the cage in Brasilia for a catchweight bout at 140 pounds.

Cyborg has not lost in more than a decade and has been on an absolute tear of late, finishing five of her last six opponents inside the opening five minutes. The Muay Thai powerhouse is one of the most aggressive fighters in the sport, regardless of gender, and takes great pride in putting on thrilling performances in front of the Brazilian crowd.

Lansberg has the ultimate opportunity to instantly make a name for herself by knocking off Cyborg in her UFC debut. Like her opponent, “The Elbow Princess” hasn’t lost since tasting defeat in her pro debut, most recently picking up a second-round stoppage win over veteran Maria Hougaard Djursaa in March.

Will Cyborg’s dominance continue or will Lansberg shock the MMA world?