The 10: Awesome Action in the Octagon this August

Coming off the busiest, most action-packed month in UFC history, you would think the UFC might be inclined to have a bit of a cooling off period in August, but you would be wrong.

Though there are only half as many events as there were in July, the month ahead offers a comparable variety in terms of the types of events taking place and features the most anticipated fight of the summer.

Here’s a look at the best of the month ahead. 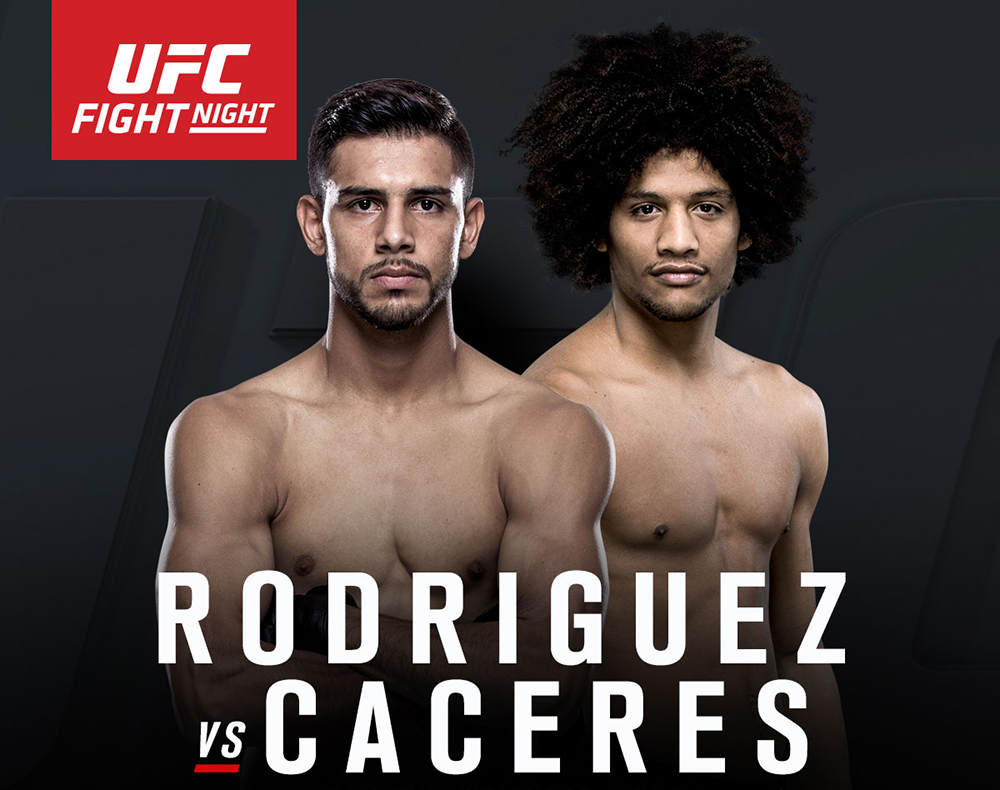 This matchup between veteran talents serves as the UFC FIGHT PASS Featured Prelim for this event and should be outstanding.

Swanson returned after a year recovering from injuries and recharging his batteries to pick up a decision win over Hacran Dias in April. Two months earlier, Dennis Bermudez snapped Kawajiri’s two-fight winning streak. Even though they’re coming in off opposite results, these two are in a comparable place – stationed inside the Top 15, looking to earn a victory in order to maintain their position and fend off the advances of the “Kiddie Corps” currently climbing the ranks.

One member of that youth movement that will be paying special attention to this bout is “The Korean Superboy,” Doohoo Choi, who lobbied for the opportunity to face the winner after his victory last month.
RELATED CONTENT: Full fight card | Yair Rodriguez - El Pantera | Free Fights: Rodriguez vs Fili | Caceres vs Pettis

If you’re looking for a sleeper pick for “Fight of the Month,” look no further than the main event of Salt Lake City’s inaugural show.

Now five years and 14 fights into his UFC career, Caceres enters this one off arguably his best performance to date – a three-round shutout of veteran Cole Miller at UFC 199 where the now 28-year-old Ultimate Fighter alum showed that he’s finally put some polish on the raw talent that always made him an intriguing prospect.

In Rodriguez, he’s facing one of the brightest young stars in the UFC – an electric, unpredictable striker who eschews game plans in favor of taking major risks that often result in something spectacular happening, much to the dismay of his coaches. Last time out, “El Pantera” connected with a flying head kick against Andre Fili that has to be seen to be believed, reiterating why many project the TUF: Latin America winner as a future championship contender in the featherweight division.

This one should be Street Fighter V come to life in the UFC Octagon and is definitely one you don’t want to miss.

Fresh off his first-round destruction of fellow emerging star Thomas Almeida, Garbrandt gets a veteran litmus test in the form of Mizugaki as a follow up.

“No Love” has collected four consecutive wins since joining the UFC to push his record to 9-0 overall and, in the process, the Team Alpha Male standout has established himself as the top young talent in the bantamweight ranks. But before he can move into the elite class in the 135-pound ranks, Garbrandt has to get through Mizugaki.

The 32-year-old Japanese fighter has been a tough out near the top of the division since giving then-champion Miguel Torres a run for his money at WEC 40. After back-to-back losses to current champ Dominick Cruz and Aljamain Sterling, Mizugaki rebounded with a decision win over George Roop last time out and looks to halt Garbrandt’s meteoric ascent in this one.

Meet the sneaky-good matchup that isn’t getting enough attention as the month kicks off.

Following an 18-month layoff and feeling better than he had in years, Story returned in May to notch his third straight victory, picking up a unanimous decision win over Tarec Saffiediene to remind everyone that he’s still a factor in the welterweight division.

Even though he says he’s just moonlighting at 170 pounds for a while, “Cowboy” has caused quite a stir (as he is wont to do) in his two appearances up in weight, stopping Alex Oliveira and Patrick Cote in back-to-back outings to earn a date with a fighter ranked in the Top 10. Quicker and in better spirits not cutting weight, Cerrone has quickly become a dark horse contender at his temporary address and might have to consider making a more permanent move with another win.

This is as no-nonsense a fight as you are going to find this month – two guys that just like stepping into the cage and slinging leather – and it should be all kinds of fun whether it lasts 15 seconds or the full 15 minutes.

Originally scheduled to take place last month in Chicago, this pivotal light heavyweight clash instead lands in the penultimate 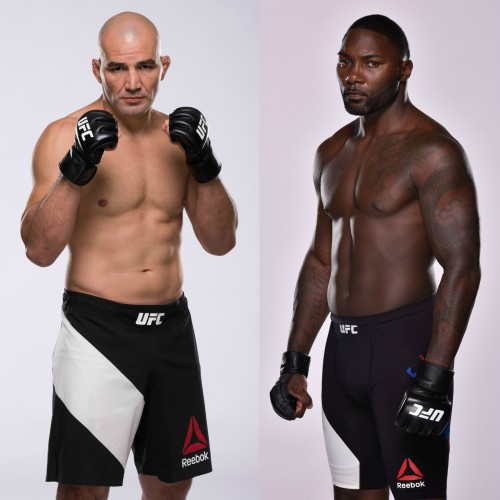 place on this month’s Pay-Per-View.

Teixeira asked for the bout after collecting a first-round knockout win over former champ Rashad Evans in April, noting that things at the top of the division were tied up (and they remain so) and that he and Johnson could make a little money punching each other in the face in the interim. “Rumble” was quick to oblige and will be looking for his third straight victory when these two share the cage and trade leather.

While getting punched in the face by either of these knockout artists doesn’t land on my personal list of fun things to do on a Saturday evening, watching it transpire absolutely does.

What started as a hastily thrown together replacement fight at UFC 196 has turned into the most anticipated rematch of the year, as Diaz and McGregor will lock horns for a second time with the tough veteran from Stockton looking for a second straight win and the Irish standout hoping to gain a measure of revenge.
RELATED CONTENT: The Exchange with Megan Olivi - Nate Diaz preview | Anytime. Any weight. Any where. | UFC 202 Extended Preview

The first fight was electric from the minute it came together and this one should be too. As great as the press engagements are sure to be – and they will be great – the action inside the Octagon is bound to be even better, with McGregor trying to correct what went wrong the first time and Diaz having a full camp behind him in hopes of duplicating the first result.

Has McGregor made the right adjustments to beat the long-time lightweight veteran or will Diaz prove to be “The Notorious” one’s kryptonite for a second time?

Get your popcorn ready.

Rather than tell you why this second meeting between these two veteran lightweights – both of whom picked up quick, impressive finishes at UFC 200 – is terrific and must-see TV, why don’t you just watch their first fight below and then try to tell me you’re not excited to see Rounds 4, 5 and 6:

Coming off her second place finish on Dancing with the Stars, Hollywood was courting VanZant, but the Team Alpha Male female made it clear she was keen on returning to the Octagon as quickly as possible and gets her wish with a date opposite Rawlings on FOX.

Coming off a stoppage loss to Rose Namajunas last December where she was battered and bloodied, VanZant has a lot to prove in this one. Thrust into the spotlight after her UFC debut, the 22-year-old is still a work-in-progress as a fighter, but her talent and upside shine through when she’s in the cage.

Will it be enough to get her back into the win column? Not if Rawlings has anything to say about it.

“Rowdy” Bec has picked up back-to-back wins after losing to Heather Jo Clark at the TUF 20 Finale, adding some refinement to the brawling, no quit style that made her an instant fan favorite under the Invicta FC banter and inside the Ultimate Fighter house. This is the most high profile bout of her career and an opportunity to crack the Top 15 with a win, so expect to see the best version of Rawlings yet when she steps into the cage in Vancouver.

On March 13, 2015, Pettis was on top of the world: UFC lightweight champion, cover of a Wheaties box, five straight victories; stardom was in his grasp. Since then, it’s been tough times for “Showtime,” as he’s dropped three straight, prompting a move to the featherweight division.

And he’s not getting an easy introduction to the featherweight ranks either, as he’ll share the Octagon with the mercurial Oliveira, a talented Brazilian with just one loss in his last six, but someone that has struggled to hit the 145-pound limit in the past.

This is a critical matchup for both men, as Pettis needs to halt his slide and show that he can be a factor in his new weight class, while Oliveira can cement himself as a contender with a victory over the former lightweight champion. 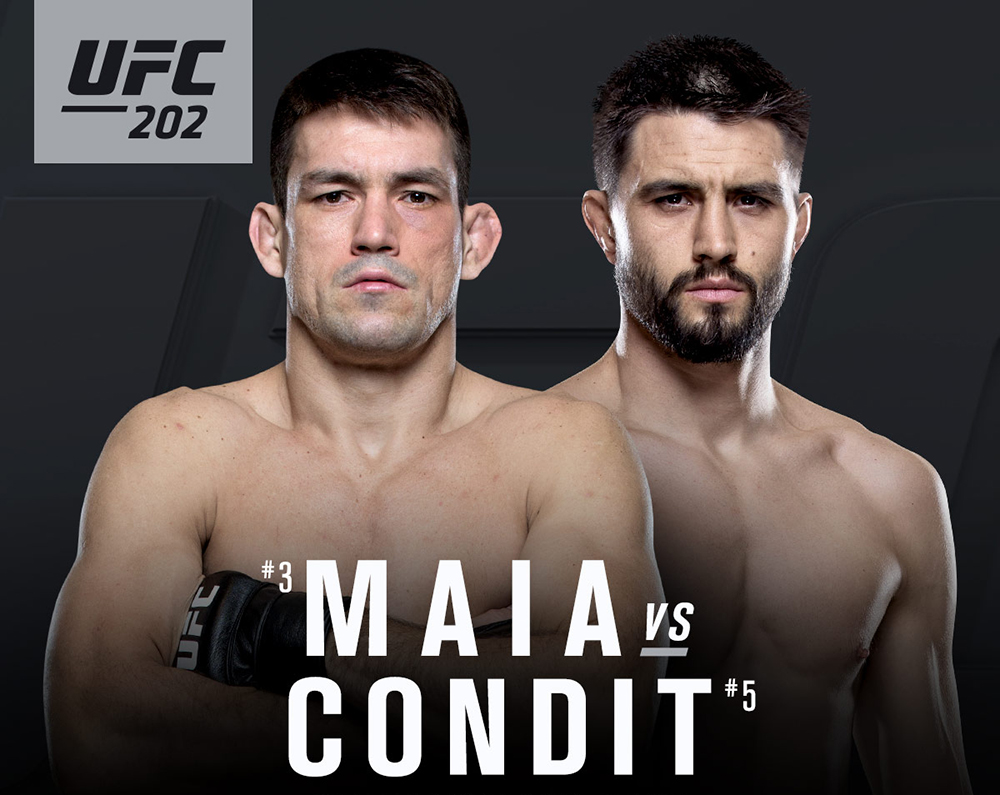 They don’t get much better than this in the welterweight division or the sport as a whole for that matter.

Originally penciled in at UFC 202, this pivotal clash moves forward a week and up the fight card, landing the main event spot in Vancouver, affording Maia and Condit an additional two rounds to work, if needed.

The Brazilian jiu-jitsu ace is in the best form of his career right now, having earned five consecutive victories, most recently tapping out Matt Brown at UFC 198. Having returned to his grappling roots, Maia is a nightmare matchup with nasty top control and a tendency to be three moves ahead of his opponents whenever the fight hits the canvas.

Condit lost a split decision to Robbie Lawler in an instant classic championship bout to kick off the year, but returns here in hopes of putting himself right back into the title conversation by halting Maia’s run of success. “The Natural Born Killer” is always exciting and tends to get stronger as the fight goes on, so you know he’s happy about getting an additional 10 minutes to work with as the headlining act.

The winner of this one will be on the very short list of potential title challengers in the welterweight ranks, though with the strap having changed hands last weekend and Stephen Thompson waiting in the wings for his shot at the gold, whomever emerges victorious from this one might have to step back into the cage one more time before fighting for the title.