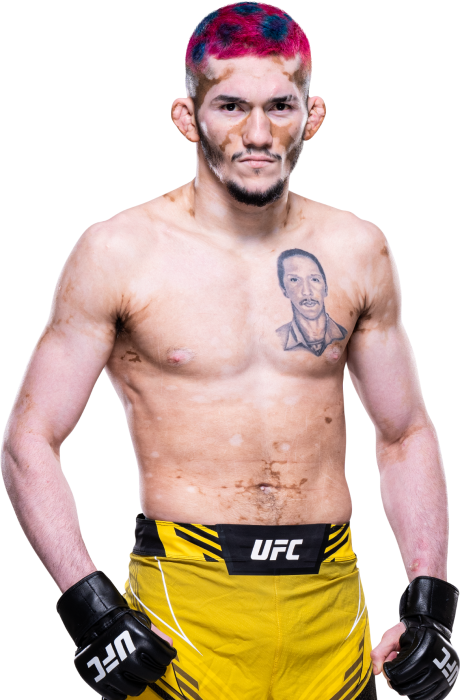 When and why did you start training for fighting? I started training in 2010 when some friends invited me to a gym. I put on all the gear to train some striking and got knocked out. Then another friend told me to come train jiu-jitsu, and I didn’t know what it was. The friend was injured and said he just needed one hand to submit me, which he did. I decided that I needed to train to beat that guy.

I started training but was very shy because I had been through a lot of discrimination since I was a kid and that had messed up my mind. I didn’t want to take my clothes off around people, or take pictures with others.

At one point I was working in the countryside and didn’t even want to go back to the city; I was like an animal and avoided human interaction. Fighting helped me overcome all of those things, so I started training seriously a began enjoying it.

I would get beat up a lot because I was training with pro MMA fighters. My family didn’t want me to keep fighting; nobody liked it. My brother was the only one to support me and said he would help me, but I didn’t even know if that’s what I really wanted to do.

I kept training, but my brother had an accident and passed away in 2013. That really affected me, but it also gave me a lot of strength to keep going.

What ranks and titles have you held? Many regional jiu-jitsu championships. Pará state jiu-jitsu and Muay Thai champion. Predador FC champion (second person to hold that belt, the first was Charles Oliveira)

Do you have any heroes? My father. In the beginning he didn’t support me because he thought fighters had to be strong, and I was just skinny. But then we created a very strong bond and I now call him before every fight. He calms me down and makes jokes. He knows how to give me strength and how to motivate me.

What does it mean for you to fight in the UFC? It’s the peak for any athlete, making it to the world’s largest organization. I haven’t reached my goal, and nobody knows me yet but soon they will.

Did you go to college and if so what degree did you earn? I was always very focused on studying; in high school I was told that needed to choose between studying or fighting. I would go to school in the morning, and when school was over, I would grab my cart to sell popsicles on the streets. In the afternoons, I would go train at the gym. I kept that routine for two years. After finishing high school, I decided to focus on just one thing, so I focused on MMA.

What was your job before you started fighting? I always had odd jobs, and I worked construction and sales. Recently I was working teaching classes at the gym to support myself.

Specific accomplishments in pro competition? Each fight had a story. The one that stands out the most was against Anderson Ferreira. I was offered that fight 15 days before the fight. He’s a knockout artist who had 13 KOs in 14 wins. Five days before the fight I fell and blew out my shoulder and couldn’t move it. My coach stretched it so I could move it on fight night, and I said, “Now I can knock him out.” I knocked him out and shocked everyone. So my biggest accomplishment is shocking people.

Favorite grappling technique: I have some crazy submissions that I can’t mention, I have to show it. Maybe I’ll show some next Saturday.

Favorite Striking technique: It’s not a secret that I like to kick. It’s fun.