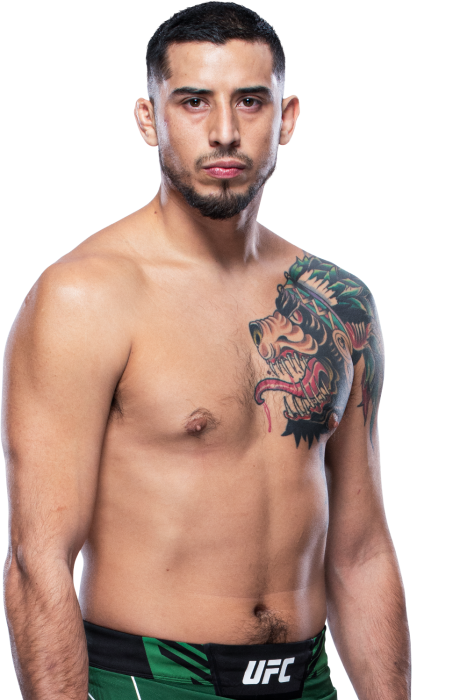 UFC History
UFC on ESPN (8/6/22) Gonzalez was submitted by Terrance McKinney via rear naked choke at 2:17 of the first round
UFC Fight Night (10/16/21) Erick Gonzalez was knocked out by Jim Miller at :14 of the second round

When and why did you start training for fighting? I started training wrestling at 13 before I entered high school. I started MMA at 15, but was in and out, so I officially started full-time at 20. I started fighting because throughout high school I got into a lot of fights in school. I was watching UFC and most of my friends would say, ‘You should start fighting. I bet you can make the UFC.’ I used to run a fight club in high school where about 30 kids would show up and we'd go at it with MMA gloves. We'd have like 15 fights every weekend with no hostility, just kids willing to go at it. It was all one on one. After high school I had no direction and just partied, but I wasn't happy, so I signed up for MMA as an amateur with no coach for my first three fights, where I practiced at my high school football field with my best friend, who had no knowledge of anything. I won my first three fights, then got picked up by my coach Ian Harris. I went 6-1 in one year of fighting, then went pro right after.
What ranks and titles have you held? I'm a blue belt in jiu jitsu but roll at a much higher experience since I only do no gi. MMA jiu jitsu is different and that's why I'm successful in fighting on the ground. I had one title fight as a pro, but lost a decision, which was for Combate Global.
Do you have any heroes? My hero is my mom. We went through a lot together. Her strength to give me a better life has motivated me beyond belief. She migrated from Mexico and had to go through the border illegally. I was lucky to be born in the USA, but we did suffer, and I lived in a car as a toddler, so I lived a rough childhood, but it made me the fighter I am today. my mom is definitely the person who has made me who I am and my only hero.
What does it mean for you to fight in the UFC? This has been my dream since I started and the only reason I wanted to do this. This feeling I have right now to know I have a contract and get to fight with a veteran, I'm on top of the world and can't wait to show what I am made of to everyone. I want to make my family proud and prove to everyone that hard work pays off. I started this journey seven years ago and I'm finally here, so I will show up ready for absolute chaos.
Did you go to college and if so what degree did you earn? Some college for automotive, but I didn’t finish.
What was your job before you started fighting? I currently work for a restaurant called Islands Fine Burgers & Drinks, and I bartend weekends. Before that, I helped my family run a restaurant called Habaneros Pepper, which was a Mexican food and Mexican vegan spot, and we had the #1 spot for three years.
Specific accomplishments in pro competition? I fought in a tournament in Peru for Combate Global where I fought three fights in one night. I made it to the finals and lost a decision. I also fought for the title but came up short in a decision loss.
Favorite grappling technique: Ground-and-pound. I call them hellbows!
Favorite Striking technique: Teeps, elbows, and kicks